Accessibility links
Uneasy At ABC, Stossel Finds Home At Fox Business In his new self-titled show on the Fox Business Network, John Stossel can peddle his contrarian, sharply libertarian beliefs. The refugee from ABC is unapologetic for embracing his ideology and says he feels entitled to speak to just about anyone, anywhere, to articulate his beliefs. 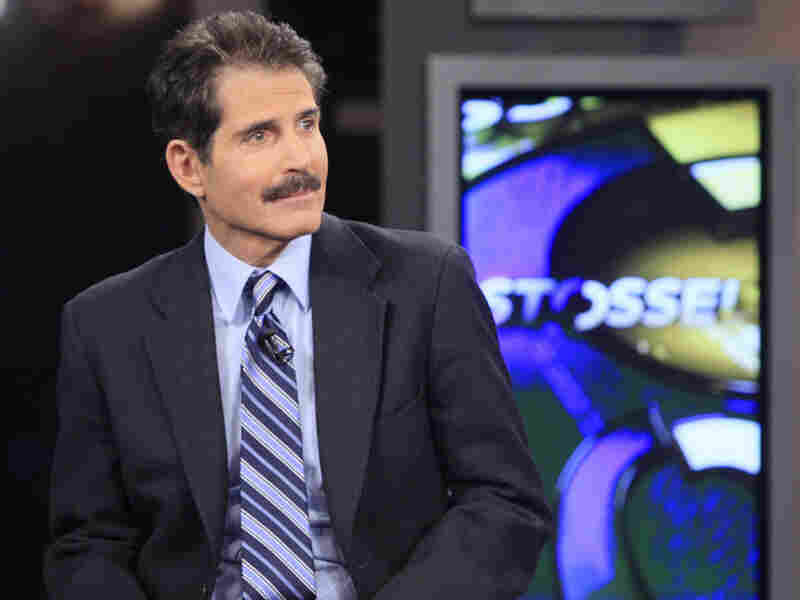 As a reporter and anchor for ABC News for 28 years, John Stossel transitioned from business-baiting consumer advocate to corporate-friendly contrarian.

"We want Mommy government to take care of us," Stossel says in an interview. "Any child wants Mommy and Daddy to step in. And if you're really not economically literate, you think that the specialists in Washington and state capitals can plan our lives better than we can." His consistent message: They can't.

Now, as host of the new show Stossel, Thursdays at 8 p.m. ET on the young Fox Business Network, he is taking that message into new terrain. And his journey captures a lot of the change buffeting the news industry.

Stossel looks and feels a lot different than his old show, ABC's highly produced and taped newsmagazine 20/20. It's live cable television — something that Stossel admits makes him a bit nervous. Applause signs light up to stoke the studio audience's roar.

But it's different in another way, too. The show promises viewers a steady stream of libertarian takes on issues of the moment — whether on health care policy, safety laws or the individualist novels of the late Ayn Rand.

Day 1 of Stossel: global warming. The program mocked scientists and government officials who warned of its dangers as elites seeking to curb liberties for no real reason.

"The globe is warming. Sea levels are going to rise. Does that mean that all these people are going to drown?" Stossel asked viewers, tongue firmly planted in cheek. "I'll be OK — I've got a life jacket and a raft — but are all these other people going to die?"

'But Is He A Journalist?'

During Thursday night's show, his like-minded guests were the experts — challenged only by a few college kids in the audience.

To that extent, O'Brien says, viewers know what they're in for: "No harm, no foul."

But O'Brien, who covered science, space and the environment at CNN for 17 years, says Stossel is cherry-picking stray facts and controversies. And in doing so, Stossel glosses over the overwhelming force of carefully peer-reviewed scientific research on climate change. O'Brien says that's troubling.

"I'd be very curious if John Stossel — if we had him on the conference call right now — if he would call himself a journalist in the purest sense," O'Brien says. "He's an advocate. He's somebody who stimulates discussion. He's a provocateur. But is he a journalist?"

Actually, no. At least, not by his current employer's definition. Fox Business designates him as an opinion show host — someone who falls under programming executives, not news editors.

"Here they have more airtime — and they are open to most everything," Stossel says in between rehearsals at the Fox Business studios in midtown Manhattan. "At ABC you would have a hundred meetings about what was appropriate, and I had many ideas they did not want to do. It was the main reason I came to Fox."

From Consumer Reporter To Free-Market Advocate

For years, Stossel held a singular place among broadcast network news correspondents: He was allowed to have an explicit point of view. Stossel says he always had an agenda. Originally, he said, he sought to confront and embarrass corporate wrongdoers. But over time, Stossel says, he realized government agencies failed to clean things up. He came to believe most of society's problems would be better served without state intervention.

One of Stossel's former bosses at ABC, Richard Wald, says that made him a valuable counterpoint to lazy reporting that relied upon liberal assumptions. ABC was generally careful to present him as offering an argument or point of view. But that didn't forestall all objections.

"Some of the criticism was that what he was doing wasn't based on fact; it was based on opinion," Wald says. "And to that extent, I think that his reporting — his reports — suffered."

Stossel has long been a vocal ideological figure off the air, too. In October, for example, he addressed Americans for Prosperity, a group that fosters opposition to Democratic health care proposals and is financed in large part by the libertarian billionaire David Koch. Stossel points out he donates all speaking fees to charity and says he agreed to the appearance before joining Fox.

Wald says he has no problem with Stossel's ideological beliefs, but that he shouldn't appear to endorse the activity of advocacy groups with his presence.

"I don't like it. I never have liked it," says Wald, who adds that it diminishes the independent standing of Fox's journalists.

Stossel is unapologetic for embracing his ideology and says he feels entitled to speak to just about anyone, anywhere, to articulate his beliefs.

"Hey, I don't think there's enough libertarian media out there," he says. "So this is a libertarian show; I'm going to favor libertarians."