Accessibility links
Was Ancient Historian One Of The First Spin Doctors? Thucydides' account of the war between Athens and Sparta has become an allegory of modern conflicts like the Cold War, Vietnam, Iraq and Afghanistan. But a new book about the ancient historian shows he may not quite have been telling the truth. 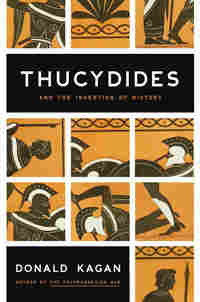 Without a man named Thucydides, the chances are slim that we'd know anything about the Peloponnesian War. A new book about the man attempts to correct what we know.

For more than a quarter of a century, starting in 431 B.C., two Greek cities faced off. Sometimes they confronted each other directly, and sometimes through proxies and allies. Thucydides recorded the details of the conflict throughout the war and, Yale professor Donald Kagan tells NPR's Guy Raz, "invented the modern understanding of history."

The war between Athens and Sparta has long since become an allegory of modern conflicts like the Cold War, Vietnam, Iraq — even Afghanistan. Historians and students of Thucydides all draw comparisons back to that ancient conflict. Kagan says Thucydides was the first person to apply rigorous scholarship in the approach to storytelling.

Kagan's own four-volume history of the Peloponnesian War is considered a seminal work, widely cited by students and scholars. His latest book, Thucydides: The Reinvention of History, delves into the ancient author and why he may not have always told the truth.

Thucydides was born around 455 B.C. to a noble Athenian family. During his youth, the Athenian empire was ruled by Pericles, who was something of a benign autocrat. But after Pericles' death in 429 B.C., the governance of Athens was taken over by a group of self-proclaimed democrats — most likely an affront to Thucydides' family, Kagan says, who would have had a deep skepticism of democracy.

In his history of the conflict between Athens and Sparta, Thucydides attempts to assign blame for Athens' eventual demise on those democratic leaders.

"I think he tried the best he could to be objective," Kagan says, but Kagan's new book is an attempt to revise and even correct some of Thucydides' accounts. Kagan draws upon other sources to argue that, at times, Thucydides is selective in the way he uses direct quotations and reconstructs events.

Thucydides' work remains required reading at the U.S. military academies, and Kagan says there's still good reason. "One of the wonderful things that his work does is to make it clear to us what is so little clear when most people get into war — and that is how terrible war is."

Thucydides: The Reinvention of History, Chapter One Excerpt

What is a revisionist? How can Thucydides be considered a revisionist, when he seems to have been the first man to write a history of the Peloponnesian War? What received opinions existed for him to revise? In a sense all historians are revisionists, for each tries to make some contribution that changes our understanding of the past. When we use the term revisionist, however, we generally mean something more fundamental: a writer who tries to change the reader's mind in a major way by providing a new general interpretation, one that sharply and thoroughly reexamines the established way of looking at a matter.

Given that Thucydides believed in the practical importance of history, we should expect him to be eager to set straight any errors of fact or interpretation that he found. But his critical spirit was brought to bear on a larger scale than merely factual detail. He uses the evidence of Homer, for instance, to show that it was the poverty of the Greeks, not the bravery of the Trojans, that was responsible for the length of the siege of Troy. He seems to have been the first to present the view that the Peloponnesian War was a single conflict, not a series of separate wars. Many other and greater and more controversial revisions will be discussed in this and later chapters.

If we grant that Thucydides had the instincts of a revisionist, what was there to revise? The answer is: the not yet fully formed or written opinions of contemporaries. In our own day these are easy to identify. Some of us still remember them from direct experience, and, in any case, modern revisionists usually confront and argue against their opponents. Thucydides' method is different. He argues with no one by name and presents no labeled alternative views, even to refute them, but gives the reader only the facts and the conclusions distilled from them that he deems necessary after careful investigation and thought. He has been so successful with this approach that for more than twenty-four hundred years few readers have been aware that any other point of view existed. But a careful reading of Thucydides himself and other ancient sources shows that there were different opinions in Thucydides' time and that his History is a powerful and effective polemic against them. Recovering these forgotten and obscured contemporary opinions and comparing them with Thucydides' own interpretations casts an interesting light on his mind and the significance of his work.

Reprinted from Thucydides: The Reinvention of History with permission from Viking Adult. Copyright (c) 2009 by Donald Kagan