Accessibility links
Allegations Of Mob Ties Add To Berlusconi's Woes Italian Prime Minister Silvio Berlusconi, whose term has been plagued by corruption charges, sex scandals and nasty divorce proceedings, now faces court evidence from a mobster linking him to the Mafia. And opposition to the longtime political survivor is growing. 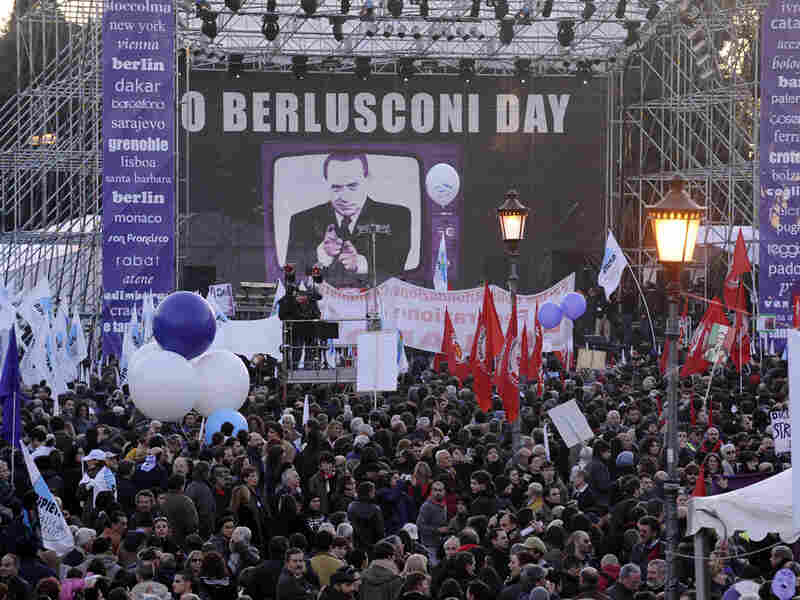 Demonstrators gather in downtown Rome during a "No Berlusconi Day" rally Dec. 5, asking for Italian Prime Minister Silvio Berlusconi's resignation. In the latest scandal to hit Berlusconi, a convicted mobster testified about the politician's links to the Mafia. Andrew Medichini/AP hide caption 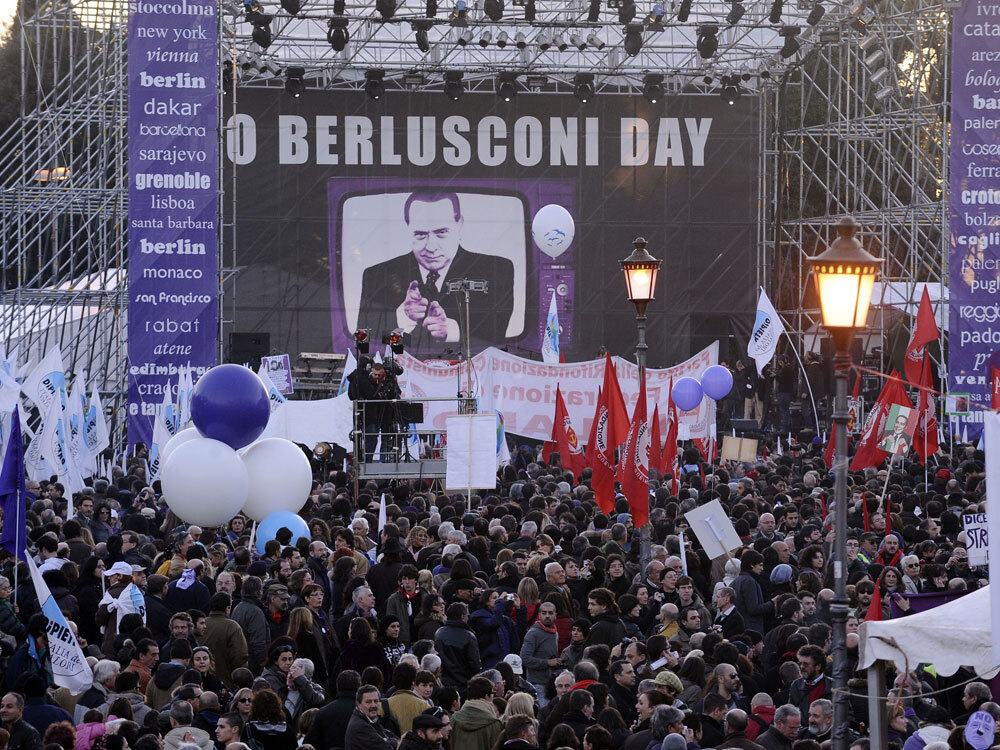 Demonstrators gather in downtown Rome during a "No Berlusconi Day" rally Dec. 5, asking for Italian Prime Minister Silvio Berlusconi's resignation. In the latest scandal to hit Berlusconi, a convicted mobster testified about the politician's links to the Mafia.

Italian Prime Minister Silvio Berlusconi was resting in a Milan hospital Monday after being hit in the face with a stone statuette at a political rally Sunday. He suffered a fractured nose, two broken teeth and a lip injury. The attacker — who has been arrested — has a history of psychiatric troubles.

In response to growing demands for his resignation, Berlusconi has become an even more polarizing leader. Just minutes before the attack, he railed against magistrates, whom he accused of conspiring against him, and he rejected allegations that he has ties to the Mafia.

In a maximum-security courtroom in Turin on Dec. 4., a convicted Mafia hit man now serving a life prison sentence for numerous brutal murders testified about alleged contacts between his boss and Berlusconi.

From behind a screen and surrounded by a phalanx of police, Gaspare Spatuzza recalled a 1994 meeting with his Mafia boss, who boasted of his connections.

"The boss spoke to me about Berlusconi, the owner of the TV network," Spatuzza told the court, "and he told me that thanks to the seriousness of Berlusconi and his Sicilian friend, Marcello Dell'Utri, we had the country in our hands."

Dell'Utri was co-founder of Berlusconi's political party. The court was hearing his appeal of a nine-year sentence for Mafia association.

Berlusconi's spokesman dismissed the testimony as Mafia revenge for the government's fight against organized crime. And Maurizio Gasparri, an official of Berlusconi's ruling People of Freedom party, was disparaging about Spatuzza.

"This kind of creature should rot in a dark jail cell for the rest of his life. The government won't be affected in any way by his testimony," Gasparri said.

Rumors have circulated for years that Berlusconi began his real estate career thanks to Mafia financing. Recently, speaking to his supporters, the prime minister railed against people who link Italy with the mob.

"If I ever find those who write TV series and books about the Mafia which give such a bad image of Italy across the world, I swear I'll strangle them," Berlusconi said.

The day after Spatuzza's testimony, hundreds of thousands of Italians marched through Rome for what was dubbed a "No Berlusconi Day." It was the first mass protest organized exclusively through the Web, not by political parties.

One demonstrator was Alberto Spampinato, whose brother was murdered in Sicily years ago for his investigative reporting. Spampinato, who monitors journalists threatened by the mob, said the prime minister's comments further endangered the lives of many reporters.

Giovanni Sardisco and his friends came to the demonstration in Rome from Palermo, Sicily. He said it's time to say "enough."

"The Mafia has infiltrated the palaces of power. It's up to the courts to determine whether Berlusconi is linked to the Mafia. But he always avoids trials through the statute of limitations or with custom-made laws. That's why we are here to protest," Sardisco said.

Investigative journalist Marco Travaglio has written several books claiming that Berlusconi has long had links with the Mafia. The prime minister and Dell'Utri have sued him several times, but Travaglio has always won in court.

"Thanks to Palermo court documents, we know that Berlusconi entered the political arena in 1994, both for his own interests and for those of the mob," Travaglio said.

In his business and political lives, Berlusconi has faced numerous investigations and trials. Nearly 20 pieces of legislation have been passed by his allies to help him avoid prosecution.

On Thursday, speaking in Bonn, Germany, to the congress of center-right European politicians, Berlusconi vented his anger at what he calls a conspiracy against him by communist magistrates.

"Sovereignty in Italy has been usurped from parliament by magistrates. But we have a big majority, and we'll amend the Constitution. Despite being defamed by the media, I'm stronger and stronger because my supporters know there's no one else as tough, as strong, and who has the balls that Berlusconi has," he said.

Several new bills are on a fast track in Parliament. If passed, the prime minister would be granted immunity from prosecution while in office.