Accessibility links
Hall Overton: Professor By Day, Jazzman By Night Hall Overton was a tall, modest, Midwestern, chain-smoking college instructor of classical music at Juilliard. But at the Jazz Loft, he was living, teaching music and playing piano with greats like Thelonious Monk.

A Professor By Day, A Jazzman By Night 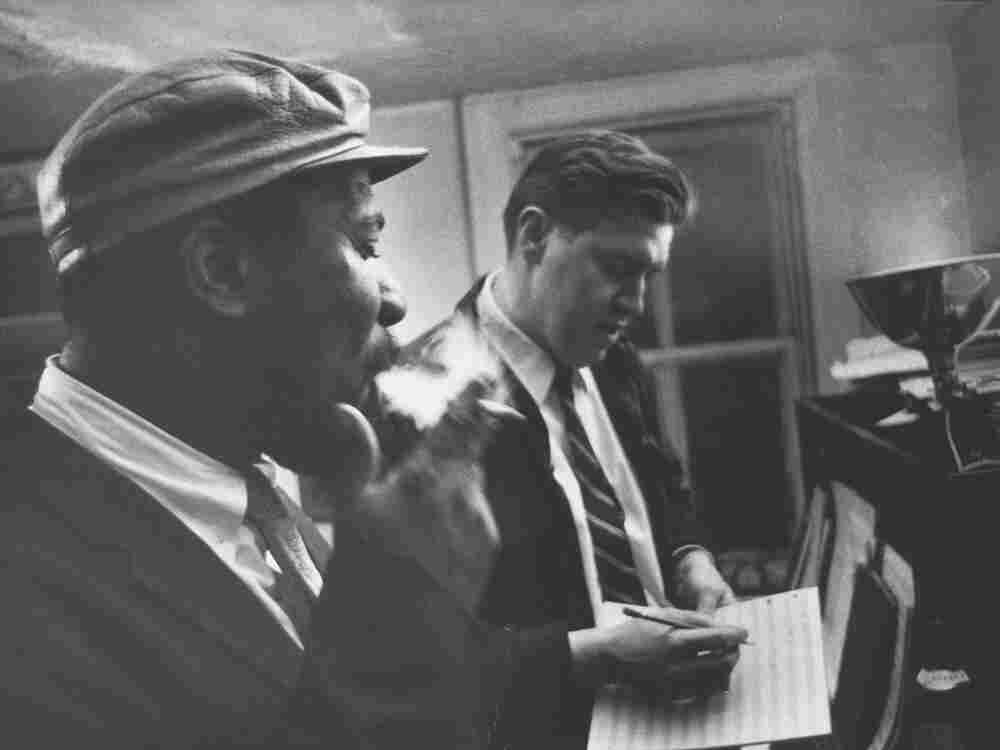 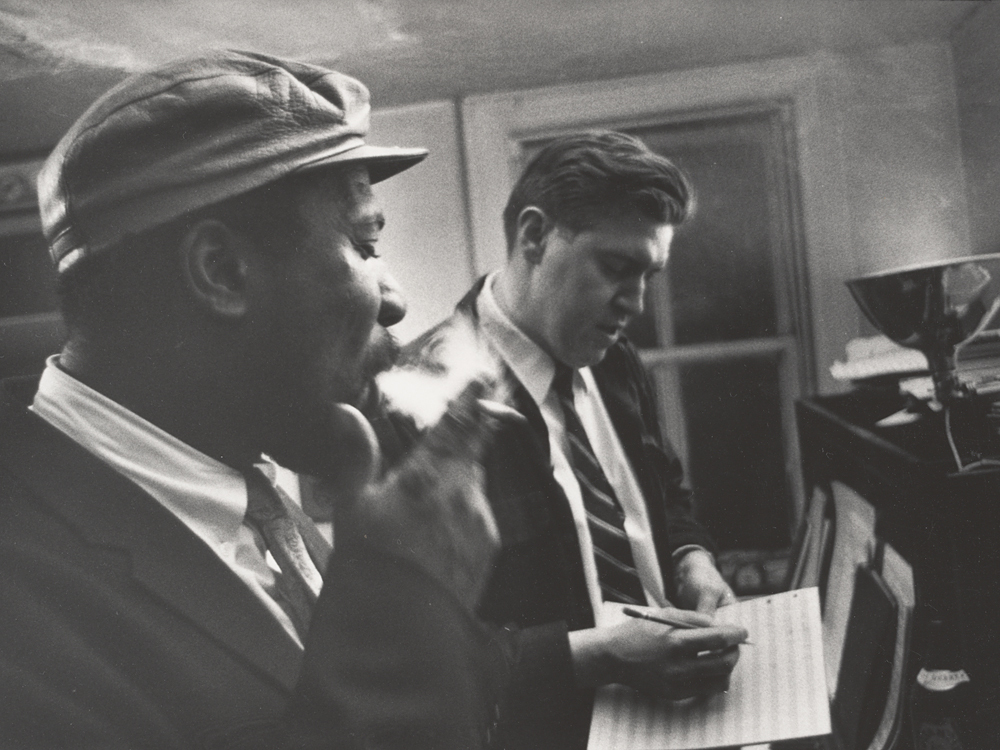 Thelonious Monk (left) worked with composer Hall Overton in the Jazz Loft to present large ensemble arrangements of his music at a February 1959 concert at New York's Town Hall. 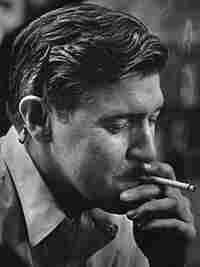 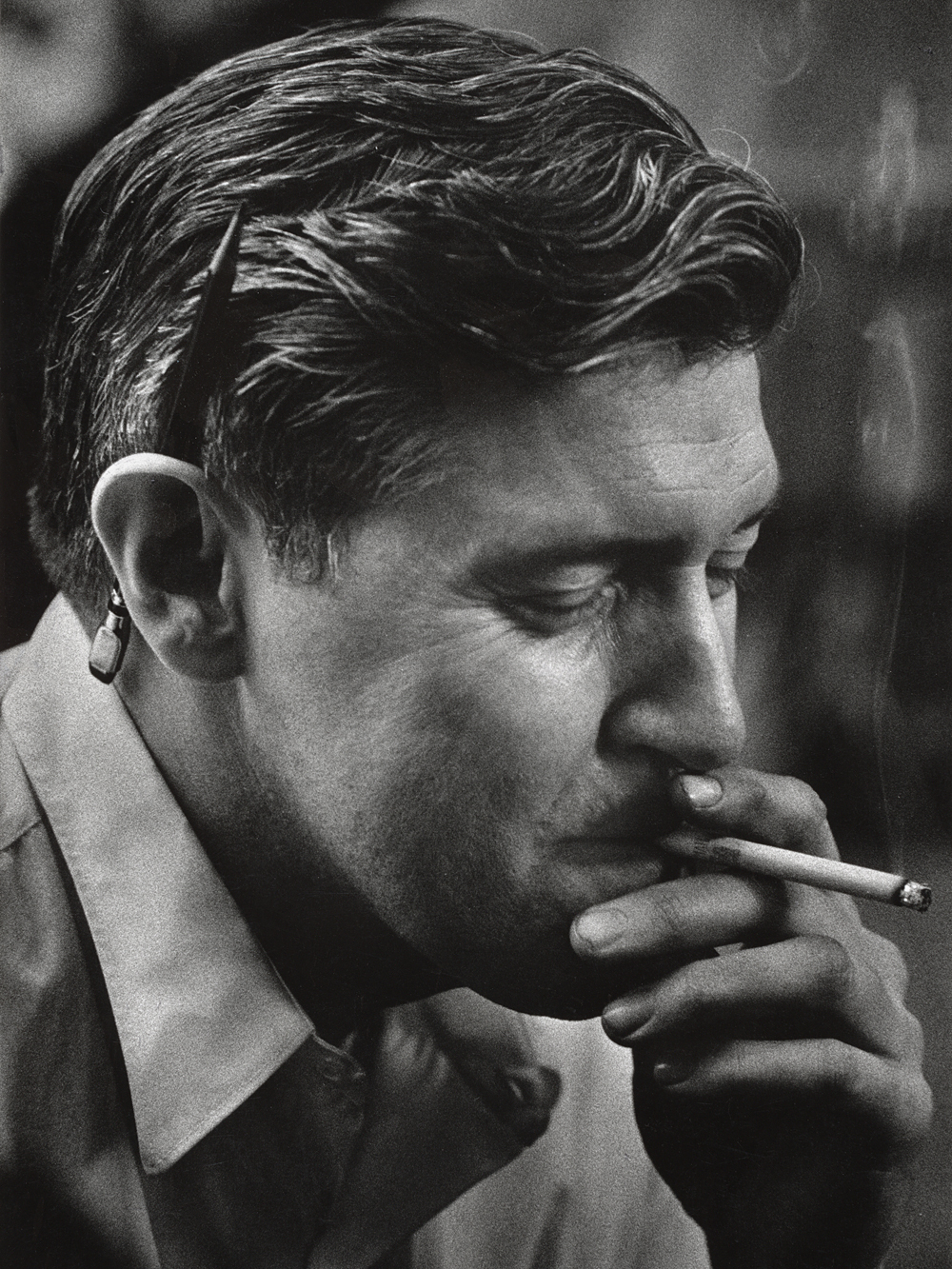 Among the thousands of hours of Jazz Loft tape discovered in the Eugene Smith archive, there is one clip in particular that produces chills.

It's a tape of pianist Thelonious Monk walking around the Loft, talking with his musical collaborator, Hall Overton. The two were at work there, arranging several Monk tunes for what was to become a historic 1959 concert at New York's Town Hall.

Overton was a tall, Midwestern, chain-smoking college professor of classical music by day. By night, he was living, teaching music and playing jazz piano at the Jazz Loft. He rented the back portion of the third floor, right next-door to photographer Eugene Smith.

Teddy Charles, a vibraphonist, spent many nights at the Jazz Loft over several years in the '50s. He and Overton were good friends.

"Many musicians started to gravitate toward that place 'cause he was the guy that had the real credentials," Charles says. "Not only a serious classical composer on the faculty at Juilliard, but [he] had taught many, many jazz musicians who used to come down there. It was like a pilgrimage to come down there and learn from Hall, study with Hall Overton, who was my early mentor."

"Jazz musicians took a shine to him because he was such a natural guy," said the late jazz pianist Dick Katz. "He acted like a jazz cat; he didn't act like a classical guy who was down with jazz — he acted like one of the fellas, which he was. And he always had a cigarette dangling from his mouth."

Composer Steve Reich went to work with Overton at the Loft in 1957. He remembers that his teacher put him to work composing right away.

The late Nancy Overton recalled that at one point, her husband's jazz lessons became all the rage.

"Doris Duke the billionairess — she decided to study with him," Nancy Overton says. "And she asked Hall to come out to one of her mansions with a chauffeur and the whole business. And Hall said, 'No, anybody who studies with me comes to my studio.' So here comes Doris in her chauffeur-driven limo onto Sixth Avenue in the Flower District, the seedy part of town, and has to sort of kick the drunks out of the door stoop going up all those grungy stairs with the graffiti. So she kept that up for a while."

"One day at the end of my lesson, there's a knock at the door," Moore says. "I put on my coat and was getting ready to go, and he opens the door, and there's Thelonious Monk with a great big, dark, long coat. Hall says, 'Oh, Thelonious, I'd like you to meet my student Carman Moore.' And he said, '[grunts].' I think he was not talking in those days.

"Off they went to the piano. I wasn't leaving at that point. So I just closed the door and leaned up against it, and watched those guys do it. They went right to work. They were preparing for the famous big band concerts at Town Hall."

Those weeks of preparation by Hall Overton and Thelonious Monk were recorded by Eugene Smith. The tapes confirm Moore's memories of how it happened.

"He had two upright pianos right next to each other," Moore says. "Hall sat down at the left-hand piano and as usual lit up a cigarette and then just left it hanging in his mouth burning and dropping all over his chest.

"Thelonious sat down at the piano on the right, and Hall just started playing, and he had his charts up there in front of him. And Thelonious started playing along with him. And Hall seemed to just understand it, that was the deal. There was no English spoken. Only music spoken here."

"[Monk] had lots of looks," Nancy Overton says. "And that's how he and Hall communicated. And a finger up, all these little nuances. Just communicated perfectly."

So Overton was an important man in the New York music scene, at the time. But you'd never have known it.

"He never bragged about himself or his stuff or forced his work on anybody or anything like that," Moore says. Dick Katz agreed: "He didn't promote himself, he didn't write books."

He was modest and he was complicated. Hall Overton dared to occupy two musical worlds — which were thought of as quite separate at the time.

"People were scratching their heads," Moore says. "What are you? Are you a jazz pianist, or are you this classical composer? At Juilliard or in the clubs? 'Man, I'm both!' "

The classical, the jazz and the work with Thelonious Monk — all of that happened in the Jazz Loft. But what also happened there is that Hall Overton played jazz piano, something few have ever heard. That evidence is preserved on Eugene Smith's tapes, too.

Overton drank a fair amount. And in the end, it wasn't the dangling cigarettes that killed him: It was the drink.

"The doctor said, 'Well you can't have alcohol anymore, and he quit like that,' " says Nancy Overton. "But it was too late."

Without Eugene Smith's Jazz Loft tapes, there would be that much less evidence of Hall Overton's role in the jazz world — or his piano playing, for that matter. Did Hall's good friend Teddy Charles know Smith's tape recorders were running?

"No," he says. "Some of us probably would have been upset, 'cause we were just going and having these really free-wheeling, swinging jam sessions. Really cookin'. Nobody's around and you're just among yourself — that's when the best jams happen. You take chances on things.

"And that was one of Hall Overton's theories about ... the real excitement of jazz is taking chances. Whether you make it or not, you try for something even if it doesn't happen. And that's what makes jazz really exciting."

Hall Overton — like more than a few others — found his free-wheeling joy on an upright piano in one particular old building in New York.