Accessibility links
Reality TV Brings Broadway New Stars, Patrons An American Idol-style contest to choose the stars of Broadway's latest Grease revival wasn't exactly a ratings smash. But hefty advance ticket sales means that the NBC series may have been a success in a different way: as a marketing gimmick. 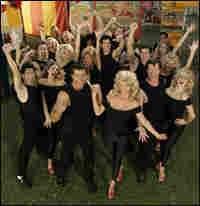 Plenty of Sandy and Danny wannabes signed up for the reality show Grease: You're the One That I Want, hoping to make their mark in the musical's latest Broadway revival, but the TV series was a ratings flop. hide caption 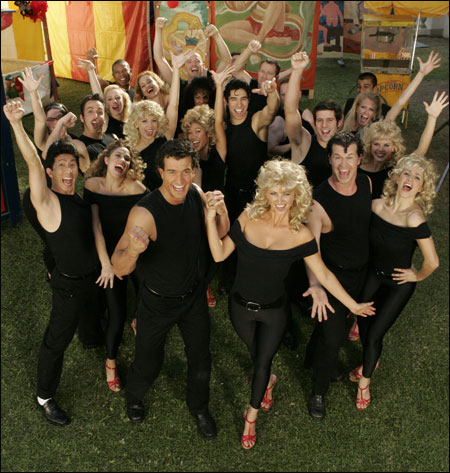 Plenty of Sandy and Danny wannabes signed up for the reality show Grease: You're the One That I Want, hoping to make their mark in the musical's latest Broadway revival, but the TV series was a ratings flop. 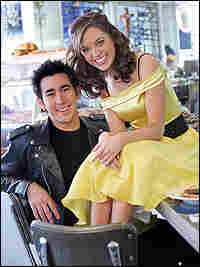 When the votes were all counted, NBC audiences had chosen Max Crumm and Laura Osnes to play the lead roles. You're the One That I Want may have been a bomb, but the $14 million box-office advance for the Broadway revival may mean it did its job as a promotional vehicle. Scott Gries hide caption 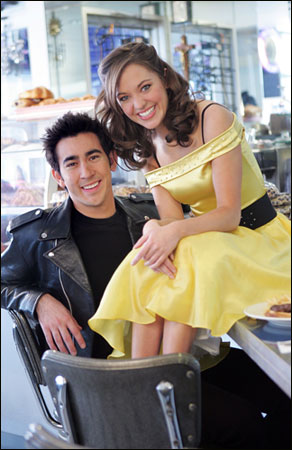 When the votes were all counted, NBC audiences had chosen Max Crumm and Laura Osnes to play the lead roles. You're the One That I Want may have been a bomb, but the $14 million box-office advance for the Broadway revival may mean it did its job as a promotional vehicle.

Hear a number from a 'Grease'

It was probably inevitable: Last winter, Broadway met reality TV in the NBC series Grease: You're The One That I Want, an American Idol-style contest whose viewers helped decide who would play the lead roles in a Broadway revival of Grease. Now that revival is almost ready to open, and Broadway is watching closely.

But for David Ian, the lead producer of the $9 million Grease revival, the NBC series was less an adventure in television programming than an experiment in casting and marketing. And it did precisely what it was designed to do.

"TV ratings and what have you ... are not really what's driving me," says Ian, who also served as a You're the One That I Want judge. "I have two goals from such a program: One, to get talent that can do the job in hand, i.e. play the role of Danny and Sandy, which I believe I've got." (Two 21-year-old unknowns, Max Crumm and Laura Osnes, were announced as the winners in March.)

"And two, truthfully, it draws huge attention to the show," Ian says. "And that means selling tickets."

Grease, in fact, is sitting on a comfortable $14 million advance sale.

"So as far as playing to a theatrical audience that might buy tickets," Ian says, You're the One That I Want "was a huge success."

So, do Broadway and reality TV go together like rama lama lama ka dinga de dinga dong? Gordon Cox, theater reporter for the trade publication Variety, says the answer may have more to do with the sound of ka-ching.

"I think people are keeping their eye on it," Cox says. "And I think the strong advance that Grease has racked up will encourage further efforts along these lines, no matter what the purists may say about how horrified they are about the popularization, or the amateurization, of Broadway."

When two-time Tony Award-winner Kathleen Marshall was approached to direct and choreograph the revival of Grease, as well as serve as a panelist on the TV show, she was intrigued.

"I thought if there ever was a show to try this kind of casting with, this is the one, because it's such a popular show," she says. "It's the most popular movie musical ever made, and it's also about young people — you'd be looking for fresh talent, no matter what."

And fresh talent is what the NBC show served up. The selection of the slightly goofy Max Crumm — in the role that John Travolta made famous — left producer David Ian "totally surprised."

"He wouldn't have been the one that I would've bet on at all," Ian says. "I think the outsider won. You know, not a conventional Danny type, if you will; great singer, great actor, great dancer/mover, but I think it's pretty fair to say that we were all surprised by the outcome."

But as part of the panel of professionals who helped carefully select the reality show's finalists, director Kathleen Marshall says she was delighted that Crumm and Osnes were the winners.

"You know, as the judges, we thought, 'We can't make people vote for somebody, but we can give them permission, we can affirm their choice,'" Marshall says. "So ... we said, 'You know what, Sandy doesn't have to be a blonde. We're not looking for an Olivia Newton-John clone here.' And so people could sort of see Laura as a real possibility for this part."

Backstage, during tech rehearsals, both Crumm and Osnes use the terms "stressful" and "surreal" often as they describe their journey from obscurity to seeing their faces plastered on posters in the subway and a huge billboard in Times Square. Crumm says that just walking on the street these days is an adventure.

"I get a lot of, like, um, young girls that come up to me a lot of the time," he says. "And moms. A lot of moms .... And if Laura and I are ever walking together in this area, it's like we're Disneyland characters."

Osnes agrees: "I'm just this little girl from Minnesota that, like, happened to audition for this," she says. "And now I'm on national TV, and I have fans and [a] screaming audience."

Ian, the Grease producer, is well aware of the star-making possibilities of melding reality TV with theater. His smash-hit revival of The Sound of Music in London found its Maria, Connie Fisher, on reality TV. And two weeks after Grease opens in New York, Ian will open a second production of the show, also cast from a reality series, in London's West End.

While the producer is pleased to be introducing two freshly minted young stars to Broadway, he hopes this production outlasts their tenure.

"This show will continue after Max and Laura leave, whenever that is," he says. "I'm not looking to have a show run just for the length of their contracts. And I hope Max and Laura are the first of many Danny and Sandys in this production."

The Broadway revival of Grease begins previews this evening and opens officially Aug. 19.