Accessibility links
Giant Lobsters From Rising Greenhouse Gases? New research shows that if carbon emissions soar, we could end up with super-sized lobsters. But you'll have to strap that bib on fast. Those same environmental conditions could spell trouble for the critters that lobsters eat — and ultimately for the jumbo crustaceans themselves. 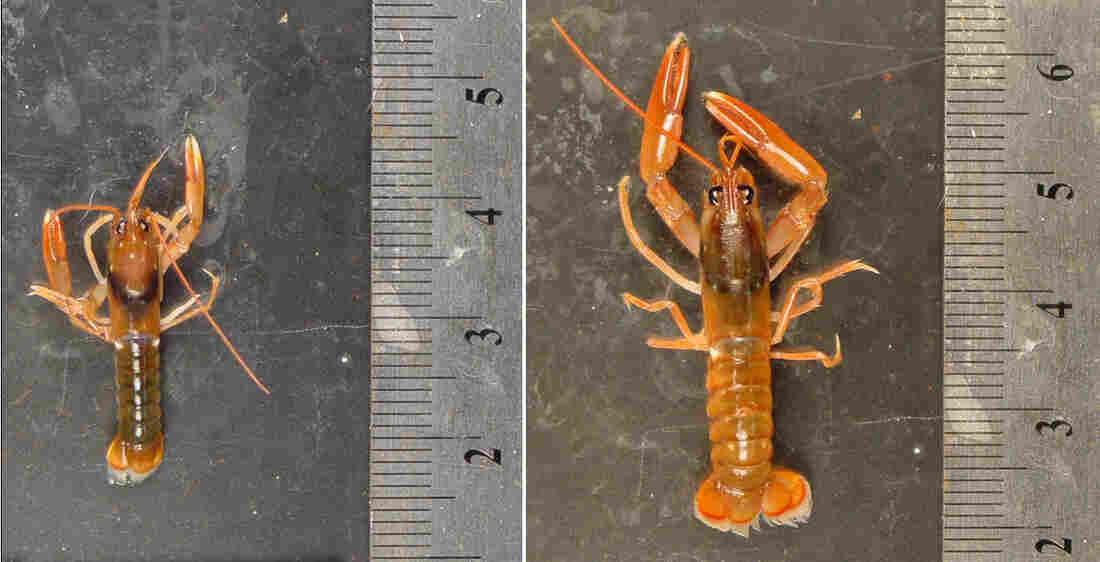 A lobster raised for 60 days at normal levels of CO2 exposure (left), and one raised at seven times that level. Courtesy Justin Ries hide caption

New research shows that if carbon emissions soar, we could end up with super-sized lobsters. But you'll have to strap that bib on fast; the jumbo lobsters probably wouldn't last for long.

A new study published in the journal Geology shows that if carbon dioxide emissions reach extreme levels, the changes in the world's oceans might result in lobsters 50 percent bigger than normal.

Lobsters can take carbon from the water and use it to build their exoskeletons, says marine geologist Justin Ries, who oversaw the study. The theory, he tells NPR's Guy Raz, is that lobsters are able to convert the extra carbon into material for building up their shells.

Ries is an assistant professor at the University of North Carolina in Chapel Hill. To conduct the study, his team built several tanks to hold marine life, and simulated high-CO2 environments at the rates predicted for 100 years from now, 200 years from now and beyond.

Lobsters, crabs and shrimp did well in the environment, according to Ries, but other things didn't — corals and other "calcifiers" like clams, scallops and oysters, for example. Unlike the lobsters, these species' shells grew thinner in the increased CO2 environments. "Actually, six of these species began to dissolve under the highest CO2 level," Ries says.

And that's why those giant lobsters might want to stay trim. Clams and other species are part of the lobster's diet. If thinner shells make them easier prey, the lobsters' food source won't last long — not good news for the predators. "Even though lobsters are building stronger shells, their populations would probably be sure to follow," Ries says.