Accessibility links
From Bauhaus, A Visionary Mix Of Art And Industry The Bauhaus was one of the most important and exciting social and artistic movements of post-World-War-I Germany. Founded by architect Walter Gropius, the movement lasted 14 years until the Nazis finally forced it to shut down. An astonishing exhibition at the Museum of Modern Art gives a thorough view of the precise but imaginative products of Bauhaus.

For many years, there was an iconic painting hanging in the lobby of the Museum of Modern Art: a picture of busy people going up and down the stairs at the Bauhaus — that noble experiment in Germany between the world wars that in many ways ushered us into the modern world. For 14 years, under its various directors, beginning with architect Walter Gropius and ending with architect Mies van der Rohe, the Bauhaus — or "House of Building" — showed us what it meant to be modern. In art, that meant a departure from realism into the realm of abstract paintings and sculpture. But it also meant a departure from bourgeois excess — having simple but comfortable furniture with clean lines, in elegant, efficient, and inexpensive surroundings. At the Bauhaus, art and industry were not necessarily enemies. Art could make eloquent use of industrial materials, and industrial materials, down to kitchen utensils and teapots, ashtrays and lighting fixtures, could be as beautiful and elegant as works of art — in fact, were works of art. Now at the Museum of Modern Art, which is itself a direct product of the Bauhaus frame of mind, Oscar Schlemmer's painting of that Bauhaus stairwell has a particular place of honor in an astonishing exhibit — Bauhaus 1919-1933: Workshops for Modernity — an exhibit that's devoted to every aspect of that great achievement.

This exhibit isn't like most art shows. It's like entering a whole world. Everywhere you turn you're struck with a dizzying array of paintings and sculptures; films and photographs; wall hangings; chairs and desks and lamps; kids' toys and architectural plans; books, pamphlets, and posters with startlingly streamlined and colorful calligraphy. Some of the major 20th-century artists participated in the Bauhaus experiment — like Paul Klee and Wasily Kandinsky — working alongside some marvelous artists few people outside of Germany are familiar with. This show has exciting examples of all of them, including the Museum of Modern Art's most famous Paul Klee, the Twittering Machine, that slyly comic mixture of nature and mechanics, and the less well-known, almost sinister hand puppets (one of them a self-portrait) that Klee designed for his children. There's the Hungarian artist Laszlo Moholy-Nagy's astonishing 1930 electric sculpture machine, a conglomeration of glass and metal and plastic and wood — sieves and graters, tracks and tubing — that's not only striking in itself but casts the must seductive and elusive shadows as it rotates. If you're familiar with the famous Breuer office chair, you'd be surprised at how many different models Breuer designed, and even more surprised by his use of plushly colorful fabric in his unique African chair, a glorious throne, both primitive and magisterial. It was long thought lost, but the curators located it and it's on view. The curators seem to have thought of everything. They had the walls in each gallery painted with original Bauhaus colors — not only the expected shades of gray and white, but also peach and lime. If you know Josef Albers Homage to the Square paintings, you may still be surprised to see him work out his color theories in brilliant little stained glass panels. These Bauhaus color experiments also connected to music: the 12 notes of the musical scale reflected in a 12-color spectrum.

"Complete mastery is impossible without precision," Kandinsky wrote in 1926. His own paintings combined exacting mathematics with a boundary-breaking, seemingly uncontrolled sense of fantasy. All the products of the Bauhaus, whether commercial or strictly idealistic, combined precision with the wildest imagination. Perhaps no place more than in New York, in the very building that houses this show, do we see how much the Bauhaus produced a vision of the very world we are now living in. And the illuminating and thoroughly detailed catalogue (it weighs five pounds) gives you a pretty substantial impression of how profoundly prescient those artists were. 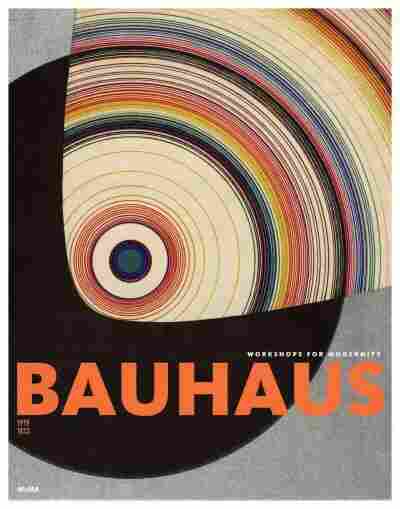 by Barry Bergdoll and Leah Dickerman