Accessibility links
Natural Gas Fights For Position In Climate Bill The industry says it has access to vast quantities of the low-carbon fuel and has funneled money into a new lobby to position itself better within proposed climate legislation. But some lawmakers aren't on board, and Exxon Mobil joining the team hasn't helped. 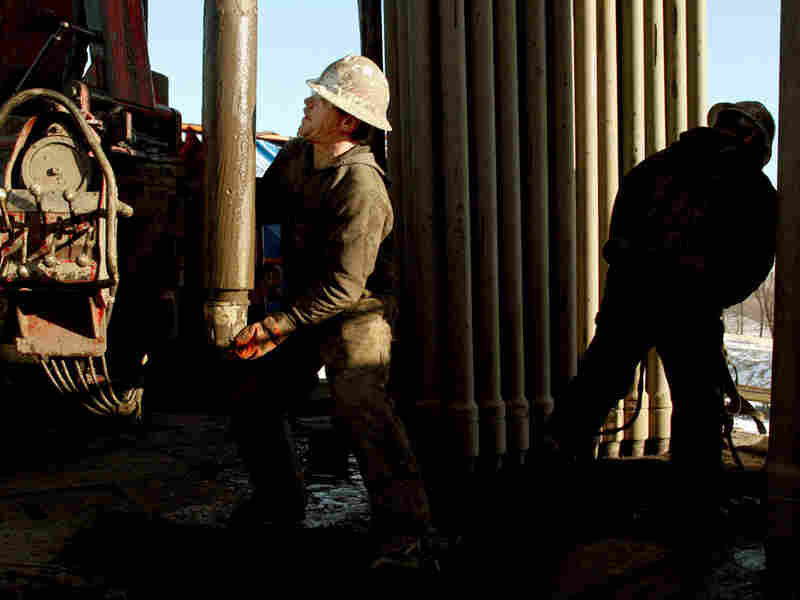 Patrick Place and Steve Jager work on a drilling rig contracted by Range Resources in Canonsburg, Pa., in 2008. Some scientists say a mostly untapped reservoir of natural gas under thousands of acres of Appalachia could swell U.S. reserves. Andrew Rush/AP hide caption 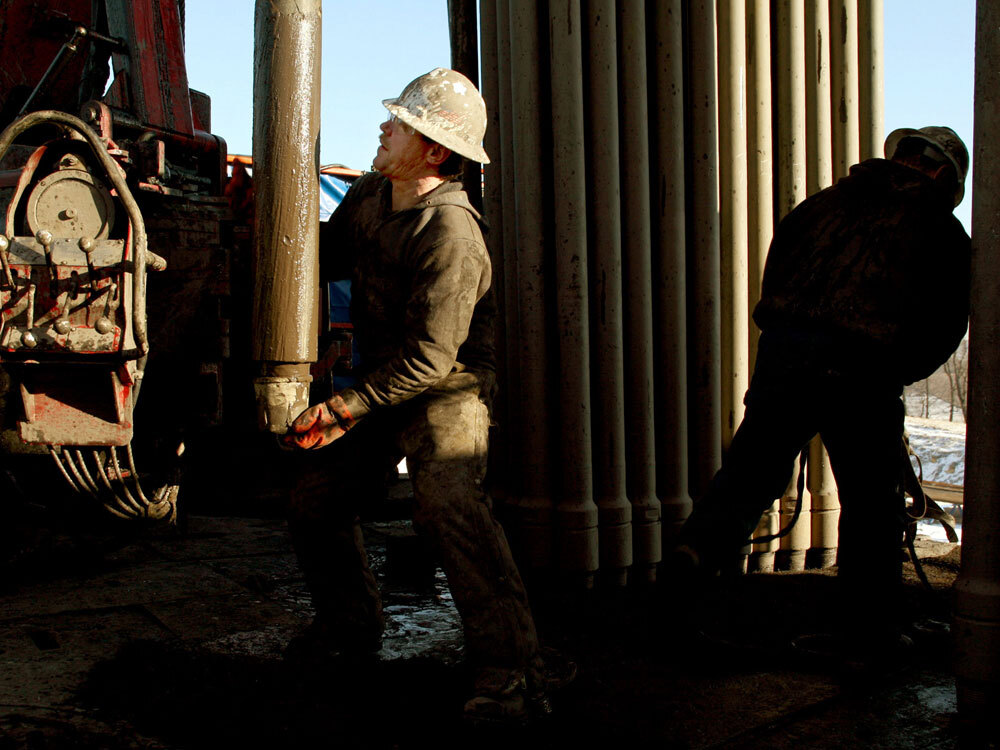 Patrick Place and Steve Jager work on a drilling rig contracted by Range Resources in Canonsburg, Pa., in 2008. Some scientists say a mostly untapped reservoir of natural gas under thousands of acres of Appalachia could swell U.S. reserves.

When Exxon Mobil announced earlier this week that it's paying $29 billion to buy XTO, the nation's No. 3 natural gas producer, it was a strong signal of just how hot the natural gas industry is right now. But that case has been hard to make on Capitol Hill.

"We think this is a great transaction for the United States and for the consumers of the U.S.," Exxon CEO Rex Tillerson told financial analysts.

Gas emits half as much carbon dioxide as coal, and with new technology to extract gas trapped in shale formations, the industry says it has a century's worth of domestic gas on tap. Advocates want Congress to promote natural gas as a "bridge" fuel to replace coal in electrical generation until clean energy sources can take over.

But when the House passed its climate change bill in June, natural gas producers couldn't get the incentives they wanted.

Andrew Littlefair, CEO of Clean Energy Fuels Corp., a natural gas provider, said the gas producers failed at the lobbying game — and then they decided to fix it.

"They just didn't have the right setup as an industry to protect themselves and promote themselves like they should," he told analysts. "And so they pulled together a war chest of something like 80 million bucks, which may be less than what coal's got at their disposal, I'm not sure, but it put them in good stead."

The $80 million went to a new group — America's Natural Gas Alliance. ANGA's mission is to make natural gas a major player on the Hill.

"Obviously, we've focused on the Senate," Chairman David Trice says, noting that the climate bill has stalled there.

But, he says, that has been good for the group because "it's really given us time to spread the word on the abundance and benefits of natural gas."

Indeed, one key bill in the Senate would reward power companies if they switch out their dirtiest coal plants for natural gas.

For instance, Republican Sen. Christopher Bond of Missouri says natural gas prices will escalate. At a hearing, he asked Barry Hart of the Association of Missouri Electric Cooperatives what would happen if power generators in his state were forced to switch from coal to natural gas.

"What would that do to power rates in Missouri?" he said. "It's the worst-case scenario. If we switch to natural gas, you're looking at, by 2012, [a] 46 percent" increase in heating bills.

Other lawmakers worry that drilling will contaminate drinking water and are considering new federal environmental standards.

It's a big issue in Pennsylvania and New York, where protesters disrupted a regulatory hearing a few weeks ago.

"You know, it kind of reminds me of the health care debate — the screaming and shouting and YouTubes over death panels," Trice says.

But oddly, Exxon Mobil, the newest player in shale gas, is effectively locked out of this lobbying effort because the company has spent millions upon millions of dollars fighting Congress' approach to climate change.

"Why would any senator who wanted clean energy legislation listen to Exxon Mobil, who comes to their office and says, 'Put in this provision that I like, and by the way, I'm going to oppose the rest of your bill'?" he says.

So natural gas producers are left with this paradox: Exxon Mobil ranks as one of the most powerful lobby forces in Washington, and now it can be their ally — except on this bill, when it isn't.