Accessibility links
Excerpt: 'Too Much Happiness' Alice Munro's latest book of short stories is peopled with flawed human beings in compromising, even desperate situations. In all the stories, people who seem to be living ordinary lives do unexpected, sometimes disturbing things.

Excerpt: 'Too Much Happiness'

Excerpt: 'Too Much Happiness' 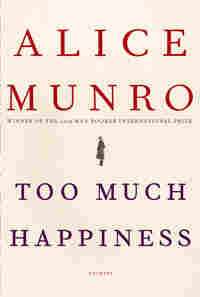 Many persons who have not studied mathematics confuse it
with arithmetic and consider it a dry and arid science.
Actually, however, this science requires great fantasy.
--Sophia Kovalevsky

On the first day of January, in the year 1891, a small woman and a large man are walking in the Old Cemetery, in Genoa. Both of them are around forty years old. The woman has a childishly large head, with a thicket of dark curls, and her expression is eager, faintly pleading. Her face has begun to look worn. The man is immense. He weighs 285 pounds, distributed over a large frame, and being Russian, he is often referred to as a bear, also as a Cossack. At present he is crouching over tombstones and writing in his notebook, collecting inscriptions and puzzling over abbreviations not immediately clear to him, though he speaks Russian, French, English, Italian and has an understanding of classical and medieval Latin. His knowledge is as expansive as his physique, and though his specialty is governmental law, he is capable of lecturing on the growth of contemporary political institutions in America, the peculiarities of society in Russia and the West, and the laws and practices of ancient empires. But he is not a pedant. He is witty and popular, at ease on various levels, and able to live a most comfortable life, due to his properties near Kharkov. He has, however, been forbidden to hold an academic post in Russia, because of being a Liberal.

The woman with him is also a Kovalevsky. She was married to a distant cousin of his, but is now a widow.

She speaks to him teasingly.

Only half listening, he asks her, Why is that?

"Because we have gone walking in a graveyard on the first day of the New Year."

"There are still a few things you don't know," she says in her pert but anxious way. "I knew that before I was eight years old."

"Girls spend more time with kitchen maids and boys in the stables--I suppose that is why."

"Boys in the stables do not hear about death?"

"Not so much. Concentration is on other things."

There is snow that day but it is soft. They leave melted, black footprints where they've walked.

She met him for the first time in 1888. He had come to Stockholm to advise on the foundation of a school of social sciences. Their shared nationality, going so far as a shared family name, would have thrown them together even if there was no particular attraction. She would have had a responsibility to entertain and generally take care of a fellow Liberal, unwelcome at home.

But that turned out to be no duty at all. They flew at each other as if they had indeed been long-lost relatives. A torrent of jokes and questions followed, an immediate understanding, a rich gabble of Russian, as if the languages of Western Europe had been flimsy formal cages in which they had been too long confined, or paltry substitutes for true human speech. Their behavior, as well, soon overflowed the proprieties of Stockholm.

He stayed late at her apartment. She went alone to lunch with him at his hotel. When he hurt his leg in a mishap on the ice, she helped him with the soaking and dressing and, what was more, she told people about it. She was so sure of herself then, and especially sure of him. She wrote a description of him to a friend, borrowing from De Musset.

He is very joyful, and at the same time very gloomy--

Extremely light-minded, and yet very affected--

Terribly sincere, and at the same time very sly.

And at the end she wrote, "A real Russian, he is, into the bargain."

Fat Maksim, she called him then.

"I have never been so tempted to write romances, as when with Fat Maksim."

And "He takes up too much room, on the divan and in one's mind. It is simply impossible for me, in his presence, to think of anything but him."

This was at the very time when she should have been working day and night, preparing her submission for the Bordin Prize. "I am neglecting not only my Functions but my Elliptic Integrals and my Rigid Body," she joked to her fellow mathematician, Mittag-Leffler, who persuaded Maksim that it was time to go and deliver lectures in Uppsala for a while. She tore herself from thoughts of him, from daydreams, back to the movement of rigid bodies and the solution of the so-called mermaid problem by the use of theta functions with two independent variables. She worked desperately but happily, because he was still in the back of her mind. When he returned she was worn out but triumphant. Two triumphs--her paper ready for its last polishing and anonymous submission; her lover growling but cheerful, eagerly returned from his banishment and giving every indication, as she thought, that he intended to make her the woman of his life.

The Bordin Prize was what spoiled them. So Sophia believed. She herself was taken in by it at first, dazzled by all the chandeliers and champagne. The compliments quite dizzying, the marvelling and the hand kissing spread thick on top of certain inconvenient but immutable facts. The fact that they would never grant her a job worthy of her gift, that she would be lucky indeed to find herself teaching in a provincial girls' high school. While she was basking Maksim decamped. Never a word about the real reason, of course--just the papers he had to write, his need for the peace and quiet of Beaulieu.

He had felt himself ignored. A man who was not used to being ignored, who had probably never been in any salon, at any reception, since he was a grown man, where that had been the case. And it wasn't so much the case in Paris either. It wasn't that he was invisible there, in Sonya's limelight, as that he was the usual. A man of solid worth and negotiable reputation, with a certain bulk of frame and intellect, together with a lightness of wit, an adroit masculine charm. While she was an utter novelty, a delightful freak, the woman of mathematical gifts and female timidity, quite charming, yet with a mind most unconventionally furnished, under her curls.

He wrote his cold and sulky apologies from Beaulieu, refusing her offer to visit once her flurry was over. He had a lady staying with him, he said, whom he could not possibly present to her. This lady was in distress and needed his attention at the moment. Sonya should make her way back to Sweden, he said; she should be happy where her friends were waiting for her. Her students would have need of her and so would her little daughter. (A jab there, a suggestion familiar to her, of faulty motherhood?)

And at the end of his letter one terrible sentence.

"If I loved you I would have written differently."

The end of everything. Back from Paris with her prize and her freaky glittery fame, back to her friends who suddenly meant no more than a snap of her fingers to her. Back to the students who meant something more, but only when she stood before them transformed into her mathematical self, which was oddly still accessible. And back to her supposedly neglected but devastatingly merry little Fufu.

Everything in Stockholm reminded her.

She sat in the same room, with the furniture brought at such foolish expense across the Baltic Sea. The same divan in front of her that had recently, gallantly, supported his bulk. And hers in addition when he skillfully gathered her into his arms. In spite of his size he was never clumsy in lovemaking.

This same red damask, on which distinguished and undistinguished guests had sat in her old lost home. Maybe Fyodor Dostoyevsky had sat there in his lamentable nervous state, dazzled by Sophia's sister Aniuta. And certainly Sophia herself as her mother's unsatisfactory child, displeasing as usual.

The same old cabinet brought also from her home at Pali-bino, with the portraits of her grandparents set into it, painted on porcelain. The Shubert grandparents. No comfort there. He in uniform, she in a ball gown, displaying absurd self-satisfaction. They had got what they wanted, Sophia supposed, and had only contempt for those not so conniving or so lucky.

"Did you know I'm part German?" she had said to Maksim.

"Of course. How else could you be such a prodigy of industry? And have your head filled with mythical numbers?"

If I loved you.

Fufu brought her jam on a plate, asked her to play a child's card game.

Later she wiped the tears out of her eyes and begged the child's pardon.

Excerpted from Too Much Happiness by Alice Munro. Copyright 2009 Alice Munro. Published with permission by Knopf. All rights reserved. 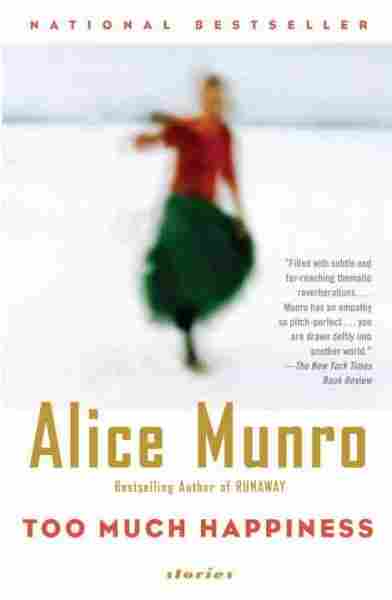