Accessibility links
Climate Change Poses Threat To Colombian Coast Climate scientists say Colombia's glaciers could disappear within 15 years. Wet highland areas that provide much of the country's fresh water are getting warmer and drier. And each year, flooding becomes more severe. The coastal area of Tumaco has become an example of how environmental and security pressures are undermining previously stable communities. 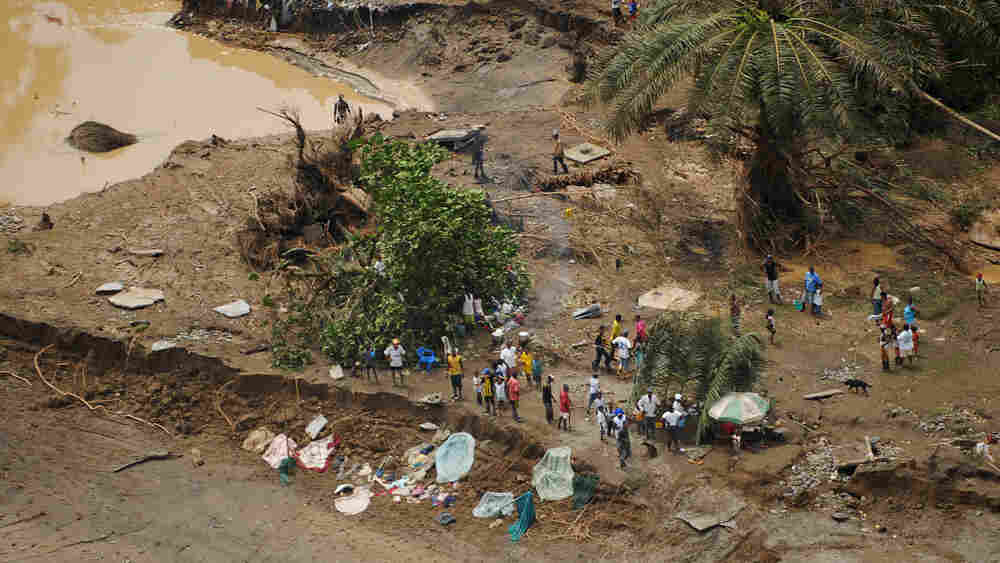 Flooding of the Mira and Telembi rivers in the Narino province of Colombia left approximately 30,000 people homeless and destroyed 62 villages in February 2009. Displaced families have been forced to take refuge in the crowded and crime-infested city of Tumaco. Miguel Solano/AFP/Getty Images hide caption 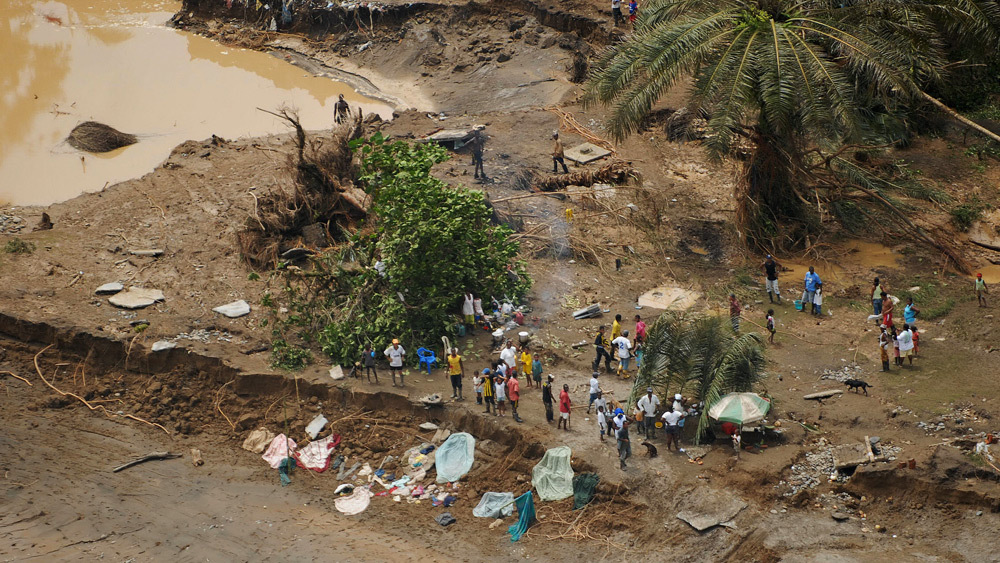 Flooding of the Mira and Telembi rivers in the Narino province of Colombia left approximately 30,000 people homeless and destroyed 62 villages in February 2009. Displaced families have been forced to take refuge in the crowded and crime-infested city of Tumaco.

For more than 300 years, residents of Colombia's Pacific Coast area of Tumaco have mostly been left alone to fish or grow bananas, cacao or other crops, often cultivating communal plots. Their part of southwestern Colombia is isolated from the rest of the country, and the largely Afro-Colombian population lived peacefully in relative autonomy.

But in recent years, the peace has been disturbed by new security threats, aggravated by climate change. The Tumaco area, in Colombia's Narino province, has become a prime example of how environmental and security pressures work in tandem to undermine previously stable communities.

The problems in Tumaco, a municipality roughly the size of Rhode Island, began with the arrival about 10 years ago of violent drug trafficking groups that had been dislodged from their strongholds in the central part of the country. Colombian military forces soon moved in to challenge the armed groups and fumigate their coca crops, without much consideration for the effect such efforts had on the local population.

This year, the people of Tumaco and the surrounding lowlands (population 160,000) were hit by a devastating flood, wiping out 62 villages and leaving about 30,000 people homeless. Worse, Colombian authorities predict that climate change is likely to provoke more "extreme weather events" in the future, raising the prospect of new social crises.

"We're hit from all sides," says Roberto Solorzano, a community leader in the village of El Guabo, on the banks of the Mira River, which overflowed last February. "We had the fumigation, the government and then the flood. We've been beat up by the environment itself."

Solorzano and his family, like most of their neighbors, were left homeless by the February flood and are now living in a tiny shack built from salvaged flood debris.

Of all the Western Hemisphere countries, Colombia is uniquely vulnerable to climate change. The country faces the prospect of environmental stress on multiple fronts: coastlines on both the Caribbean Sea and the Pacific Ocean, Andean mountains, an Amazon rain forest, fertile plains and numerous river basins.

Climate scientists say the country's glaciers could disappear within 15 years. Wet highland areas that provide much of the country's fresh water are getting warmer and drier. And each year, flooding becomes more severe.

The climate and security dynamic in Colombia is reflected in the large-scale displacement of many villagers in the Tumaco municipality, a fertile tropical area of banana, cacao and palm groves with numerous mangrove swamps. Drug groups and affiliated guerrilla forces have intimidated tens of thousands of people in the countryside.

"People here found themselves surrounded by armed gangs," says Luis Alberto Gutierrez, president of an association of Afro-Colombian "community councils" in the rural Tumaco area. "They knew the groups were processing illegal drugs, but what could they do? Either they went along, or they were pushed out — or killed."

Many of the rural residents took refuge in the port city of Tumaco, which became an overcrowded and crime-infested city. 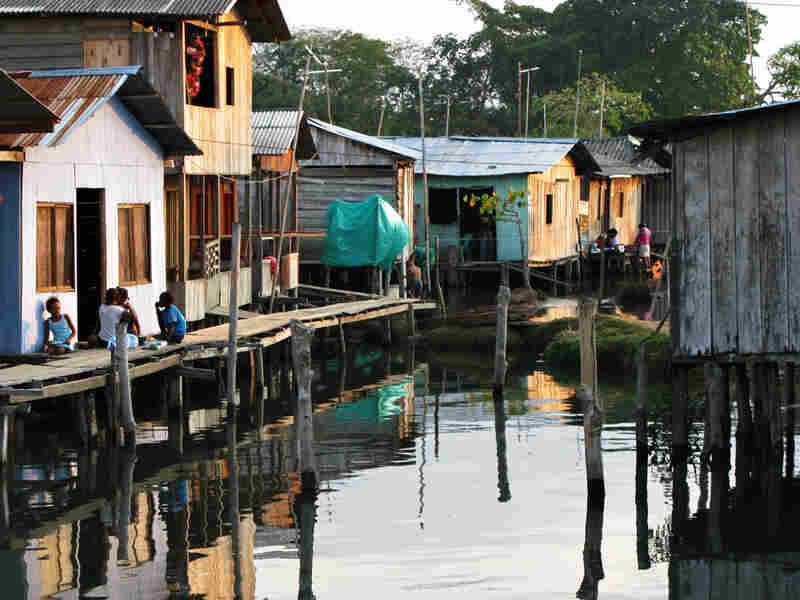 About 80 percent of Tumaco's people live on or alongside the water, where they are highly vulnerable to any changes in the climate or water levels. The flooding in recent years has caught many of the locals by surprise. Tom Gjelten/NPR hide caption 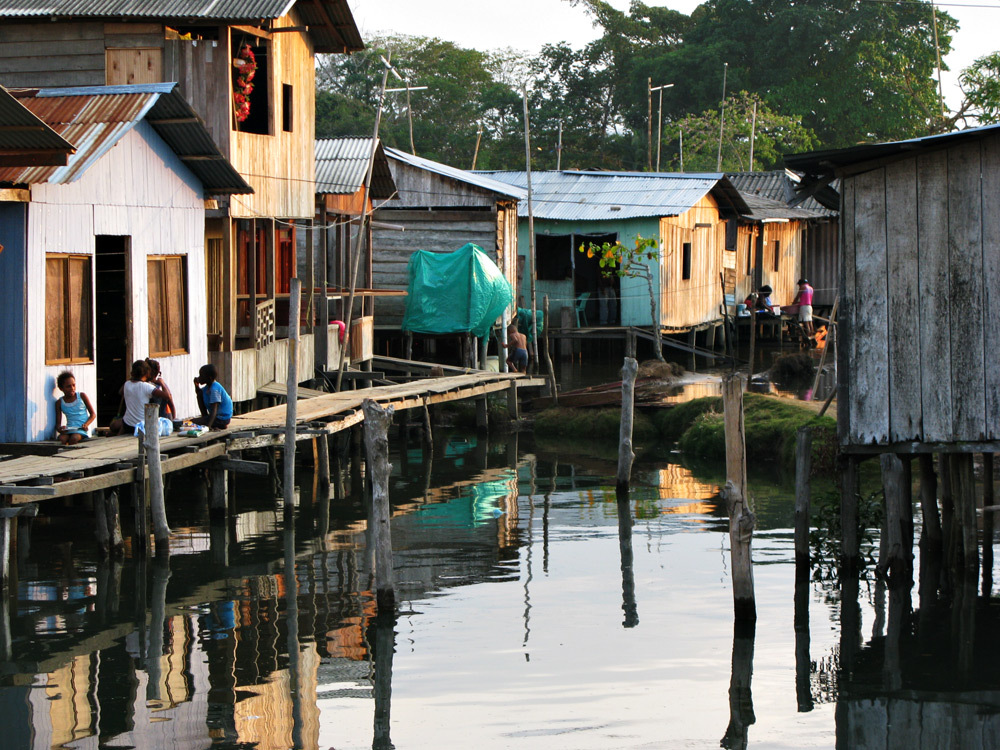 About 80 percent of Tumaco's people live on or alongside the water, where they are highly vulnerable to any changes in the climate or water levels. The flooding in recent years has caught many of the locals by surprise.

"Tumaco is probably the most difficult bit we have of the country," says Sergio Jaramillo, Colombia's vice minister of defense. "By Colombian standards, you're talking about one of the poorest parts of the country. And you suddenly get massive amounts of drug and cocaine being moved through there, and it is an explosive cocktail, not easy to control."

The social pressures only increased after the Mira River flooded, destroying the livelihoods of many people who had managed to avoid the pressures of the armed drug trafficking groups.

"I lost my chickens. I lost my horse. I lost my pig," says Einer Tobsa, 25, who farmed a small plot in El Guabo. "I lost everything I had planted. The river took it all away."

Of 50 houses in El Guabo before the February flood, only a dozen are still standing. The wall of water that swept over their village was so sudden and devastating that villagers refer to it as an "avalanche" rather than a flood. For villagers who had spent their entire lives alongside the Mira and accustomed themselves to normal seasonal flooding, the events of Feb. 16 were life-changing.

"Never, ever had there been anything like this," says Maria Lourdes Castillo, 74, who lost the house in El Guabo she had shared with her husband and three grandchildren.

The village is accessible only by water and owes its 100-year existence to the Mira. El Guabo residents wash their dishes and clothes in the river, and it has always irrigated their crops. But the unprecedented February flood disoriented the villagers, leaving them uncertain of their own future.

"I'll never rebuild there," says Castillo, who has relocated to higher ground. "I'm too afraid. I worry it will happen again." 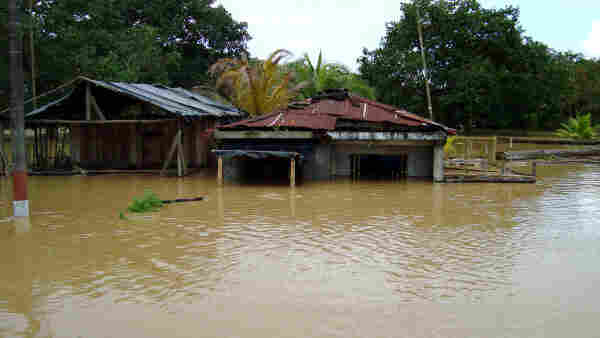 An image from the flooding that destroyed villages near Tumaco in February. Courtesy International Organization for Migration Pasto Office hide caption 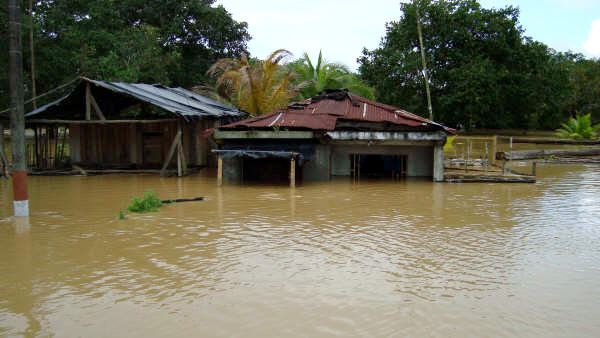 An image from the flooding that destroyed villages near Tumaco in February.

Colombian authorities worry that people in El Guabo and other villages in the Tumaco area will become weary of the environmental problems and simply surrender to the drug trafficking groups that already surround them.

That scenario was highlighted in a recent report on climate and security issues in Colombia by the Center for Naval Analyses, a military-oriented research institute in Alexandria, Va.

"Displaced populations are extremely vulnerable to exploitation by criminal groups, including for recruitment into criminal and illegally armed organizations," the authors wrote.

While climate change itself is unlikely to lead to entirely new security problems, the report concluded, it can serve as a "threat multiplier," exacerbating existing security issues.

The cause-and-effect relationship between climate and security is extremely complex, however. Some Colombian officials argue that while environmental developments can aggravate security problems, the same dynamic can work in reverse. The demand for coca, for example, has led trafficking groups to clear forested areas in Colombia, thus setting the stage for erosion that makes flooding more likely and severe.

"We are surprised that, on the one hand, climate change is being taken so seriously," says Jaramillo, the vice minister of defense. "But on the other hand, people are so slow to make the link between drug consumption and the environment."