Accessibility links
FDA Investigates Radiation Overdose At Hospitals The Food and Drug Administration is investigating more than 300 cases of radiation overdoses from a special type of CT brain scan. The news comes at the same time as a recent study suggesting that some types of CT scans at normal radiation levels may elevate the risk of cancer over the long term. 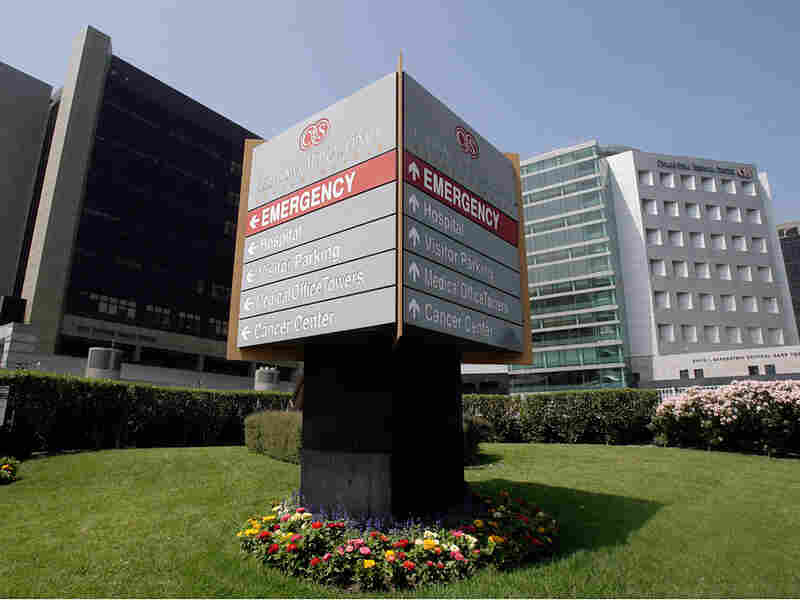 Cedars-Sinai Medical Center in Los Angeles is one of four hospitals named by the FDA as having exposed patients to overdoses of radiation during CT scans. Hundreds of patients have been exposed to three to eight times the normal amount of radiation through these scans. Ric Francis/AP hide caption 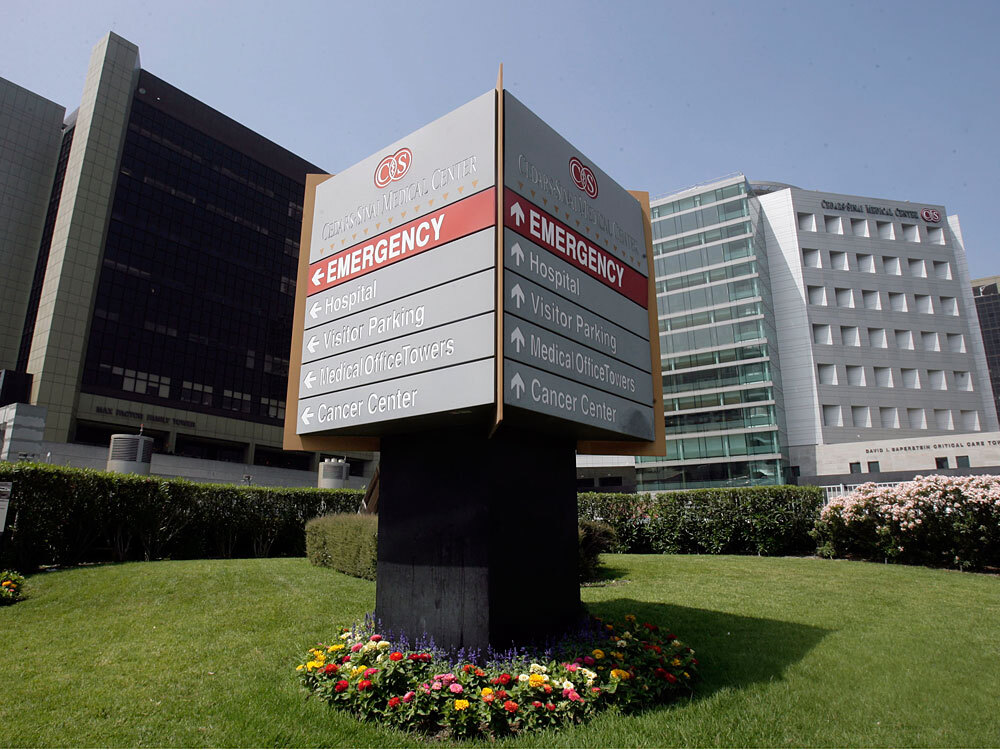 Cedars-Sinai Medical Center in Los Angeles is one of four hospitals named by the FDA as having exposed patients to overdoses of radiation during CT scans. Hundreds of patients have been exposed to three to eight times the normal amount of radiation through these scans.

More than 300 patients may have received an overdose of radiation from a special type of CT scan used to image the brain.

The Food and Drug Administration says the radiation overdoses occurred at three hospitals in Los Angeles County and one hospital in Huntsville, Ala. FDA officials say there could be many more cases at hospitals nationwide as their investigation unfolds.

The scan in question is called a perfusion CT. After an injection, a brain scan is taken to examine blood vessels. Perfusion CT is typically done to diagnose a stroke or aneurysm.

These scans require more radiation than a typical CT scan. A regular CT scan to the brain is the equivalent of about 100 chest X-rays, says Dr. Jeffrey Shuren, acting director of the FDA's Center for Devices and Radiological Health. By contrast, a perfusion CT scan of the brain is equal to several hundred chest x-rays.

Patients at the four hospitals who received excess radiation were exposed to the equivalent of several thousand X-rays instead — three to eight times the expected radiation dose.

The FDA has sent alerts to hospitals and health care facilities nationwide that perform these specialized CT scans, asking them to double-check the machines in order to assure that they are configured correctly, he says.

The companies that make the scanners involved, GE Healthcare and Toshiba, say they're cooperating with the FDA and hope to resolve the situation quickly. The hospitals say the same thing. For the patients, though, the experience has been life-changing.

In Los Angeles, Trevor Rees, 64, had two of these perfusion scans after suffering what was later diagnosed as a stroke. He said his hair fell out while he was washing it.

"I had flaky skin. My face was red," he says. Even so, people kept telling Rees how "good" he looked, as if he'd been on vacation. Hardly, says Rees, telling friends that he had been in the hospital.

About 10 days after he came home from the hospital, Rees says, the nausea set in. One year later, he says, it's still nonstop. He says his wife tries to "force-feed" him, but it just doesn't work.

Rees says he's better off simply eating what he calls comfort food — mashed potatoes or a bowl of macaroni and cheese. Anything else, he says, he just can't have. Even the smell of coffee or tea, beverages he previously enjoyed, can't be tolerated anymore.

Rees lost 20 pounds fairly quickly, though he wasn't overweight to begin with. Today, he's quite thin and walks with a cane. He's easily fatigued and often dizzy.

He's suing the hospital where he had the scan. His lawyer, Bill Newkirk, says he has several clients with the same story.

"That amount of radiation produces tissue destruction," says Newkirk, adding, "We found that consistently among all of the people who have contacted my office, and there's a large number of them, all have characteristic symptomatology that is consistent" with problems suffered by Rees.

So far, reports of radiation overdose have only been reported with these special scans that look at blood vessels. But some health experts say all scans — perfusion and regular — add up to too much and increase the risk of cancer.

In a study published Tuesday in the Archives of Internal Medicine, Dr. Rebecca Smith-Bindman of the University of California, San Francisco found major variations in the amount of radiation used for all types of CT scans and estimated cancer risk from the scans. She says 1 in every 250 patients who undergo CT scans of the abdomen or pelvis will likely get cancer as a result of the radiation from the scan. Clearly, according to the study, patients who receive higher radiation doses are at greater cancer risk.

Smith-Bindman says standards for radiation dose should be universal and tightly regulated. She says CT scans can be just as effective with much lower doses of radiation than the current dosage used today.