Accessibility links
Vegas Gambles On $8.5 Billion Luxury Project CityCenter, a complex of hotels, condos, a shopping mall and casino, is said to be the most expensive privately funded project in U.S. history. It's launching during difficult times, and it's got no official theme to attract tourists like other Vegas hotels. Its unofficial theme? Urbanism, architecture and art. 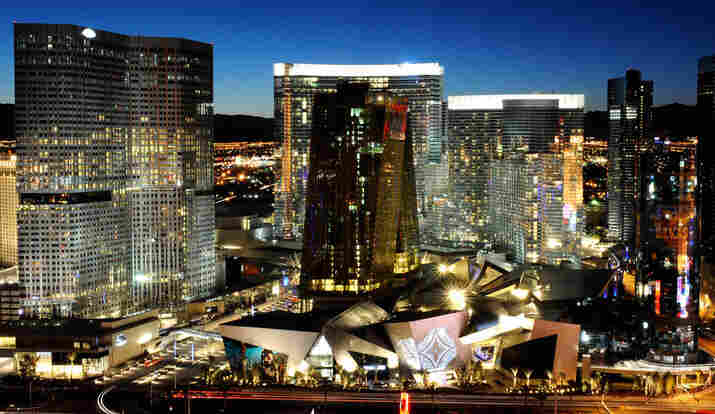 Billed as a city within a city, the $8.5 billion CityCenter opens on Wednesday in Las Vegas. CityCenter is a complex containing a resort and casino, hotels, condos and a shopping mall — all designed by some of the most well-known names in architecture: Rafael Vinoly, Daniel Libeskind, Norman Foster, Helmut Jahn and Cesar Pelli.

It's one of the largest projects to date built to LEED standards for sustainable construction. And it features public art by artists such as Maya Lin, Frank Stella and Henry Moore. CityCenter is said to be the most expensive privately funded project in U.S. history.

Its 67-acre footprint is unmatched in size in Las Vegas. And with 19 million square feet, it has twice the space — though not the height — of the two World Trade Center towers.

It took five years and 9,000 construction workers to build CityCenter, and roughly 12,000 employees have been hired to run the place. Now, the question is whether enough visitors will come and spend enough money to make the property profitable.

CityCenter is opening during difficult economic times. Las Vegas hotel prices are already being heavily discounted, and CityCenter is no exception, even though it's the new place to stay. Competitors fear that the 6,000 new rooms will cause a damaging price war.

Condo sales have also slowed, even after being discounted by 30 percent. Because of the drop in real estate values, the project is now valued at $5 billion, much less than its $8.5-billion construction price. One hotel in the complex, Vdara, has opened only 26 of its 57 floors. Another, the Harmon, was lopped to half its height because of structural problems. Harmon is not scheduled to open until the end of 2010.

CityCenter is a joint venture between MGM Mirage and Dubai World, the financially troubled commercial investment arm of the Dubai government. The project has been spun off from the rest of Dubai World, and Wall Street analysts say it's unlikely that CityCenter will suffer from Dubai World's problems. In fact, they say it's more likely that MGM Mirage would buy out Dubai World — at a discounted price.

CityCenter is unlike other resorts on the Las Vegas Strip, because of its size and its lack of an official theme; there are no Egyptian pyramids, faux Eiffel Towers or Venetian canals. Its unofficial theme is urbanism, architecture and art.

"If you build it, they will come," is a famous line from the movie Field of Dreams. In CityCenter's case, that's not guaranteed. And this is no cornfield in Iowa.