Accessibility links
Deli Uses Dow's Surge To Draw Business At Cucina Deli in Salt Lake City, sales dropped off sharply during the recession. The deli owner had to cut costs, but he also came up with an imaginative promotion to increase revenue — offer free coffee every Monday until the Dow broke the 10,000 mark. 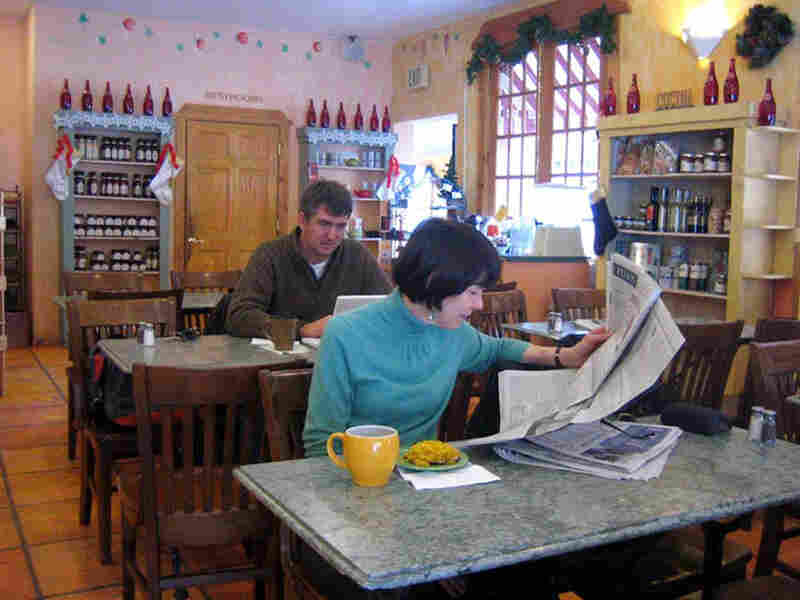 Customers Linda Price and Sam Wheatley stop for coffee and a bite to eat at the Cucina Deli in Salt Lake City. Jenny Brundin for NPR hide caption 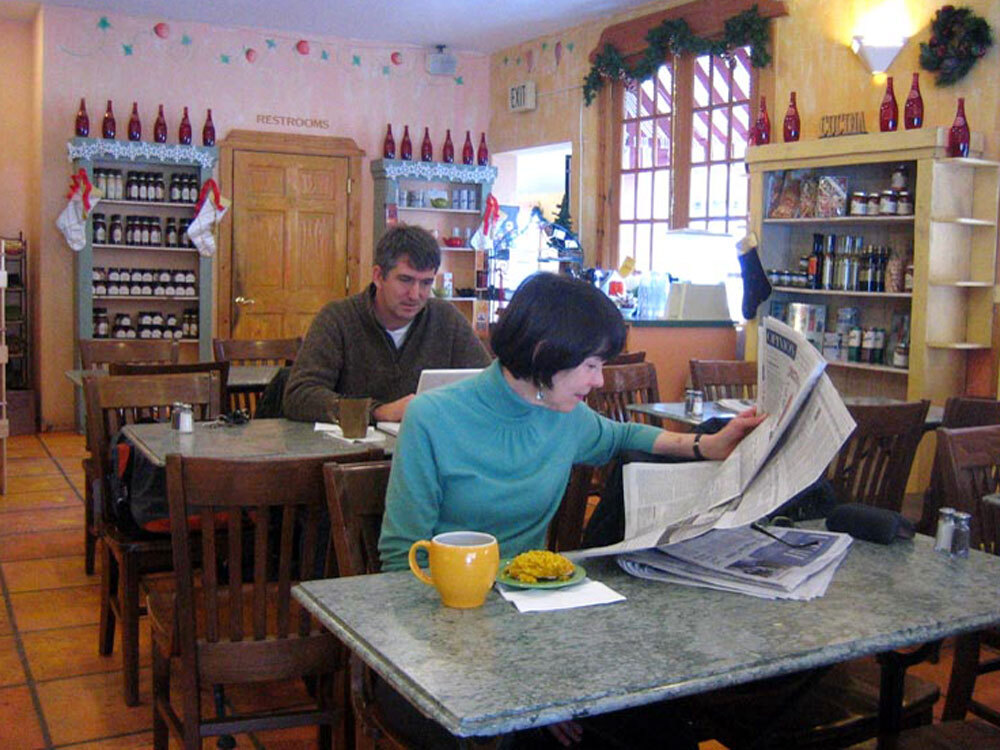 Customers Linda Price and Sam Wheatley stop for coffee and a bite to eat at the Cucina Deli in Salt Lake City.

"I had the hell scared out of me," recalls owner Dean Pierose. He had to find a way to cut costs, but he also wanted to keep customers coming back.

Pierose never liked gimmicks or promotions. But the recession was taking a toll on business. So, he came up with an idea for the deli's own stimulus package — free coffee on Mondays. But that wasn't enough: He wanted to associate the promotion with something. So, he turned to the Dow Jones industrial average. He decided he would offer free coffee on Mondays until the Dow hit 10,000.

Pierose painted the wall with a big graph to track the Dow, with a thick red line designating the 10,000 mark.

"It was a circus on Mondays," he recalls. He and his chef, Penny Murphy, also added a green theme to the promotion — customers had to bring in their own cups to receive the free coffee.

Pierose estimates that they served 22,000 free cups of coffee as part of the promotion, which lasted until October, when the Dow broke that mark. And, as was the hope, during the promotion people often paid for something to eat with the coffee.

"Everyone had a hard time at first, but we tried to do it in an even way — maybe everyone took back about five hours a person," Walquist says.

To save even more money, Murphy scrutinized food purchases.

"I order usually 60 pounds of salmon," Murphy says. "I can see that the salmon isn't turning over, so you go back to 30 pounds, just keeping an eye on what's selling, what's not selling."

Some customers weren't touching the bread on the side of the plate, so servers now ask whether a customer wants it before serving it.

An Increase In Profits And Efficiency

On a recent morning at the deli, business is brisk behind the counter. Servers deftly prepare curry chicken salads and red-peppered spicy ham sandwiches. Catering orders pile up.

"I took out the first one at 6:45 this morning, and it hasn't stopped," Pierose laughs.

Even though sales at the deli are still down by about 8 percent, profits have increased. The 30 part-time employees have become busier, and no one has quit to find another job. Zero turnover is almost unheard of in the restaurant business. 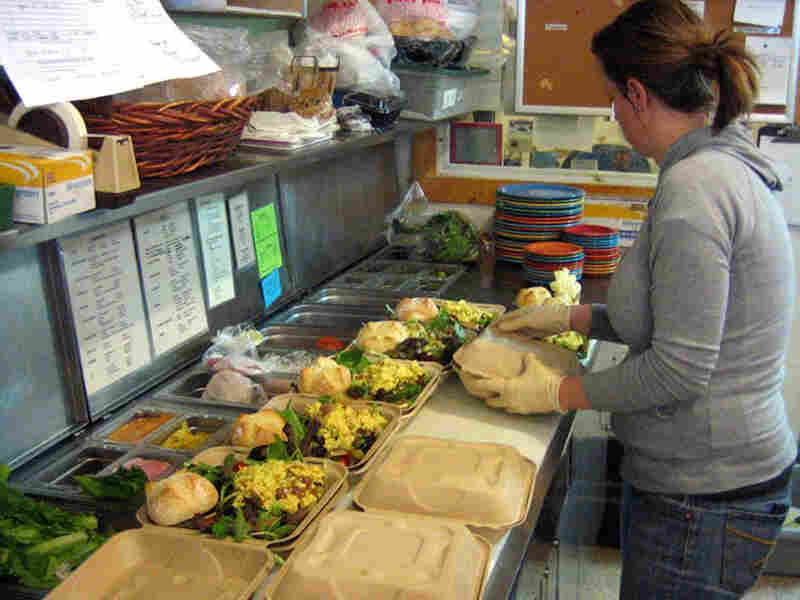 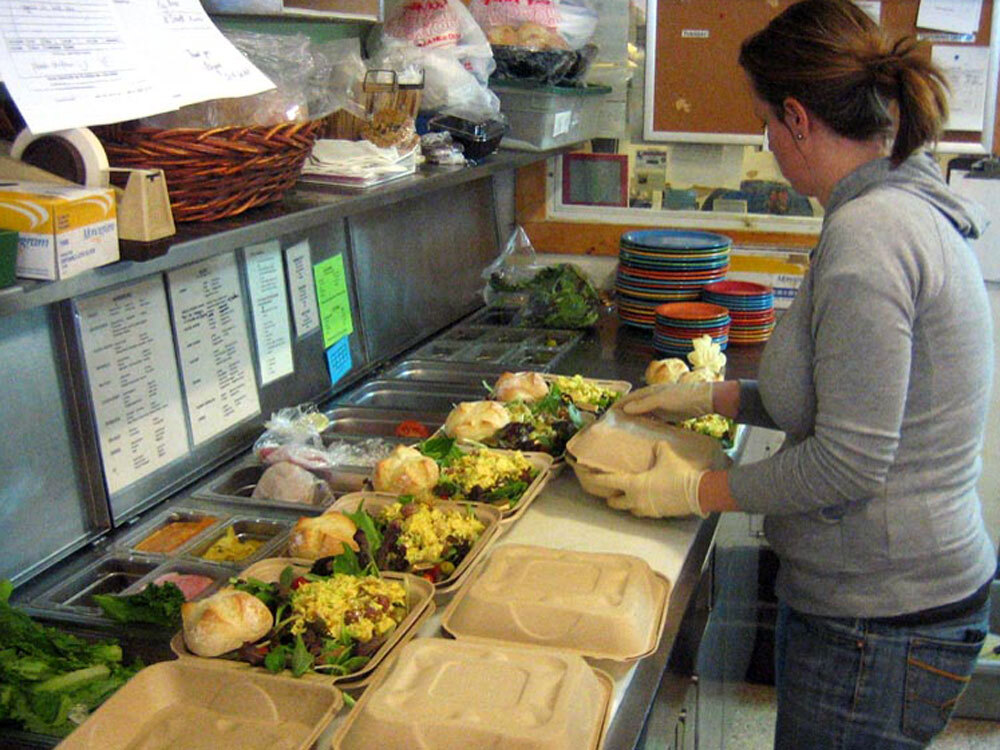 Pierose says the recession has made him more efficient.

He is also open to business advice from regular customers like Robert Brussard, who has made Cucina Deli his second home.

"Every time [the Dow] goes back below 10,000, you ought to bring back the free coffee," Brussard suggests to Pierose.

But with the Dow now well over 10,000, Pierose hopes more customers will be able to pay for their own coffee.