Accessibility links
Laid-Off Furniture Workers Try To Leap To Google Two million manufacturing jobs have disappeared in the recession. Lenoir, N.C., was once known as the "Furniture Capitol of the South." But a handful of former furniture factory workers are trying to retrain for high-tech careers with the new company in town: Google. 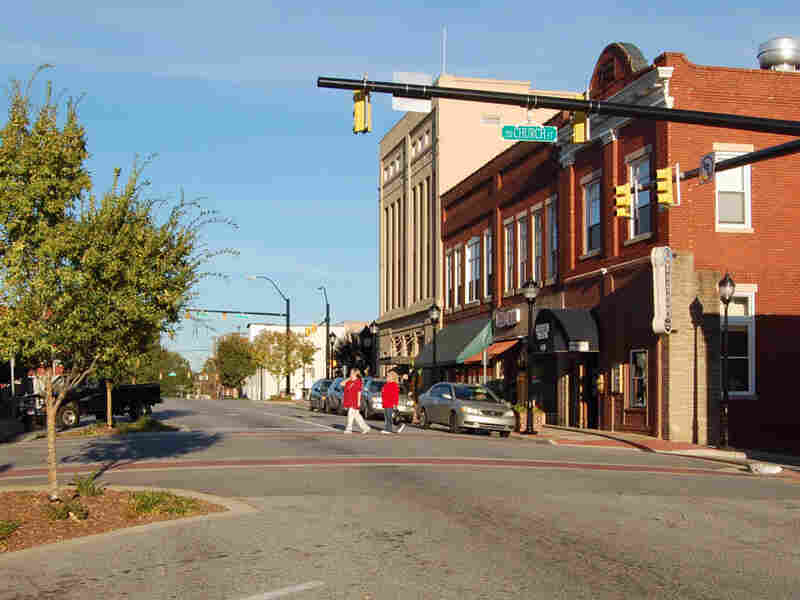 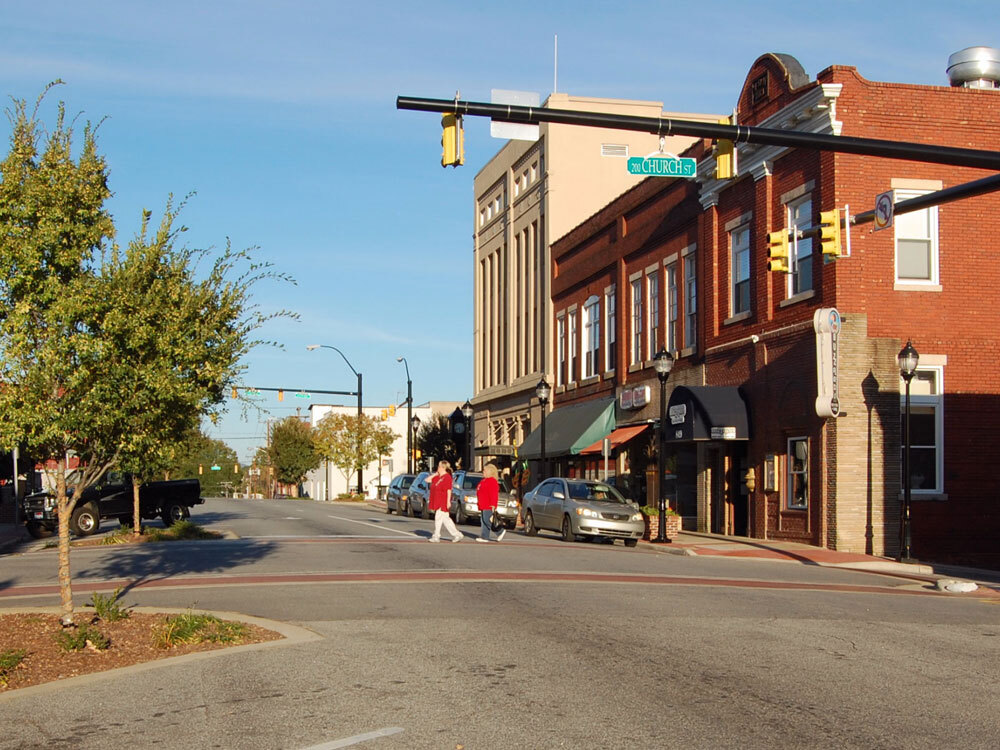 Lenoir is a city of 18,000 in the foothills of the Blue Ridge Mountains. Hard-hit by outsourcing of furniture jobs and the recession, the city's downtown sees little traffic.

More than 2 million manufacturing jobs have disappeared in the recession, and many workers are trying to retrain. But as jobs change, can workers adapt?

The story of Lenoir,N.C., a town in the foothills of the Blue Ridge Mountains, offers some clues.

Lenoir once called itself the "Furniture Capital of the South." But earlier this decade, thousands of workers there lost their furniture jobs to China.

A brave few returned to school to study information technology with this ambitious goal: Try to leap into the knowledge economy and land a job at Google.

Bill Curtis was one of them.

Have you changed careers late in life?

Curtis spent three decades cutting cloth for Broyhill Furniture. When the company sent his job to China a few years ago, it tore him up.

"The first two or three weeks is a sense of guilt, like you've done something wrong," Curtis recalled, choking up. "It was — after that — a feeling of betrayal."

But instead of dwelling on the past, Curtis was determined to change.

At age 53, he enrolled in Caldwell Community College to study information technology.

Going Back To School

A couple of years later, in 2007, Google announced that it would build a data center in Lenoir. Using the same electric grid that once powered furniture factories, the new Google facility would handle everything from Gmail messages to YouTube searches and create more than 200 jobs.

During a luncheon at the local country club, Google executive Andy Johnson described what it would be like to work there: "There's pool tables, pingpong tables, foosball," Johnson said. "We serve food — free food — to the employees."

To laid-off factory workers, that sounded great, and Google gave Curtis something to aim for.

"Most of us right now are going to try to get a job with Google," Curtis said at the time, referring to his fellow classmates at the community college. "Maybe we can hit a home run."

Margo Rice, another former furniture worker, was a fellow classmate at the college. Rice saw Google's arrival not just as a job opportunity, but also as a way to change the thinking of her community. Rice says most furniture workers did the same jobs for years and never thought about new ways of doing things.

"I was grown up to where you did what you were told and you weren't supposed to ask any questions," Rice recalled.

As for Google, Rice said: "I like their attitude. I like their openness. It's totally different from the mindset here in Caldwell County."

Read Part Two Of The Series

But learning a new field was not easy. Rice hadn't been to school since the 1970s and had to take English and learn to write papers again.

She also had to learn to dismantle hard drives, study the foreign language that is computer terminology and grasp Linux, Google's operating system.

"It was rough," Rice said wearily.

Former furniture workers weren't the only ones in her class. There were also children of furniture workers, like Derrick Lingle, a 20-year-old who had been studying computers at the school and worked part time in a local restaurant. Lingle's mother, Shelby, had worked for decades in furniture and had warned him away from the field.

"She basically said: 'You're not going into furniture. I'm not going to let you have that kind of life that I've had, because it's a grueling job,' " Lingle recalled.

He said his mother comes home at times with her clothing ruined and covered in furniture stain.

"She didn't want that kind of job for me," Lingle said, "because she knew I could do better." 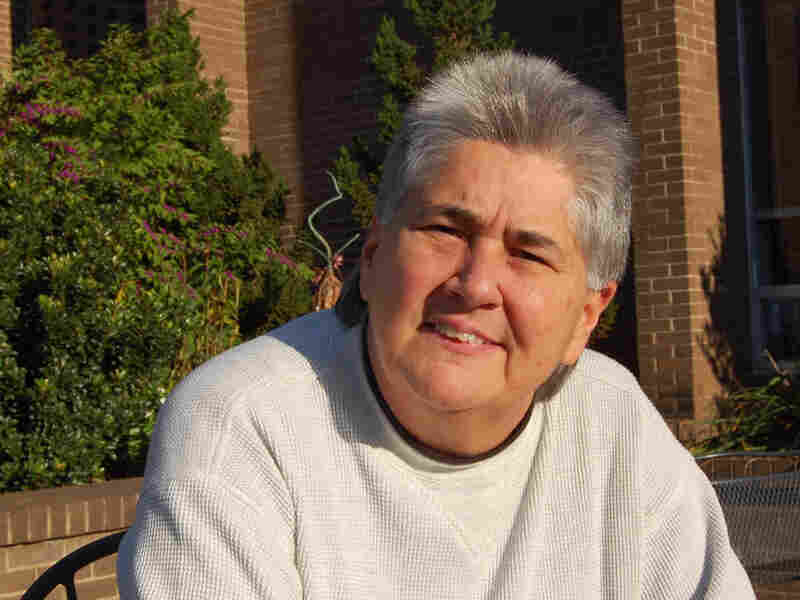 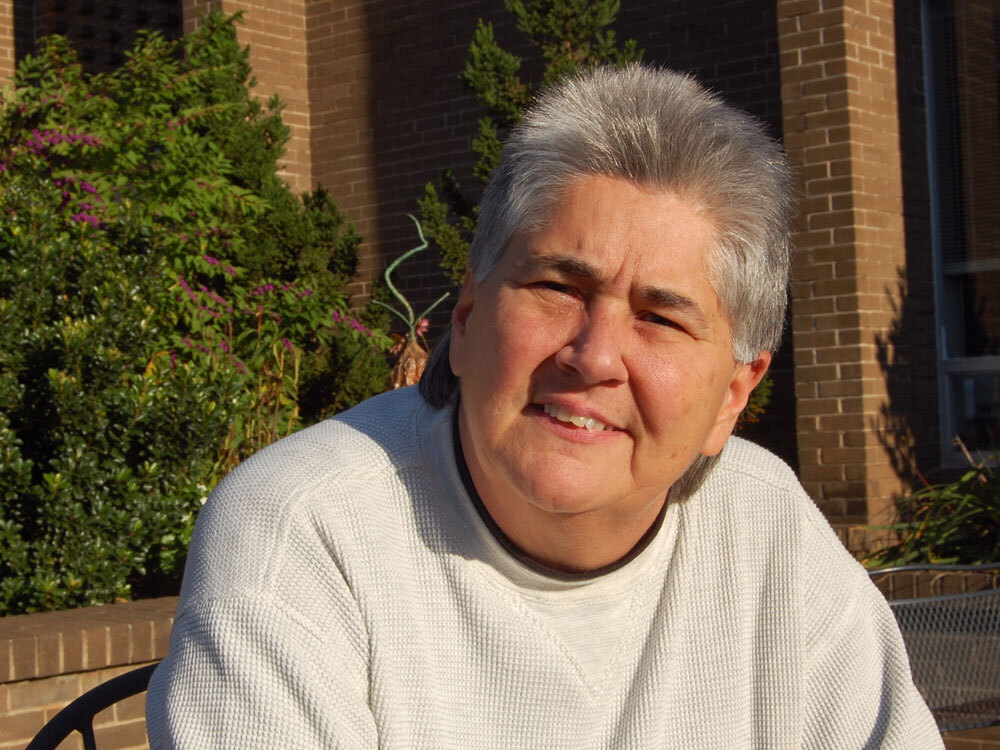 Unlike Rice, Lingle grew up with computers. He began tinkering with them at age 8 under the instruction of his aunt Sheila, who fixed them as a hobby. Lingle said figuring out how things work is just part of his nature.

"Even as a younger child, I would get in trouble by taking my mom's alarm clock apart," Lingle said. "She wasn't too happy about that."

As the community college's information technology program began to wrap up in the fall of 2007, it became clear that Curtis, Rice and Lingle would compete with fellow students for a small number of jobs at Google.

Darlene Richardson, one of their teachers and a former furniture employee herself, did not like the odds.

"My heart breaks for them," she said. "They need a job and they're very dedicated, but I'm worried. I don't think they're enough jobs for all of them."

"I would be bitterly disappointed if I don't find a job in the IT field somewhere," Curtis said.

Caldwell Community College and Technical Institute graduated its first class in October 2007. The students — about 40 in all — wore khakis and blue T-shirts with the program's insignia.

After the students received their certificates, "These Are Days," the song by 10,000 Maniacs, filled the auditorium. The students drifted out filled with hope and anxiety.

Interviews with Google were just a couple of months away.

In Part Two: Who got a job with Google? And who didn't.