Accessibility links
U.S.-Allied Sunni Groups Struggle Under Iraqi Control The Sunni militias known as the Sons of Iraq, or Sahwa movement, were credited with helping to defeat al-Qaida in Iraq during the U.S. surge that began in 2007. They have fallen on hard times since coming under Iraqi government control a year ago, facing arrest and other troubles. 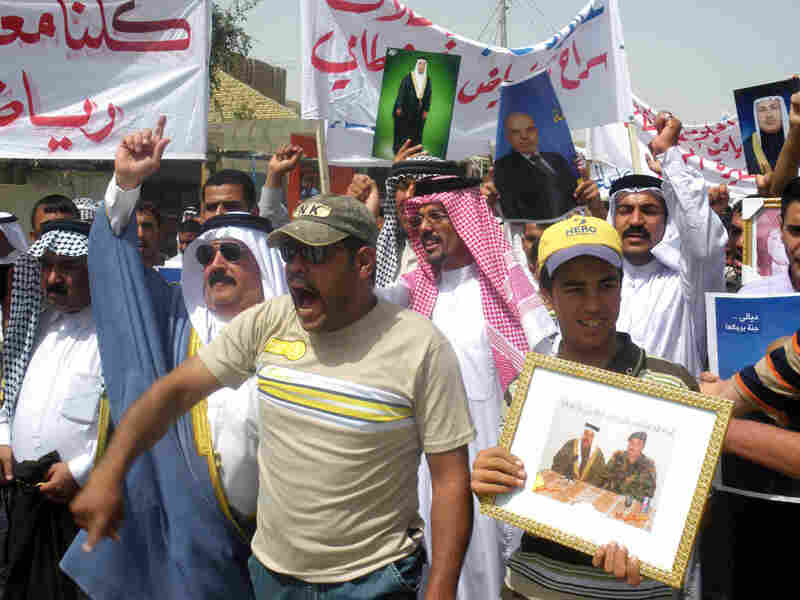 Iraqis in the northeastern town of Baqouba protest the arrest of a member of the Sahwa, or Awakening movement (also known as the Sons of Iraq) and a Sunni Muslim member of the Provincial Council, in May. The Sahwa, or Sunni militias, joined U.S. troops in the fight against al-Qaida in Iraq in 2007. Now, members face tough times. STR/AFP/Getty Images hide caption 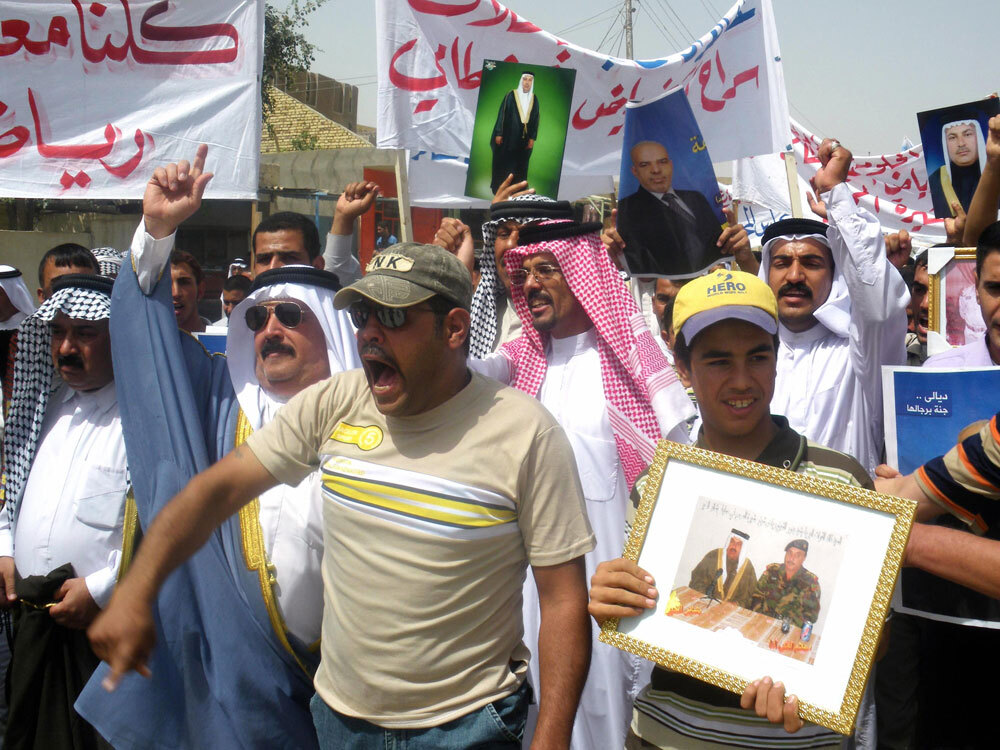 Iraqis in the northeastern town of Baqouba protest the arrest of a member of the Sahwa, or Awakening movement (also known as the Sons of Iraq) and a Sunni Muslim member of the Provincial Council, in May. The Sahwa, or Sunni militias, joined U.S. troops in the fight against al-Qaida in Iraq in 2007. Now, members face tough times.

As part of the U.S.-led security surge in Afghanistan, the Obama administration is looking at forming anti-Taliban militias among the country's tribal groups.

The militias might be patterned on the Sons of Iraq, armed groups that were credited with helping to defeat al-Qaida in Iraq during the U.S. troop surge that began in 2007.

But those Sunni Muslim militias say they've fallen on hard times since they came under control of the Shiite-dominated Iraqi government over a year ago.

The Sons of Iraq, or Sahwa (Arabic for "Awakening"), militias were an important force in Baqouba, a dusty farming hub in the Sunni Arab heartland about 35 miles north of Baghdad.

Baqouba seems quiet today, like a county seat in a farm state. It's the capital of Diyala province, but in 2007, al-Qaida declared it to be the capital of its shadowy "Islamic State of Iraq."

U.S. and Iraqi forces fought al-Qaida in the streets of Baqouba and in the orange and date-palm groves around the city. It wasn't until September 2007 that U.S.-led troops gained control of the area.

Some say they couldn't have done it without the help of the Sahwa militias, made up of former Sunni insurgents who turned against al-Qaida.

A top police intelligence official in Baqouba says the Sahwa played a major role in keeping al-Qaida from coming back by securing their own areas. The official declined to be identified because he is not authorized to speak to the news media.

The official says that after security improved, tensions began to arise between the Iraqi government forces and the Sahwa, especially after the Sahwa moved from American to Iraqi control.

Sahwa leaders were arrested, he says, sometimes on criminal charges that were trumped up as revenge by family members of al-Qaida fighters.

Police arrested a prominent Sahwa leader in Baqouba last month, and many others have left the city or are keeping a low profile.

One Sahwa leader, who calls himself Haji Khalid, is taking no chances. Recently, he met with a group of reporters in a quiet street at the edge of the city, then drove with them to another house, where he agreed to be interviewed.

Khalid says that if anyone from Sahwa shows his face in the city, he will very likely be detained the next day on false charges. He says the problem is partly political, as proved during the run-up to last year's provincial elections.

Khalid says that Sahwa leaders who announced they were running for office were promptly arrested, and many remain in prison.

The police intelligence officer confirms that provincial officials are wary of the Sahwa gaining political influence. He says that because the government considers the Sahwa to be members of armed groups, it is hesitant to allow them into Iraq's volatile political mix.

When it took control of the Sahwa, the government in Baghdad promised to integrate as many of them as possible into the Iraqi army, the police or government jobs.

U.S. military officials say the Sahwa numbered about 94,000 at their peak in the fall of 2008. Since then, about 21,000 have been recruited into the Iraqi security forces, but that effort has been stalled by a government hiring freeze prompted by low oil prices.

Khalid says his own force has dwindled from nearly 10,000 to about 8,500 — some killed or crippled in the fight with al-Qaida, he says, and others were arrested by the government.

He says the government has drastically cut salaries for the remaining Sahwa members, failed to pay them on time and denied compensation to widows of the dead and men too badly injured to return to work.

Khalid says al-Qaida still has sleeper cells in Diyala and that the province could descend again into chaos if the Sahwa militiamen stop maintaining security.

A top official in the Diyala provincial government says there is a growing frustration among the Sahwa members who haven't gotten jobs.

He asked that his name not be used, because he was critical of the national government, saying it lacked the political maturity to give Sahwa members the recognition they deserve and to incorporate them into the government.

The Iraqi government's budget for paying Sahwa members is due to run out at the end of December.

But two days after the terrorist bombings that killed more than 127 people in Baghdad on Dec. 8, Prime Minister Nouri al-Maliki told Parliament that it should keep paying the Sahwa and bringing them into the security forces.

He may be calculating that Iraq needs all the security it can get.