Accessibility links
Answering Listeners' Questions On Climate Summit Negotiators at the Copenhagen climate summit are facing an uphill task in their attempt to come up with a political agreement on global warming. Listeners ask how a developing nation is defined, about efforts by some countries to become carbon-free, the difference between global warming and climate change, and what to expect from the summit.

Negotiators at the Copenhagen climate summit are facing an uphill task in their attempt to come up with a political agreement on global warming. Listeners ask how a developing nation is defined, about efforts by some countries to become carbon-free, the difference between global warming and climate change, and what to expect from the summit.

Earlier this week, we asked you for your questions about the climate talks in Copenhagen. And for some answers, we're joined by NPR's science correspondent Richard Harris, who's at the media center in Copenhagen. Hi, Richard.

BLOCK: And we're going to get to those listener questions in a minute. But, first, let's talk about what the goals of this conference there are, especially given the turmoil over the past few days, also, how optimistic people are that the goals can be achieved.

HARRIS: Well, the goals are to come up with some sort of agreement, not even a treaty, but some sort of an agreement, political agreement about what to do about global warming. And ultimately to have a treaty in a year or so from now, but it is proving to be very difficult. The more they talk it seems, the more things they find to disagree about. And as we've been watching the trajectory of these talks, it seems to be getting harder and harder to find an agreement.

BLOCK: And the disagreements that have come up, the main ones, what are they?

HARRIS: Another big issue is to what extent the rapidly developing countries like India and China will actually take legally binding steps to deal with their own emissions, which are growing very rapidly.

BLOCK: Speaking of the developing world, that brings us to our first listener question. This is from Fran Lissamore(ph) of Cleveland Heights, Ohio. And she asks: What is the definition of a developing nation? China exports hundreds of millions of dollars worth of manufactured goods and is considered a developing nation. Why isn't China considered an industrialized nation, she wants to know?

HARRIS: That's a good question. You have to remember that a lot of these definitions really started some years ago when China was a much poor nation. They still are, in many ways, a poor country, as well as an industrialized country. The average Chinese, I think, earns about $3,000 a year. And that's far below what the average American earns. And there are more than 100 million Chinese in poverty. So, part of China is still a very poor country and still trying very hard to develop and part is highly industrialized.

BLOCK: We're going to go from a huge country to a really small one now. Another listener has a question about Iceland. Jay Manenga(ph) of Roberts, Montana tells us that he visited Iceland recently. He met with people in their ministry of energy and was impressed by their efforts to become the world's first carbon-free country. And he wants to know: Are other countries taking them seriously, even though Iceland is a small country?

HARRIS: Yes, some others are. I think Norway also aspires to be a carbon-free country quite quickly. Other countries certainly do want to be carbon-free, too, in the long run. Iceland, of course, does have a great advantage, which is that it has a lot of natural clean energy to begin with. A lot of its electricity comes from either hydroelectric dams or also natural steam geysers. They tap the steam and they use it to generate electricity. So, those are clean sources of energy. So, Iceland's got a leg up. But ultimately, most countries say it will have to be carbon free or something close to it. It may take a century or two to get there.

HARRIS: So, scientists actually prefer to say climate change because it actually wraps in things like droughts and rainfall and severe weather events and things like that that aren't captured in the phrase global warming.

BLOCK: We got another listener questions and this one is from Goven Wittaveen(ph) of St. Johns, Michigan. And he writes this: Setting aside intentions and ambitions, what actually has changed from one summit to the next? And, therefore, what should we pragmatically expect to result from the Copenhagen conclusions?

HARRIS: China initially got a free pass, essentially, for dealing with its emissions because of its developing nation status. And now the United States and many other industrialized nations say, we can't have China just keep having its emissions grow and grow and grow. We can't give it a free pass anymore. And that's actually one of the major sticking points here.

BLOCK: And one last question on the U.S. role there, President Obama arrives in Copenhagen on Friday. What kind of commitment can he make on behalf of the U.S. and then what is Congress' role in ratifying a treaty?

HARRIS: It's tough because Congress hasn't actually acted yet, so the president can only come and say, this is what we would like to do, but it's contingent on Congress acting and that leaves a lot of people upset because it's not even making a firm promise here. But there are reasons that he's not.

BLOCK: Okay, Richard, thanks a lot.

HARRIS: Sure, my pleasure.

BLOCK: That's NPR's Richard Harris talking with us from Copenhagen. And thanks to all of you who sent in your questions.

In Copenhagen, Trees May Carry The Day 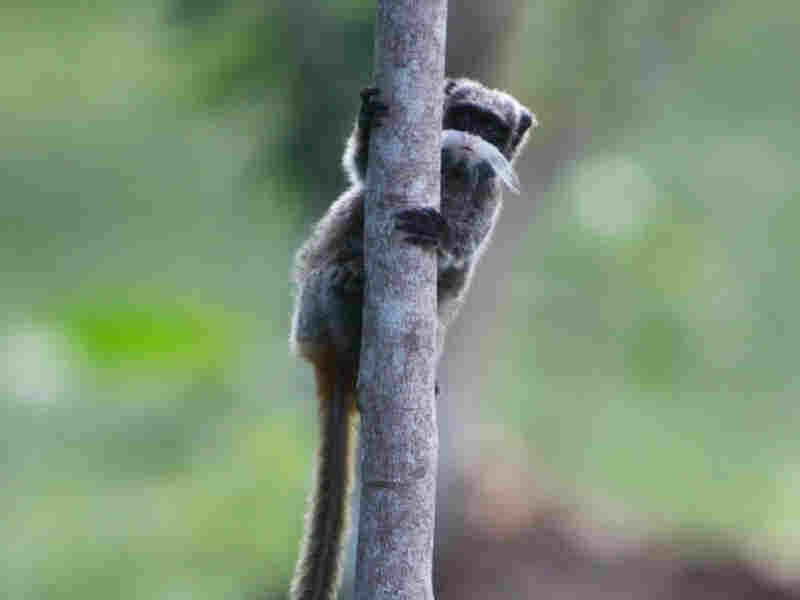 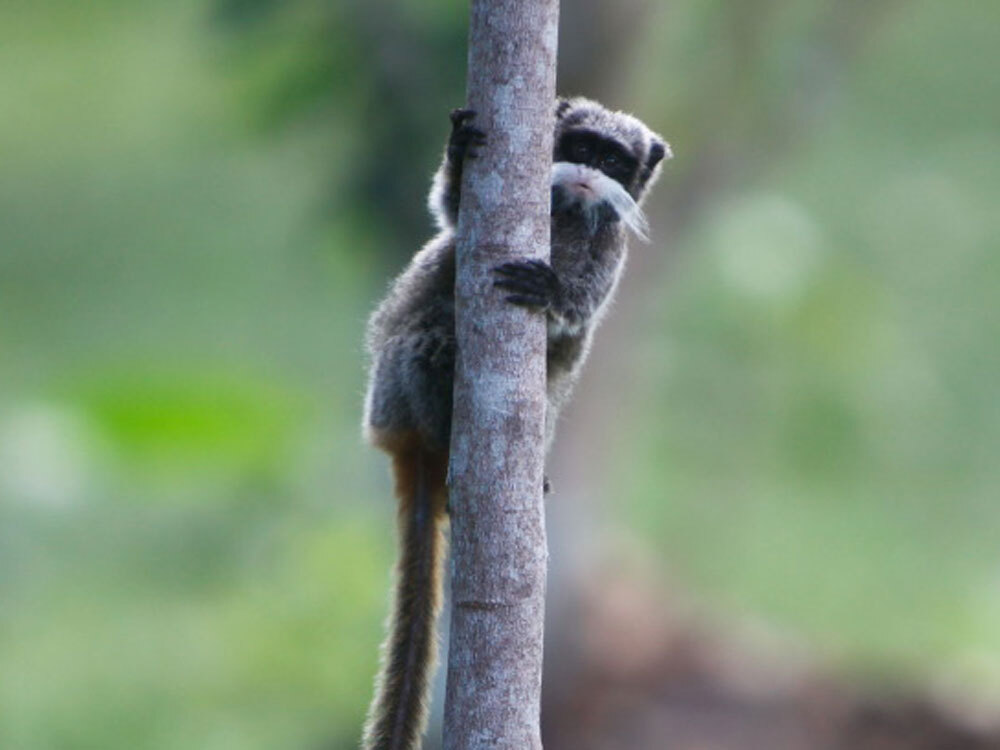 An emperor tamarin monkey clings to a tree in the Amazon basin near Madre de Dios, Peru.

Climate negotiators in Copenhagen may snatch a small victory from the jaws of defeat Wednesday as they put the final touches on a deal that would pay countries to not cut down trees (growing trees absorb carbon dioxide from the atmosphere and thus slow warming). The forestry scheme is outlined in documents that are now circulating among senior environment ministers who've just arrived in Copenhagen.

With fewer than three days left in the official calendar for the conference, no one expects to see a legally binding deal to create a new climate regime that would replace the Kyoto Protocol, which runs through 2012. The forestry scheme, called Reduction in Emissions from Deforestation and Degradation, could be the only formal agreement to emerge.

Delegates worked through the night to resolve several disagreements over how REDD would work. Essentially, countries with a lot of forests would get paid to cut fewer trees than "business as usual," or to keep forests from degrading and thus losing CO2 to the atmosphere. Besides transferring wealth to poorer countries, the scheme gives nations that must, by law, lower their emissions a way to pay someone else to do it instead — at a lower cost than retooling their own factories and power plants.

The REDD scheme had faltered over arguments about how much money would be available and whether it would flow through an international funding institution, such as the World Bank, or through a marketplace. In a marketplace, a country would earn a carbon "credit" for every ton of carbon kept in trees that aren't cut. That credit would be traded through the marketplace to anyone who needed one to offset their own emissions.

Another stumbling block was language to protect the rights of indigenous people to forests they have title to, so that they will be able to profit from REDD. Yet another was language to make sure native forests rather than plantations, such as those that produce palm oil, are favored. Critics of REDD feared that some native forests, preferred by wildlife, might actually be cut down to grow plantations to earn carbon credits. These questions are closer to resolution now.

The 1997 Kyoto Protocol did not allow forests to earn carbon credits, so a REDD agreement would open up a new source of emissions reductions. U.S. companies could theoretically participate by buying forest carbon credits, since REDD is included in the climate legislation now in Congress. And many industrialized countries — including the U.S. — have large forests of their own that might generate their own carbon credits in the future. 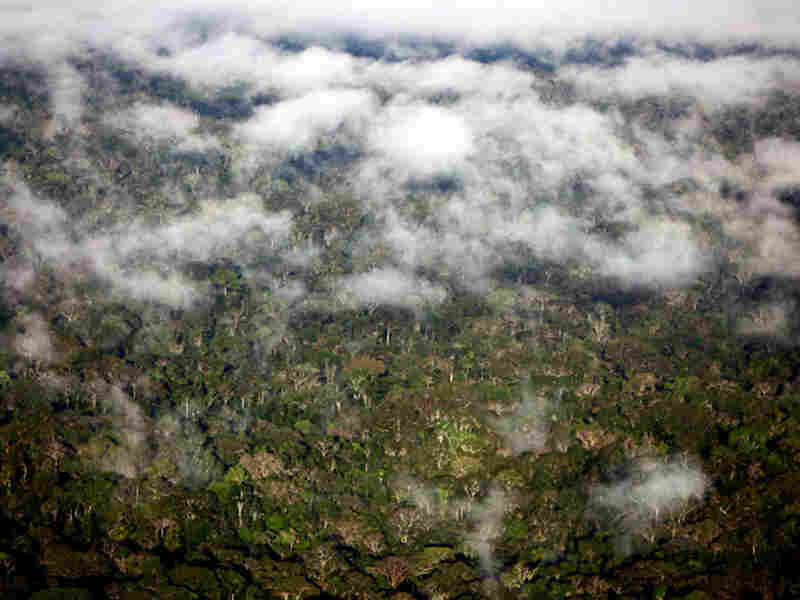 A view from the sky over unprotected rainforest, near the Manu reserve in Peru. John Poole/NPR hide caption 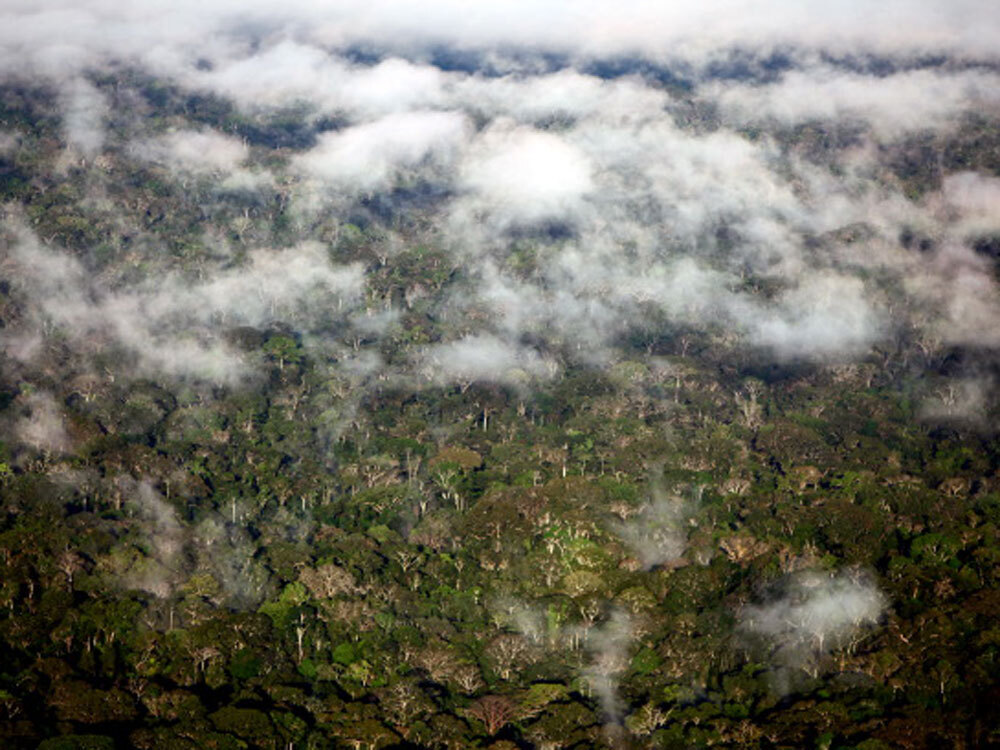 A view from the sky over unprotected rainforest, near the Manu reserve in Peru.

Another new wrinkle in the REDD scheme would include credits for saving peat bogs. Bogs contain huge amounts of greenhouse gases and could garner large sums of money via carbon crediting. Indonesia in particular has substantial peat resources and is eager to earn income from them.

It would take several years, however, for REDD to get under way. The initial phase, funded by industrialized countries, would focus on training people how to measure the extent of their forests and how fast they grow or are cut down.

While REDD negotiators make progress, delegates assigned to the tough issues of setting international emission reduction targets are getting nowhere. The U.S. and China in particular have been feuding over China's refusal to agree to legally binding emissions reductions, and the U.S.'s refusal to cut emissions beyond its initial proposal of 17 percent below 2005 levels by 2020. China also sparred with the U.S. and the European Union over its refusal to allow outsiders to verify China's voluntary emissions reductions.

Developing countries continue to voice their disdain for the $10 billion a year (over three years) that rich nations have pledged to help poor countries reduce emissions. They want more money and say the industrialized world owes it to them for the decades of carbon pollution the rich are responsible for.

More than 100 world leaders are expected to arrive over the next two days in what was to be a high-level negotiation of a final text. But representatives of Brazil, China, India and Sudan have blocked efforts by the Danish contingent to start that final process, arguing that they haven't been properly consulted on a new draft plan the Danes have circulated. Another draft proposal, from the U.N., drew criticism from the U.S. delegation because it didn't provide for sufficient oversight and verification of emissions cuts from both industrialized and developing countries.

President Obama is scheduled to address the conference Friday.