Accessibility links
The National Review: Scenes From The Tea Party Tuesday's "Red Alert" rally on Capitol Hill drew thousands of grassroots conservatives to Washington, D.C. to urge their senators to vote no on their version of Obamacare. And oh, how they flocked.

The National Review: Scenes From The Tea Party

The National Review: Scenes From The Tea Party 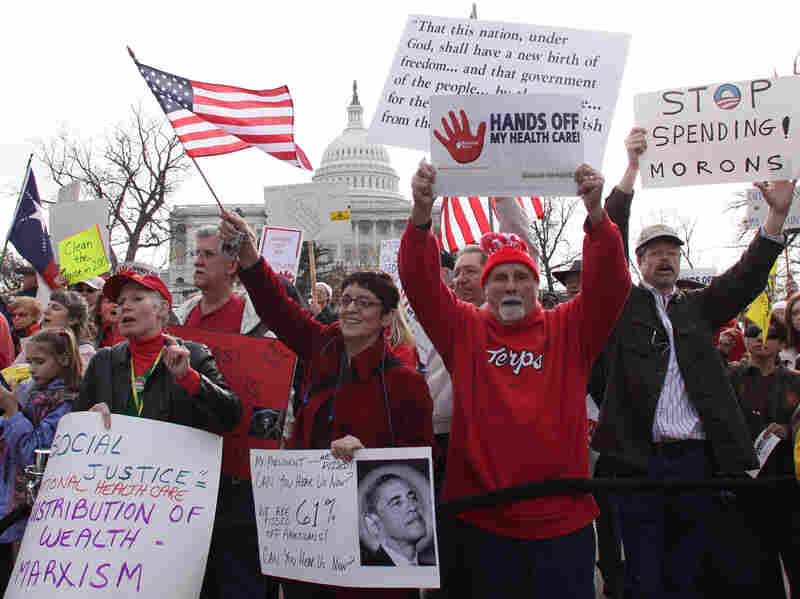 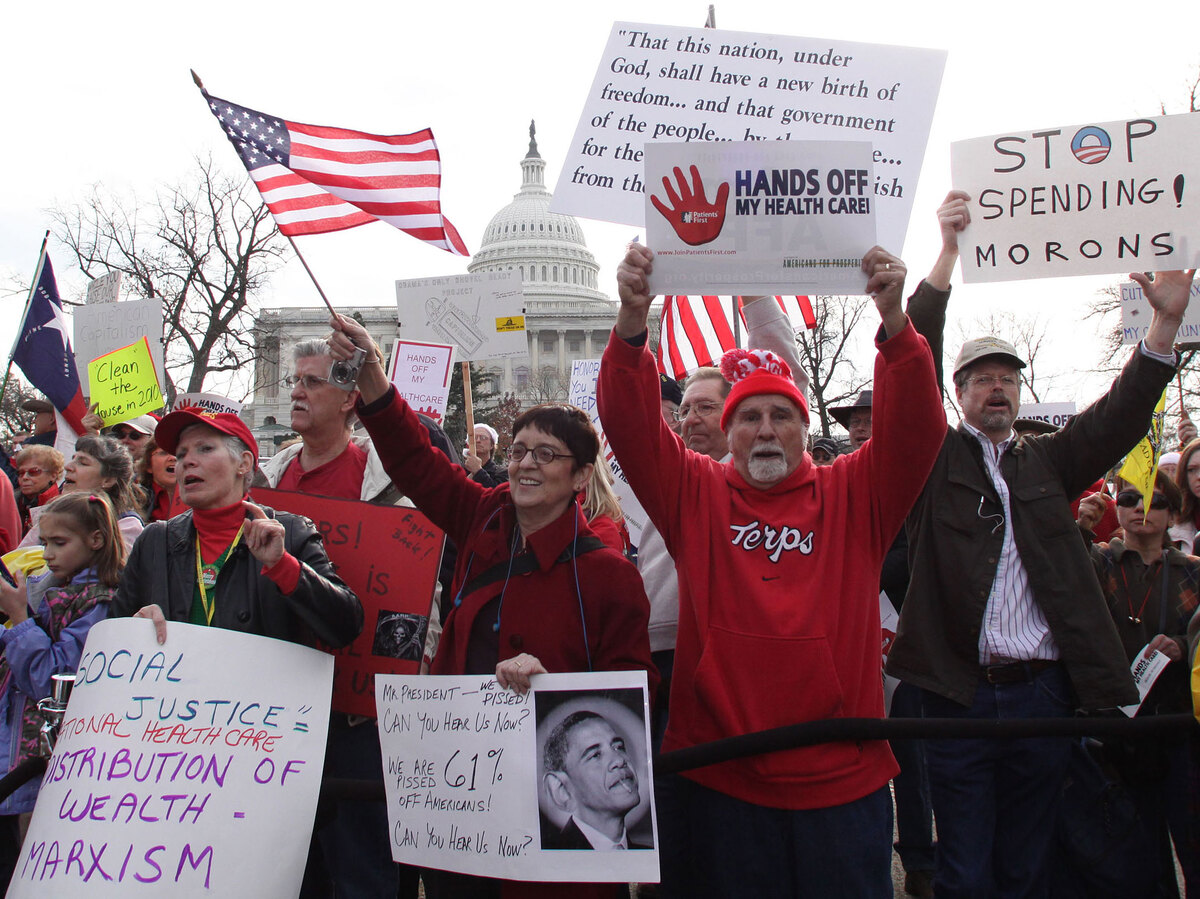 A coalition of conservative groups holds a rally against government health care, Tuesday, Dec. 15, 2009, on Capitol Hill in Washington.

What stands out about Tuesday's "Red Alert" rally on Capitol Hill, at which participants urged senators to vote no on their version of Obamacare, is how quickly the phenomenon of thousands of grassroots conservatives' making a trek to Washington, D.C., has become a regular occurrence. Less than a year ago, the crowd of tea-party protesters gathering at congressional town-hall meetings was so surprising and incongruous that the opposition insisted it couldn't be genuine grassroots and had to represent some sort of corporate-funded, ready-made "astroturf."

All year long, members of the heavily Democratic Congress have engaged in a weird chess match with the segment of the public that saw this year's effort to change America's health-care system as a replay of the 1993–94 push for Hillarycare. It's easy to forget that there was once an August deadline for Congress to pass a bill. When building a consensus proved much harder than expected, members of Congress aimed to make the sales pitch during the summer recess; but they found themselves confronted with angry, fired-up, and often well-informed skeptics who were immune to the usual talking points.

When the loud and sometimes unruly counter-arguments threatened to drown out the Democrats' message, some members stopped holding town-hall meetings entirely, or shifted to invitation-only sales pitches. When the members stopped coming to the public, the skeptics started coming to the members. Back in November, some 10,000 tea-party activists turned out on Capitol Hill, on relatively short notice, to attend a rally and make "house calls" on their members.

In the court of public opinion, the opposition is steadily winning: Americans were roughly evenly divided on Obamacare in mid-summer polls, but the average on Pollster.com now shows that 54.7 percent oppose the legislation and only 38.5 percent support it. A CNN poll in early December found a stunning 61 percent opposing the bill.

The Republican senators who addressed Tuesday's "Red Alert" rally knew that to many of the several thousand protesters before them, the bill itself was an injury, but their elected representatives' unwillingness to consider the opposing arguments was the truly intolerable insult.

Sen. Johnny Isakson of Georgia played to the crowd's sense of being ignored by those whose job it is to represent their concerns. "Before I came out here, I stood out on that balcony over there," he said, gesturing to the Capitol building behind him. "And you know what? I could hear you loud and clear!"

Sen. Jim DeMint of South Carolina reminded the crowd that Senate Democrats were at the White House, meeting with a president who was expected to urge them to "make history" rather than "[listen] to their constituents.""

Sen. Richard Burr of North Carolina — who in an ordinary cycle would seem vulnerable, given his mediocre approval ratings, but who has watched one North Carolina Democrat after another decline to run against him in 2010 — accused the current congressional leadership of "a display of true arrogance" and a "blatant disregard for what the American people want." Acknowledging the difficulty of holding the line with only 40 votes, he told the crowd, "We see you as the cavalry."

Speakers from the Tea Party Patriots organization spoke of visiting a congressional office and hearing no phones ringing, even though their calls to those same offices met busy signals all day. For many attendees, the only way to have their voices heard by their elected leaders is to literally stand outside their offices and shout. No wonder one of the most common signs at Tuesday's rally read, "Listen to ME!"

Radio talk-show host Laura Ingraham finished the event with a signature barnburner, but her closing declaration echoed the day's theme: "You no longer have our consent!" she cried to the Capitol building behind her.

The fluidity of the legislation makes it hard to put credence in the claims of its supporters. Most senators could not say with 100 percent certainty what is included in the current version. Ordinary citizens who have tried to read the bill have found it written in a legislative jargon that is about as easy to discern as Esperanto. The much-touted CBO score of budget prudence relies on kicking the hard decisions down the road. One day, a large chunk of Democrats are insisting that they would rather see no bill enacted than pass one without a public option; the next day, the public option is out, and in the coming days, we're likely to see many of those blustery progressives folding like Japanese fans. One evening, Senate Majority Leader Harry Reid is cheerfully suggesting that a filibuster-proof deal is almost complete; the next morning, moderate Senate Democrats sound much more skeptical.

All of this increasingly opaque back-and-forth occurs in an atmosphere of artificial drama, driven by a deadline that no one ever explicitly set and no one ever quite justifies. While the opposition gathered on the Senate side of Capitol Hill, the Democratic senators themselves were, as DeMint said, down Pennsylvania Avenue, hearing President Obama tell them that this was their "last chance" to pass comprehensive health-care reform. That comment echoed one of Obama's rallying cries from earlier in the year, when he said that if health-care reform didn't pass in 2009, it wasn't going to pass. Throughout the lengthy legislative process, any notion of going back to the drawing board and starting over has been dismissed; both sides are acting as if this is, indeed, the final battle on health care for a generation.

Why? Why couldn't a better-thought-out bill be passed early next year? If passing legislation so close to Election Day 2010 represents an act of political self-immolation of metaphysical certitude, perhaps it's worth reexamining whether it's such a good idea in the first place.

Skeptics suspect that an unpopular bill will become impossible to pass with further public scrutiny; the goal of Reid and Pelosi is to get something they can call "health reform" passed as quickly as possible in order to secure the political win (such as it is) and deal with the consequences later. The majority of senators are approaching what they have declared to be the preeminent domestic issue of our time in the manner of a three-card Monte dealer. No wonder thousands of Americans are willing to travel to Washington, again and again, to do what they can to stop the farce.