Accessibility links
For U.S., Vast Challenge To Expand Afghan Forces President Obama's strategy for Afghanistan includes an ambitious plan to churn out thousands of new army and police officers to fight the Taliban and al-Qaida. But the rapid buildup could create many more problems than it solves.

Twice as many recruits joined the Afghan army in the first two weeks of December as during the entire previous month. Among them are hundreds of young men at a military training center in the hills of eastern Kabul.

President Obama's strategy for Afghanistan hinges on a rapid buildup of the Afghan army and police force to fight the Taliban and al-Qaida so that U.S. troops can start coming home in mid-2011.

The ambitious plan seeks to churn out thousands of new soldiers and police officers in the coming months from training academies across Afghanistan. By 2012, U.S. military officials hope to double the Afghan security forces from its current size to 400,000 people.

But the rapid expansion could create many more problems than it solves. And there's the cost: $10 billion a year, according to Afghan President Hamid Karzai, who predicts it will have to be funded by the West for the next two decades.

Afghan commanders predict that pay raises and signing bonuses that go into effect Dec. 23 will lure even more recruits. The raise means an average Afghan soldier and police officer will take home about $250 a month. That's about $50 less than Taliban militants are said to make each month during fighting season.

But Afghan recruiters admit the surge of recruits is more likely linked to Afghanistan's brutal winter and the resulting slowdown in Taliban fighting than to bonuses.

Boot camp appeals to recruits, who get a lifestyle most cannot afford — regular meals, a warm place to sleep, socks and new boots.

What the Afghan government gets in return is hardly ideal. Less than 1 out of every 9 Afghan soldiers can read and write. Police officers are also largely illiterate, and about 17 percent of them test positive for illegal drugs.

Another issue is diversity. The security forces today more or less reflect Afghanistan's many ethnic groups, but recruiters admit that far too few men from volatile, insurgent-dominated areas are signing up — such as Kandahar, the most politically important province in Afghanistan outside Kabul.

Seven years and billions of dollars later, Western military officials are still struggling to figure out the right formula for building and training Afghan forces.

The recent volume of new recruits could help, says Brig Gen. Simon Levy, who heads the Western advisory group to the Afghan army.

"Because we are getting more recruits, we can afford to perhaps be a little bit more ruthless about who we send back [for] a term if they are not good enough," he says.

To accommodate the rush, recruits are now trained for only eight weeks instead of 10. Levy says the training that was cut out of the course was useless to most of them anyway.

"Since they can't read, there is no point to do map reading with a soldier. Most things we do are oriented toward practical soldiering. So when they are on the range, you have to teach a soldier how to pull the trigger by squeezing rather than pulling," he says.

Levy says they still plan to help soldiers learn to read at least a little, so they can do simple things like identify the number on the butt of their rifle.

There are other problems that won't be as easy to fix.

One is retention. Soldiers who return to their villages after one fighting season often never return. And while dropout and absenteeism rates reported by U.S. and Afghan officials are somewhere around 20 percent, the actual number is very likely much higher, analysts say. 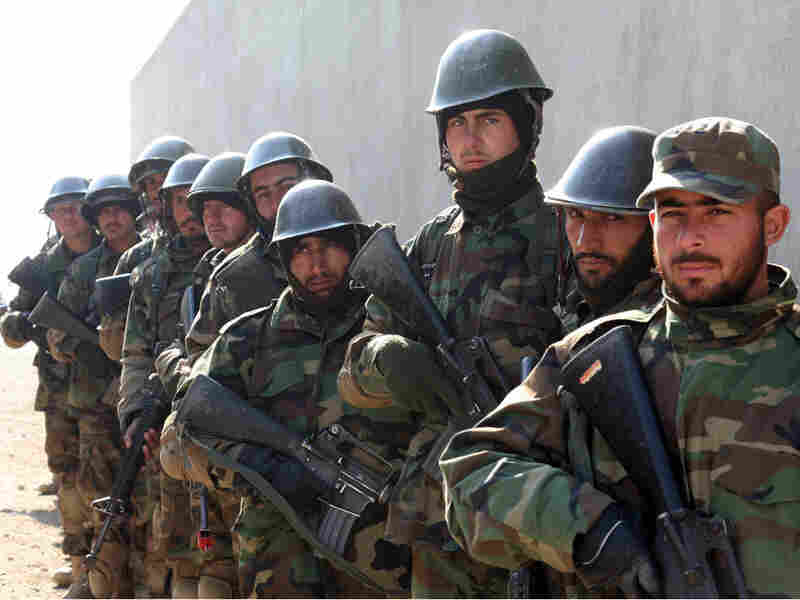 Afghan soldiers in training prepare to run a mock raid on a house. To speed recruits through their training, it has been cut from 10 weeks to eight. Tom Bullock/NPR hide caption 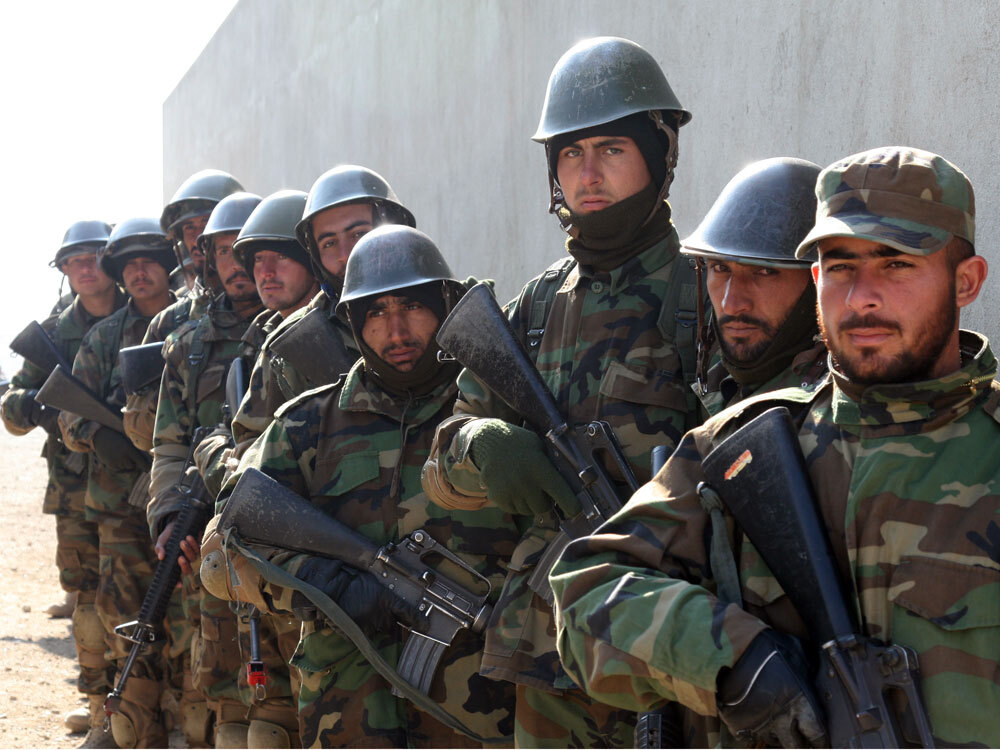 Afghan soldiers in training prepare to run a mock raid on a house. To speed recruits through their training, it has been cut from 10 weeks to eight.

That's because many soldiers and policemen exist only as names on paper, created by local commanders to collect additional salaries.

Christine Fair, an assistant professor at Georgetown University, co-authored a U.S. Institute of Peace study earlier this year on Afghan security forces and the need for a game-changing strategy in Afghanistan. She estimates that more than 25 percent of officers on the police force are "ghost police" — people who don't show up but who are still on the payroll.

"So when I see a number like 95,000, which is the number in the inventory as of Dec. 10, there are a lot of questions about that number," Fair says.

At the end of the day, Afghanistan must be defended by Afghans, and that's what we will build — enabling the Afghans to do that over the coming months and years.

Nor do Afghan citizens necessarily trust the Afghan security forces they encounter. Police officers, for example, are widely accused of demanding bribes.

On a recent afternoon in Arghandab, a Taliban-rife district outside Kandahar city, Afghan soldiers weren't making many friends, either.

Children in one village in Arghandab who tried to get close to an arriving American development team were run off by menacing Afghan soldiers with guns. One soldier searching villagers pocketed an orange he found on a young boy, then hit the youth with a stick.

The Afghan lieutenant who heads the platoon wasn't much better behaved during a meeting with tribal elders.

He interrupted a provincial council member in midsentence with a plea to the locals to report any bombs or militants they come across. The lieutenant, who is from an ethnic group not found in this province, spoke to the villagers in Dari instead of Pashto, which is spoken here.

The village elders averted their eyes, a sign that the officer is an unwelcome stranger.

NATO advisers are struggling to help with another key Afghan military and police issue: getting the most basic supplies to soldiers and police officers in the field. 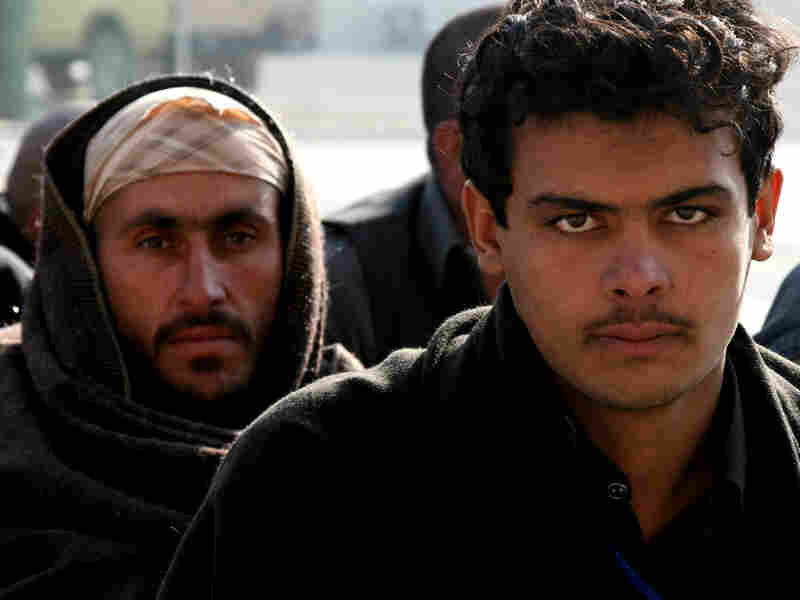 Afghan recruits wait to be processed at the Kabul Military Training Center. On paper the Afghan army proportionally represents the country's ethnic groups. But in reality, very few of these recruits are from the troubled south of Afghanistan. Tom Bullock/NPR hide caption 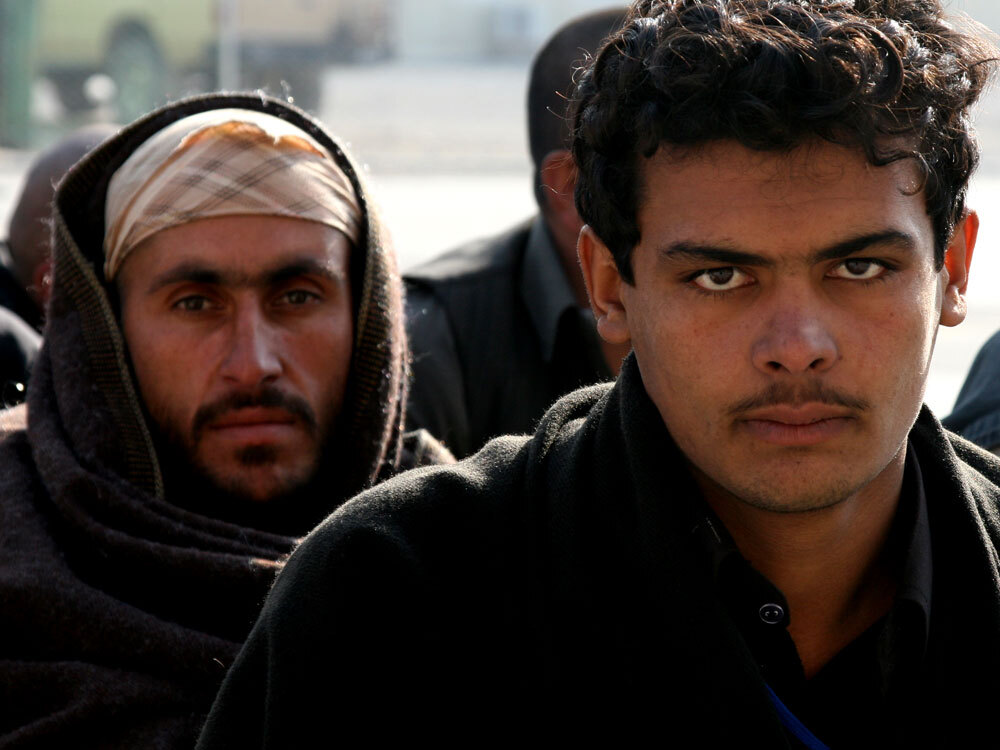 Afghan recruits wait to be processed at the Kabul Military Training Center. On paper the Afghan army proportionally represents the country's ethnic groups. But in reality, very few of these recruits are from the troubled south of Afghanistan.

The policemen complained they weren't given shovels to deal with the heavy snow, nor enough wood nor generator fuel to heat and light their outpost.

In Kabul, American military officials say the problem isn't so much that the supplies don't exist. It's more a matter of getting them pushed through the pipeline.

U.S. Brig. Gen. David Hogg is the deputy commander of the international coalition arm responsible for training the Afghan army.

"What we see is when it gets to the corps level, there is a hesitancy to issue out equipment. There is a hoarding mentality. So it's a challenge and we're working with the leadership on. And it's going to take a lot work to move it forward," he says.

Such challenges have to be overcome, and quickly, the top U.S. commander in Afghanistan, Gen. Stanley McChrystal, told his senior officers in a recent video conference call.

"At the end of the day, Afghanistan must be defended by Afghans, and that's what we will build — enabling the Afghans to do that over the coming months and years," McChrystal said.

But many others, such as Fair, say American political and military leaders should consider whether a rapid expansion makes sense.

"In some sense we're just having to make a margarita out of a bunch of really lousy lemons that we've inherited through the years of the Bush administration and the neglect of building a competent force," Fair says.

She adds that more troops and police won't matter if there's no meaningful justice system or local governance.

She also criticizes the White House for not putting enough pressure on Afghanistan's neighbor Pakistan, which receives billions of dollars in U.S. aid despite continued allegations that its security agencies harbor and support Afghan insurgents.

"If the Pakistan government was not absolutely dedicated to continuing to support the Taliban, I think one could reasonably ask, would you need an [Afghan National Security Force] of this size?" she says.