Accessibility links
Film Director Battles For Soul Of Chinese Cinema China's most famous film director aims to do battle with Hollywood for the China market with his latest film, a remake of the Coen brothers' Blood Simple. From art-house auteur, Zhang Yimou has transformed into the director of Beijing-sanctioned spectacles, including the ceremonies of the Beijing Olympics. 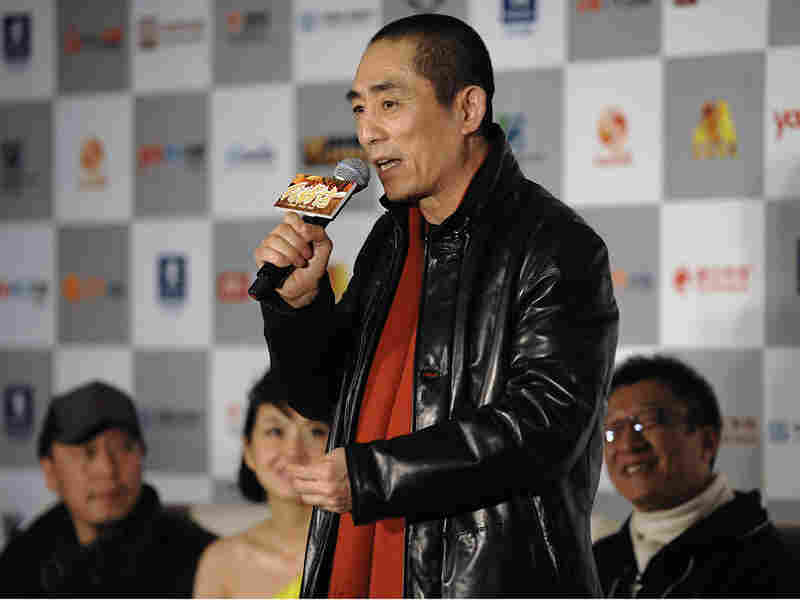 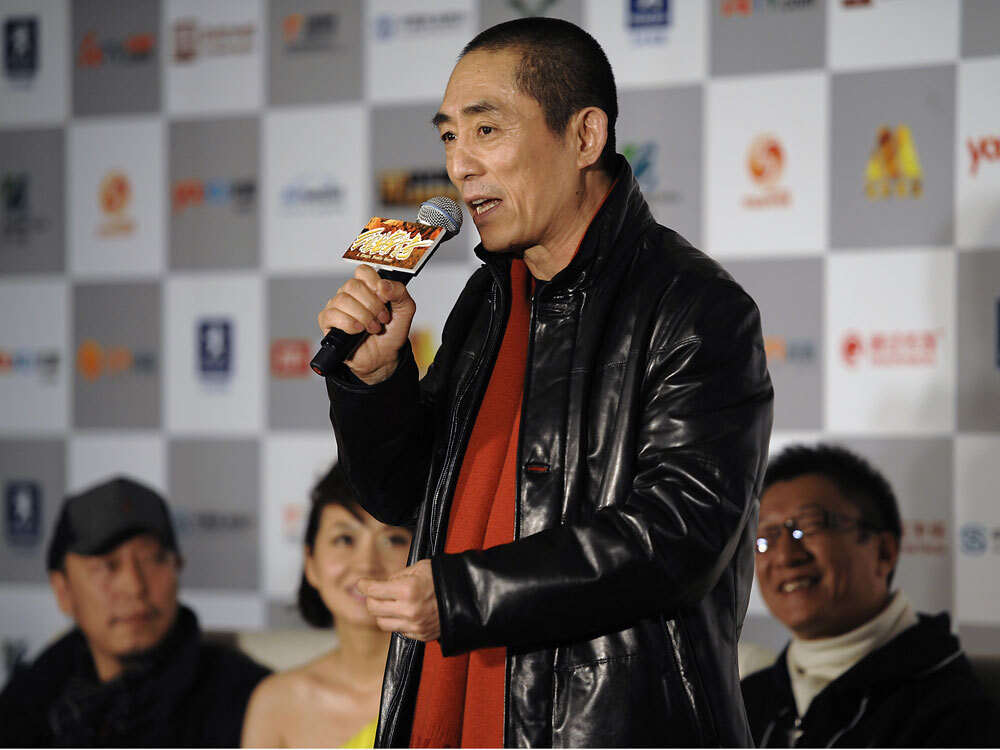 Chinese film director Zhang Yimou speaks about his new movie, A Simple Noodle Story, during a news conference Dec. 9 in Beijing. The film, a remake of the Coen brothers' 1984 noir thriller Blood Simple, is Zhang's first movie since directing the Olympic ceremonies in Beijing.

With his latest comedy-murder movie, China's most famous film director aims to do battle with Hollywood for the China market. Zhang Yimou has undergone a dramatic transformation, from art-house auteur of the early 1990s to the man who orchestrated the spectacular Olympic opening ceremonies in Beijing.

Now, in his first film since the Olympics, his work has taken yet another direction, with a radical remake of Blood Simple, the 1984 Joel and Ethan Coen film.

The Coen brothers film is a nerve-jangling noir thriller set in a Texas bar. The story revolves around the chain of events when a good-for-nothing bar owner hires a detective to kill his wife and her lover.

Zhang's version, A Simple Noodle Story, transplants the action to a remote noodle shop in ancient China, leaving much of the storyline intact and using some identical shots.

Zhang, 58, says he set the story in the past for the sake of ease. "It's more convenient setting it in ancient China. The level of freedom is greater. It's not that easy to shoot contemporary material. Lots of things are forbidden," Zhang says.

Visually, the film is eye-catching, with flashes of bright clothing worn by the cast shimmering against an extraordinary backdrop of mountains striped with red dust.

The surprise is the director's decision to remake the movie as a slapstick comedy with song-and-dance numbers revolving around noodle-making. The cast includes some of China's top comedians: Xiao Shenyang as a nervous girly guy and Zhao Benshang as a goofy character with buck teeth who falls down almost every time he appears.

It's a far cry from Zhang's early trailblazing films, such as Raise The Red Lantern and To Live, which were seen as allegories against China's Communist bureaucracy.

"It's because I shot such serious films before, I wanted to experiment with a different style. In fact, there were commercial factors. We wanted to make a New Year film," he says.

Commercial factors also were behind his decision to incorporate elements of Chinese folk culture, including errenzhuan, a form of comic dialogue from northeastern China.

The rise of the mainland China cinema market is prompting Chinese directors to change their focus, Zhang says, and he is no exception. Ten years ago, his films relied on the international market; some critics even sneered that his main audience were international film festival judges.

Now, Zhang believes a Chinese film can earn domestic revenues that are 10 times what it makes overseas.

His argument is that by being commercial, he is doing battle with Hollywood for the soul of Chinese cinema.

"Young people are the key. If they lose their interest in domestic movies, we will be in big trouble. Then China's film market will be occupied by foreigners. Hong Kong, Taiwan and Korea are examples of this. The mainland is our last battleground. So in this case, it's not shameful to shoot commercial or funny movies," he says.

Young people are the key. If they lose their interest in domestic movies, we will be in big trouble. Then China's film market will be occupied by foreigners. Hong Kong, Taiwan and Korea are examples of this. The mainland is our last battleground.

Zhang staged the 2008 Olympic opening ceremony in Beijing, which one sports research consultancy, Future Sports and Entertainment, says was the most viewed television event ever, watched by 1 billion people or about 15 percent of the world's population. He subsequently directed the Olympic closing ceremony and the military parade marking China's 60th anniversary in 2009.

These gigantic spectacles earned Zhang accolades, but also raised doubts overseas about whether he had become the "artist in residence" to China's authoritarian government.

In China, his status has also been transformed, according to Yang Junlei, an associate professor at Fudan University in Shanghai.

"Before the Olympics, Zhang was a trailblazer for an elite minority of culture lovers," she says. "But afterward, because of the success of the opening ceremony, he's become a national cultural hero who is widely approved of by ordinary Chinese people."

No Time For Self-Doubt

Despite his state-sponsored assignments, Zhang denies losing his independence. He argues that censorship limits all Chinese directors equally, and he denies being burdened by the expectation of his new stature as a national icon.

"I can't think about the pressure," he says, smiling. "If you thought about it, you wouldn't able to do anything. You have to have your feet on the ground."

A Simple Noodle Story, which premiered in China on Dec. 11, took in almost $15 million at the box office in its first four days. Despite its commercial success, it's been panned. Half of those answering one online survey at a popular Web site, Sina.com, thought it was terrible or worse than expected.

But the director professes not to care. He has already moved on to his next project, a love story set during the Cultural Revolution. And after that, his producer Zhang Weiping says the director is talking to Brad Pitt, Tom Cruise and Tom Hanks for a role set during the Japanese occupation of China.

Eyes ever on the market, Zhang Yimou appears to be setting his sights on not just saving Chinese cinema, but also conquering Hollywood.