Accessibility links
Of Fish And Flies: The Evolutionary Role Of Genes Genes called noncoding genes tell other genes when to switch on and off. New research on this type of gene might explain rapid adaptations like lactose intolerance in humans, the spikes on a fish stickleback and varying colors of flies.

During evolution, genes change, and new species emerge. But scientists are finding that it's not just genes that change. Other pieces of DNA that determine when and where genes turn on and off may be just as important. 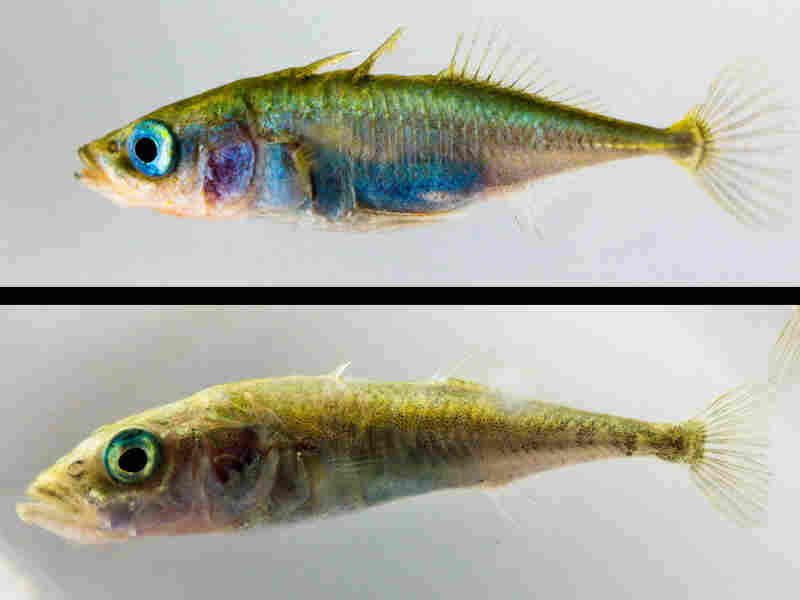 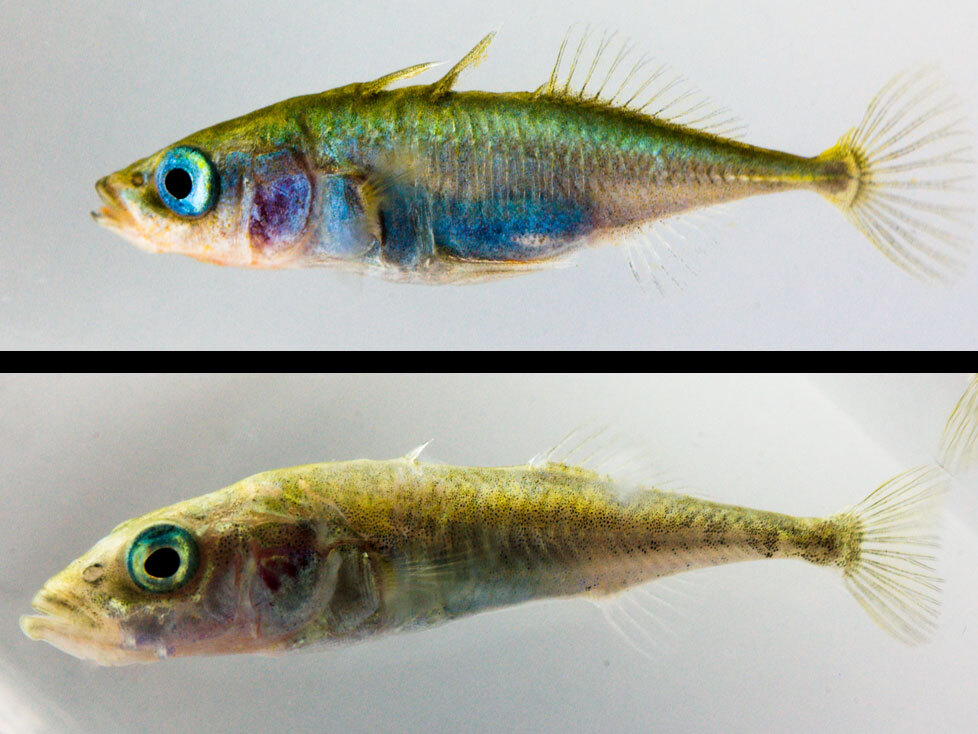 A good example of this is work by David Kingsley, a biologist at Stanford University. He's been studying how a small fish called a stickleback has evolved.

In particular, he's been studying the past 10,000 years of stickleback evolution, because 10,000 years ago melting glaciers caused new rivers, streams and lakes to appear. He says that provided sticklebacks with new environments, new food sources and new predators.

Developing Spines, Or Not

Today there are many different varieties of stickleback, each well suited to its particular environment. "We'd like to know what it is at the DNA level, at the genetic level, in order to allow these organisms to colonize and then thrive in new environmental conditions."

Kingsley says one thing that's critical for thriving is having the right defenses.

For example, in a lake full of trout that like to dine on stickleback, the smaller fish tends to have a lot of spines. But in regions where insects are prevalent, having fewer spines is better because insects eat sticklebacks by grabbing onto those spines.

Kingsbury tracked down the gene responsible for building spines in sticklebacks and found it did a lot more things than just that.

"It normally turns on in the brain, and in the jaw, as well as in a spot along the side of the body where this hind fin or pelvic apparatus will develop," says Kingsley.

That's where the pelvic spines are located.

Disabling this gene everywhere would be fatal to the animal. Even a stickleback needs a brain. What Kingsley discovered is that this gene is virtually identical in every type of stickleback he has studied, no matter what its armament. What's changed is where the gene is switched on.

As he reports in the journal Science, it's what's called a regulatory element that has changed.

Geneticist Sean Carroll sees a similar phenomenon in fruit flies. In this week's Science, he describes how one of these regulatory elements has caused fruit flies living at high altitudes to be darker than flies in the lowlands. 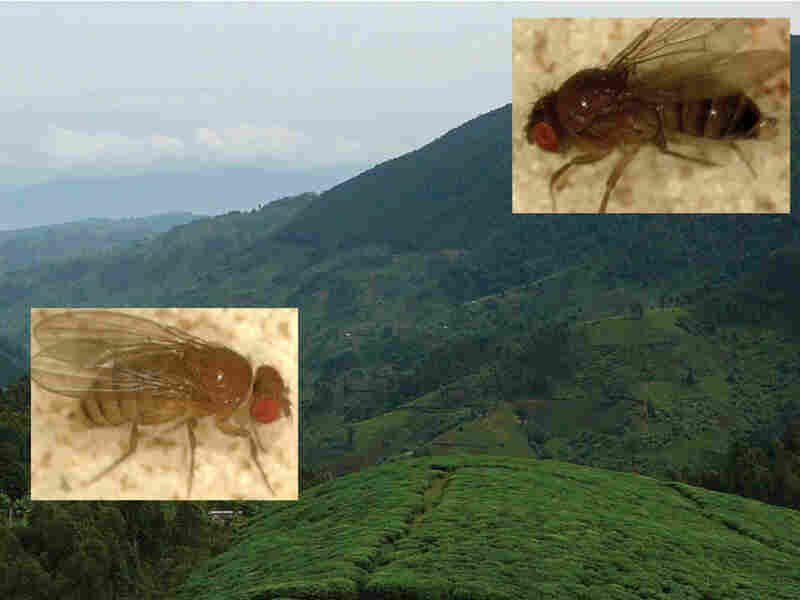 These two flies are different colors because of the altitudes at which they live. The photos have been superimposed on a Rwandan landscape to illustrate the link between altitude and this trait. John Pool/Science hide caption 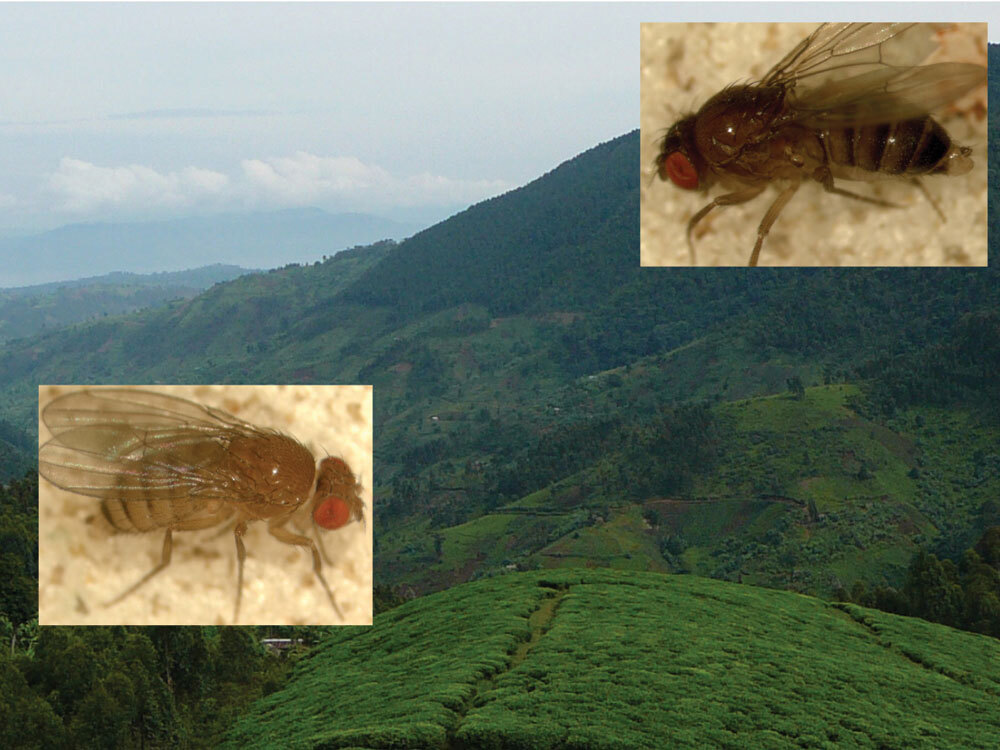 These two flies are different colors because of the altitudes at which they live. The photos have been superimposed on a Rwandan landscape to illustrate the link between altitude and this trait.

"And that's occurred by a small number of mutations that have occurred fairly recently in fruit flies living in east Africa," says Carroll.

Once upon a time, the dogma was that genes coded for proteins, and proteins made the tissues that made us. But recently, Carroll says there's been increased interest in the segments of DNA that don't actually code for proteins, but determine how those genes that do code for proteins are expressed.

"If we take a big picture of our genome," says Carroll, "only about 1 1/2 percent of the 3 billion letters of our DNA code for proteins. And we think that several more percent is involved in doing just this. Of controlling how those genes that encode proteins are being used."

In fact, these controlling bits of DNA have already helped explain some inherited conditions. Take lactose intolerance. People who can't digest milk as adults have the same protein coding gene as people who can. Kingsley says what's changed is a regulatory element that decides when to switch off that gene.

"You either only express that during the nursing period or you continue to express it into adulthood. And that simple change in how long is the milk-digestion enzyme expressed, is enough to make the difference between somebody who can enjoy ice cream, or get sick when they try to eat it," says Kingsley.

Kingsley expects these regulatory elements will play a role in a variety of human diseases, not to mention a variety of defensive changes for sticklebacks.