Accessibility links
Furniture Work Shifts From N.C. To South China Some of the thousands of jobs that were lost in Lenoir and other North Carolina towns went to Dalingshan, a South China industrial city with factories as far as the eye can see. One of the biggest operations was owned by Lacquer Craft, an Asian furniture giant. 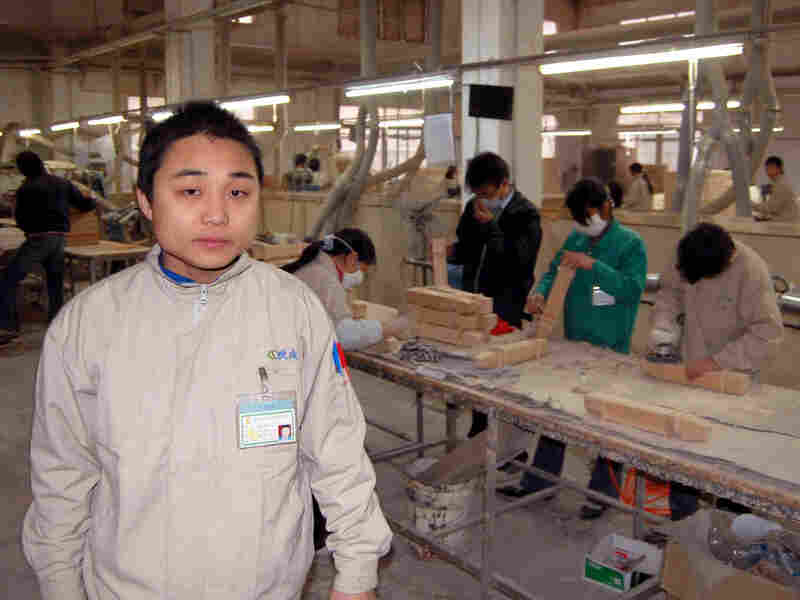 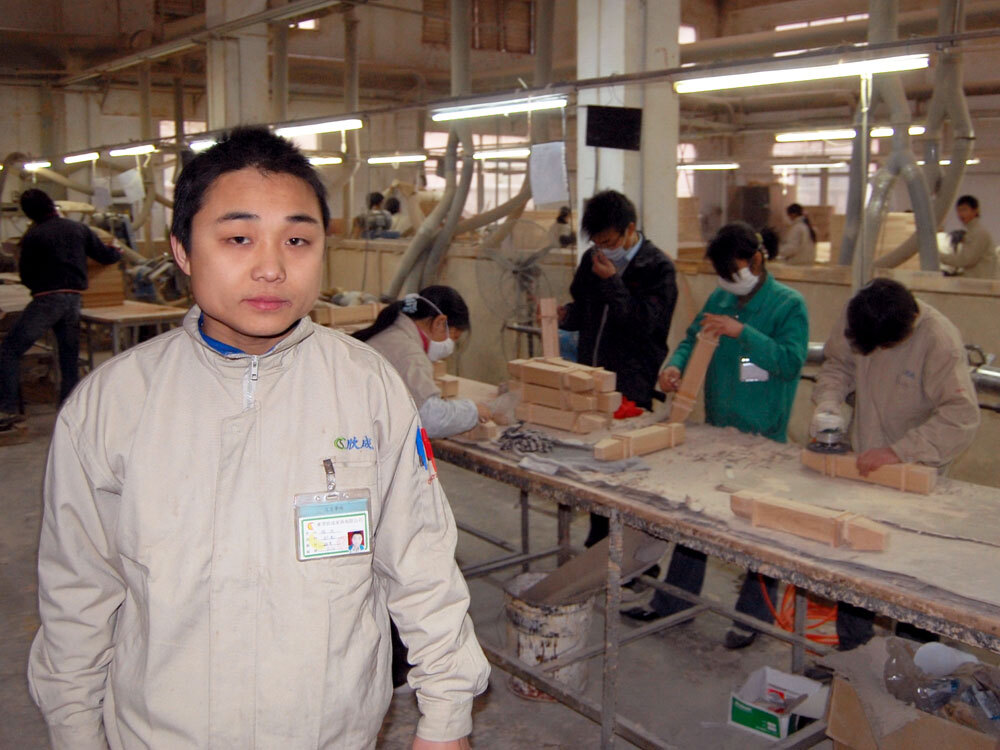 By early 2008, Chen Hong had more than doubled his salary at this factory, which makes furniture for export to the U.S. Surrounding Guangdong province was suffering from a labor shortage so migrants like Chen could pick and choose where they worked.

Bill Curtis watched his job slip away piece by piece.

He spent his adult life cutting cloth for sofas at Broyhill Furniture in Lenoir, a town in the foothills of the Blue Ridge Mountains of North Carolina. Over time, Curtis noticed more cloth arriving at his factory from overseas. Then, Broyhill began slashing his hours.

"Work just started to dwindle," Curtis recalled. "The more we saw leave, the more containers we saw coming in. So we knew that's where our jobs went — China."

Curtis finally lost his job in 2005 as American companies continued to shut down factories in the U.S. and sent the work to China. In fact, more than 300,000 furniture jobs have disappeared from the United States this decade, according to the U.S. Bureau of Labor Statistics.

Who got some of those jobs, and what sort of lives do they lead?

"I've seen some pictures of furniture factories over there," said Curtis, 55. "It's the closest thing I can think of to slave labor."

The truth is more complicated, and the global economy is full of twists and turns.

The City Of Dalingshan, China

Exports:Dalingshan is known as China's No. 1 furniture exporter

Two years ago, NPR tracked down some of the jobs that were lost in Lenoir and other North Carolina towns to Dalingshan, a South China industrial city with factories as far as the eye can see. One of the biggest operations is owned by Lacquer Craft, an Asian furniture giant.

In early 2008, Lacquer Craft was home to 4,000 workers and built furniture for many well-known U.S. brands, including Broyhill, where Curtis had worked.

Among Lacquer Craft's employees was 25-year-old Zhao Xia, who prepared furniture for painting before it was shipped to the United States.

Toward the end of Curtis' career, he made more than $15 an hour.

In 2008, Zhao earned less than 70 cents an hour, often working until midnight with just two days off a month.

But Zhao didn't consider herself a slave; she said she was fortunate. Before working in the factory, she farmed a tiny plot of land in Southwest China's Sichuan province.

"We planted rice paddies, wheat and corn," Zhao said. "We ate what we planted. We never made any money off it."

In Dalingshan, Zhao shared an apartment down the street from the factory's back gates with her husband. They slept on a box spring next to a small TV and a DVD player. Though squalid by American standards, the conditions were a step up from Sichuan, Zhao said.

"In a factory, you don't have to work in the sun — that's the best thing," Zhao said. "I prefer working here. At least I get paid. At home, nobody paid me."

Lacquer Craft is a cavernous complex that resembles a series of aircraft hangars. During a tour, Hawk Chiu, a factory executive, pointed out a three-story stack of lumber. It was white poplar from the U.S.-Canadian border. Chiu said the company imports wood from North America, cuts it into furniture and then ships it back across the Pacific. 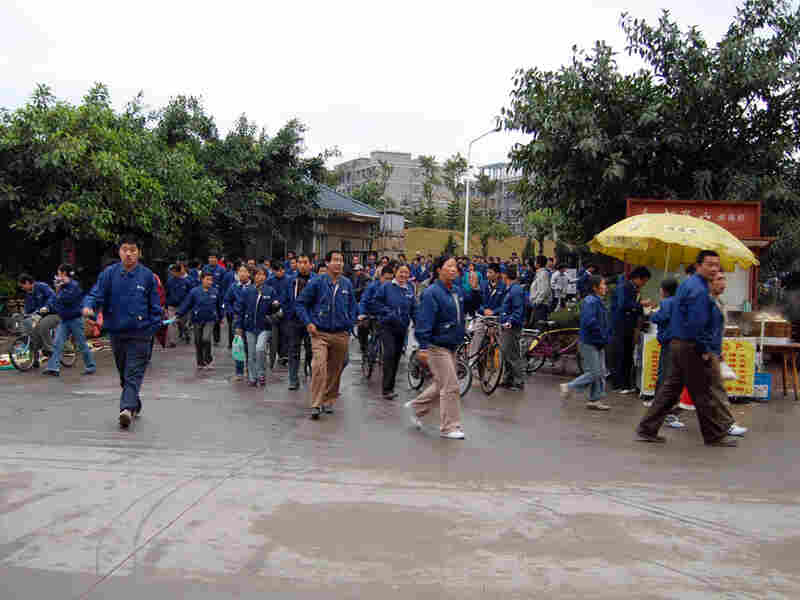 Workers pour out of the back gate of the Lacquer Craft furniture factory in Dalingshan, China, during a shift change. Some of the furniture jobs lost in Caldwell County, N.C., this decade ended up here at Lacquer Craft. Frank Langfitt/NPR hide caption 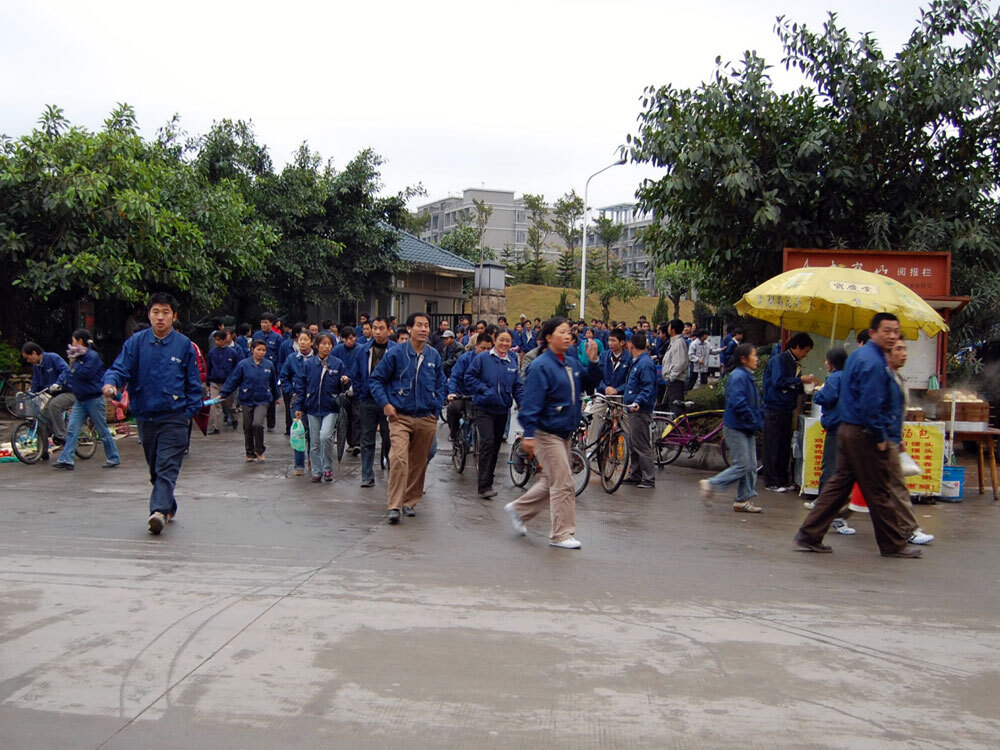 Workers pour out of the back gate of the Lacquer Craft furniture factory in Dalingshan, China, during a shift change. Some of the furniture jobs lost in Caldwell County, N.C., this decade ended up here at Lacquer Craft.

Lacquer Craft can afford to source wood from such a distance because of America's yawning trade gap with China.

"There are a lot of exports to America, but some containers come back empty," Chiu said. "So, the price to ship things back in them is relatively cheap."

Laborers Have The Upper Hand

In early 2008, South China was suffering from a surprise labor shortage. Instead of begging for jobs — as they once did — furniture workers could pick and choose.

One 24-year-old worker, Chen Hong, earned $330 a month and bragged that he could command that wage anywhere.

"If we go out looking for work, we can certainly find jobs like this and get them at the same salary," Chen said. "We have a lot of friends asking us if we want to work in other factories."

"Now, being a migrant worker is pretty easy — being a boss is much harder," Kang said. "I would prefer to be a migrant worker. Their job security is better than it used to be."

But conditions change fast in the global economy, and even as Kang spoke, that security was fading.

Impact Of The Great Recession

Back in America, housing prices were falling, and so were furniture sales. Becky Song was a manager at Creation Furniture, a small company in Dalingshan. By January 2008, Creation had closed two factories and Song could see the crisis ahead.

The amount of furniture imported to the U.S. has grown over the last decade with China leading the way.

"If there is a recession in the United States, of course, Americans' purchasing power will decline and there will be fewer orders," Song said. "Factories won't be able to survive, and they'll have to lay off people. Probably many factories will have to close."

Creation Furniture went bankrupt late last year, according to a security guard who was manning the locked gates of the empty factory when NPR visited last month.

During the recession, Lacquer Craft, the firm that makes furniture for Broyhill and other North Carolina companies, cut its employment rolls by 1,000, according to Chiu. He said that in Dalingshan alone, more than 100 plants had shut down in the past two years.

Albert Fan, another furniture factory manager at one of a handful of factories NPR visited, said up to 400,000 workers lost their jobs in the region and returned home to the provinces.

Zou Zuoxin is one of the survivors. He said his factory, which made component parts for Lacquer Craft, cut hours until half its workers left.

"They never tell you directly that we want to fire you," Zou said, taking a break from watching a movie on a giant-screen TV one evening in the city square. "They would just tell you that you can still work here, but we have very few orders and very little work. Many people can't bear it, then they would just quit."

Zou, in his early 50s, said for people his age, unemployment is just a matter of time.

"I will lose my job sooner or later," Zou said. "It's not possible to have a career here. You can't have a job for life."

Chiu of Lacquer Craft said he learned a powerful lesson from the recession: Don't depend on the American consumer. Chiu is now focusing more on the Chinese market but said it will take time to develop.

"Chinese people have a bad habit," Zou said facetiously. "They're comparatively frugal. They can use one piece of furniture for 10 or 20 years." He added, "Americans are much more wasteful. We prefer the way Americans consume."

In the meantime, Chiu says, conditions are improving, and his factories and others in Dalingshan will survive. In recent months, orders from the U.S. have been picking up and, once again, Chiu and his factory are looking to hire.