Accessibility links
Saddam's Past with U.S. Has Implications for Iraq Joost Hiltermann's new book A Poisonous Affair: America, Iraq, and the Gassing of Halabja, re-examines Saddam Hussein's use of chemical weapons against Iranian soldiers and Iraqi Kurds during the Iran-Iraq war. The book also examines how Western powers, including the Reagan administration, aided and abetted Saddam.

Listen
Saddam's Past with U.S. Has Implications for Iraq

Joost Hiltermann's new book A Poisonous Affair: America, Iraq, and the Gassing of Halabja, re-examines Saddam Hussein's use of chemical weapons against Iranian soldiers and Iraqi Kurds during the Iran-Iraq war. The book also examines how Western powers, including the Reagan administration, aided and abetted Saddam.

Now, let's revisit an old story about U.S. relations with an unsavory government. A story with implications for the future. In the run-up to the Iraq war, President Bush frequently cited Saddam Hussein's chemical attacks on his own people as a reason to fear the Iraqi dictator could strike again with weapons of mass destruction.

A new book examines the horror of the chemical weapons campaign Saddam waged during the Iran-Iraq war in the 1980s. It takes a close-up look at U.S. involvement with Saddam at that time and the legacy of this involvement.

The book's author is Joost Hiltermann, a veteran Middle East watcher with the International Crisis Group and a frequent guest here on NPR. Hiltermann's new book is called "A Poisonous Affair: America, Iraq, and the Gassing of Halabja." I spoke with him last week.

Joost Hiltermann, you say, where were you on March 16th and where was I? Memory fails where conscience demands it.

Dr. JOOST HILTERMAN (Middle East Project Director, International Crisis Group; Author, "A Poisonous Affair: America, Iraq, and the Gassing of Halabja"): Well, the thing is it is such a huge event to have an entire town attacked with chemical weapons. I mean, there is no precedent for it in history. And so why weren't we more conscious of it at the time? And, frankly, I do not remember what I knew at the time and now my memory, you know, things get all blurred and maybe there was some kind of recognition at the time. But I do know going back to the newspapers of the time that there was clearly some consciousness that something major have happened. But it didn't last. That moment of recognition passed very quickly.

LYDEN: But the pictures were so stunning when they came out. Three thousand people dead, bodies curled up in the streets, people gassed in their homes and their trucks, men curling around infants. Was there an international recoiling?

Dr. HILTERMAN: Well, there was and the pictures have remained until now. What has changed was the awareness of who was responsible because clearly, at first, everybody thought and knew deep down that it was Iraq that had done it. And, in fact, Iraq did do it. But as soon - another narrative appeared that suggested that in fact Iran was at least partially to blame for the gassing of the Halabjans.

LYDEN: In fact, you've got an example here. You say, that almost immediately, a critical piece of disinformation entered the international coverage of Halabja and on March the 23rd - reminding that the attack occurred on the 16th - a U.S. State Department official, Charles Redman(ph) says the Iranians might have used chemical weapons there. And that night on "Nightline," Ted Koppel says there's some ambiguity about who's behind this attack and indeed it has framed the debate almost until now.

Dr. HILTERMAN: That's right. That story originated in the Defense Intelligence Agency, the military intelligence branch of the Pentagon. And it was really designed to take the pressure off of Iraq.

LYDEN: Why do we want to take the pressure off Iraq? Obviously, there was a great fear of Iran after the 1979 Revolution.

Dr. HILTERMAN: Well, that was one thing and the other thing was the hostage crisis in the beginning of the 1980s. There was a lot of enemies against Iran. And so when Iraq invaded Iran in 1980, it didn't take very long for the Reagan administration to make up its mind to put its support largely behind Iraq. This was the Iraq tilt. And as part of this, the Reagan administration closed its eyes to some of the worst activities of the Iraqi regime, both internally and its use of chemical weapons in the Iraq-Iran war.

LYDEN: Remind us of other ways in which America showed its support. Secretary of State George Shultz sent very conflicting signals to the Iraqis. Don Rumsfeld makes his visit to Baghdad in 1983. And this is basically to shore up Saddam Hussein's confidence.

Dr. HILTERMAN: Yeah. This was just at the time when the Reagan administration had become aware of which intelligence agencies that Iraq has started using chemical weapons because the first recorded and really seriously documented use of mustard gas was in July, August of 1983.

LYDEN: I mean, this is the first time that chemical weapons have been used this greatly since World War I.

Dr. HILTERMAN: That's true. This was the first time that we had a situation roughly similar to the First World War where you have a trench warfare and the use of gas of enemy forces.

LYDEN: And every time Iran makes a major incursion, which it did almost annually in the spring, into Iraqi territory, these chemical weapons would be used nearly everyday.

Dr. HILTERMAN: The Iranians would send these young - so-called volunteers across minefields where many were blown up, of course, many of these were teenagers, towards the Iraqi positions. And the Iraqis would be sitting there, with the machine guns firing, firing, firing, killing a lot of these guys but there would be more coming, and these machine guns would just heat up and jam. And so the Iraqis were really afraid of being overwhelmed by this human wave assaults and the only weapon they could think of that could effectively counter them was gas.

LYDEN: Did Iraq feel that it could literally get away with murder?

Dr. HILTERMAN: Well, I think so because each time it was using a new chemical agent and it was starting to gas civilians as well. Nothing happened, there was silence. And so it knew it could go ahead. And this was, of course, benefited it tremendously especially toward the end of the war when it was going for advantage.

LYDEN: Getting on towards near the end of the war, how did the Iran-Contra Affair encourage Saddam Hussein?

Dr. HILTERMAN: Well, the Iran Contra Affair was a huge slap in the face of the Iraqis because they had already suspected but nobody had the evidence that the United States was, in fact, arming its archenemy and was giving it very critical weapon systems.

And so when this was uncovered and became a big public scandal, the State Department and the other - you know, and the United States government (unintelligible), went out of their way to increase the tilt toward Iraq and so credit guarantees went up and the intelligent sharing went up. And the U.S. presence through the defense attache and the military intelligence in Iraq was ramped up. And so in the end, we get a very close, fairly intimate relationship, especially on the intelligence level, between the United States and Iraq.

LYNDEN: Did the American intelligence agencies actually share satellite photos or data about where Iranian positions where in northern Iraq or along the border?

Dr. HILTERMAN: Well, along the southern front in particular, they did. And so, this helped the Iraqis hugely because - especially in terms of directing the chemical fire, they knew now where the Iranian troops were. And they used to…

ELLIOTT: But certainly, American officials, at that point, knew there's no question that Iraq was using this on the Iranians?

Dr. HILTERMAN: Oh, U.S. intelligence documents make it abundantly clear that there was full knowledge of this from, at least, the summer of 1983 on.

ELLIOTT: I want to talk to you now about the implications for Iraq and for Iran today. Let's start with the Kurds. You've been to Kurdistan and Kirkuk many times. The campaign, which is called Anfal, meaning the spoils, that cleared and depopulated northern Iraq and killed tens of thousands of people - this is such a live memory.

Dr. HILTERMAN: It's a traumatic experience to the Kurds. Both the Anfal campaign and the Halabja attack, which coincided in 1988, until now, this trauma has shaped the Kurdish posture in modern Iraq to the extent that they are trying to use the current situation to maximize their future possibility of succeeding from Iraq. And they do this by maximizing the territory that falls under their control and by maximizing the powers they have within the territory. They know they will never ever going to be able to trust another Iraqi government - do not do the same thing to them as happened in 1988.

ELLIOTT: Finally, Iran. You write that its memory of the chemical weapons that Saddam used in both Iraqi Kurdistan and Iran are very much alive. There was a fear at one point that Tehran itself might be gassed. Iranians see the U.S. as complicit, of course, in the chemical campaign. And you suggest that this figures into their drive for nuclear weapons.

Dr. HILTERMAN: Well, I think it's directly related because the Iranians, of course, had the nuclear program under the shah. Khomeini stopped that. But then later, this was resumed because of the direct experience Iran had in the war with Iraq, to be totally vulnerable to chemical weapons attacks with no similar response capability and realizing that the Iraqis where also starting to develop biological and nuclear weapons.

And so they started to develop their own programs. Plus, they learned that you could not rely on the international community to abide by its own international treaties like the 1925 Geneva protocol against the use of chemical weapons. The Iranians kept saying to the United Nations, this is your international convention. Why do you not observe it? Why is Iraq allowed to use chemical weapons against us? So now, they signed all these various treaties themselves but they know that it is just ink on paper.

Joost, thanks very much for coming in. 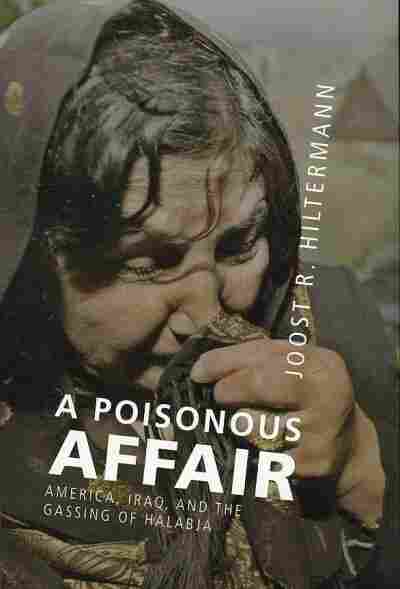 America, Iraq and the Gassing of Halabja