Accessibility links
Couple Remember War Dead with Yard Display In an upper middle-class suburb of Kansas City, a couple displays one small American flag on their lawn for every American servicemember who has died in Iraq. They began the practice late on the night of July 4, and they have updated the count every Sunday morning since. 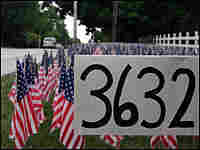 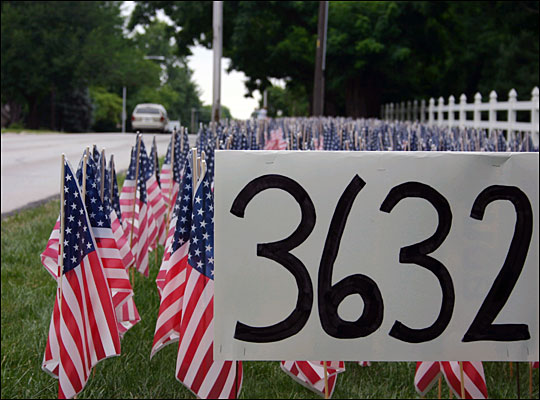 Ann and Don Bender's front yard is decorated with more than 3,600 flags to mark the number of U.S. military casualties in Iraq.

Sunday morning in Kansas City, Mo., Ann and Don Bender pushed 19 small American flags into the grass in front of their house. The new flags joined more than 3,600 already on their lawn to mark the number of U.S. military casualties in Iraq.

The display is in an affluent section of a reserved Midwestern city where political yard signs are rare.

The flags are arranged in a long strip 10 flags wide between the Bender's white fence and the road.

Don Bender has a huge yard but he's almost run out of space.

"We'll have to talk to our neighbor to see if we can expand into his yard if we have to," he says.

As Don adds more flags, his wife Ann is updating the pair of simple black and white signs that bookend the rows. The new total is 3,632.

Ann and Don Bender, who both grew up in Kansas City, were hesitant about putting out the display. Ann notes that this is the Midwest where people usually don't like to call attention to themselves. And they've never done something like this before. But she says their frustration with the war in Iraq finally overcame their inhibitions.

"Our children hear us talk about it, express our unhappiness with what's going on," Ann says. "We finally thought they need to see us doing something, take a stand in some way."

The Benders originally put the flags out in the middle of the night on July 3.

They planned to take the display down after the Fourth of July, but they got so much positive response that they've decided to leave it up.

Veterans have stopped by to thank them. People have left notes.

Ann has found it surprisingly moving for her, too. One night, a storm knocked many of the flags over. She and Don went out to straighten them.

"It was my first exposure to starting at one end and working our way down. And I just became so overcome by 'every flag's got to be straight.' And every one of these is somebody who's died over there and their mothers would want their flags standing up straight."

The Benders aren't calling for an immediate pullout of U.S. troops.

Neither of them claims to have the answer for the war in Iraq. They say they simply don't know what the solution is, but in the meantime, they hope people who drive past their house each day remember how many American soldiers have died in the war.