Accessibility links
Movie Review - 'Avatar' - Big-Picture Visions, Stirringly Realized You've seen the stories about the special-effects — but you still may not be prepared for the shock-and-awe tactics of Avatar. Critic Kenneth Turan says James Cameron's new sci-fi epic traffics in a sense of wonder that's been missing from the moviegoing experience for far too long. (Recommended) 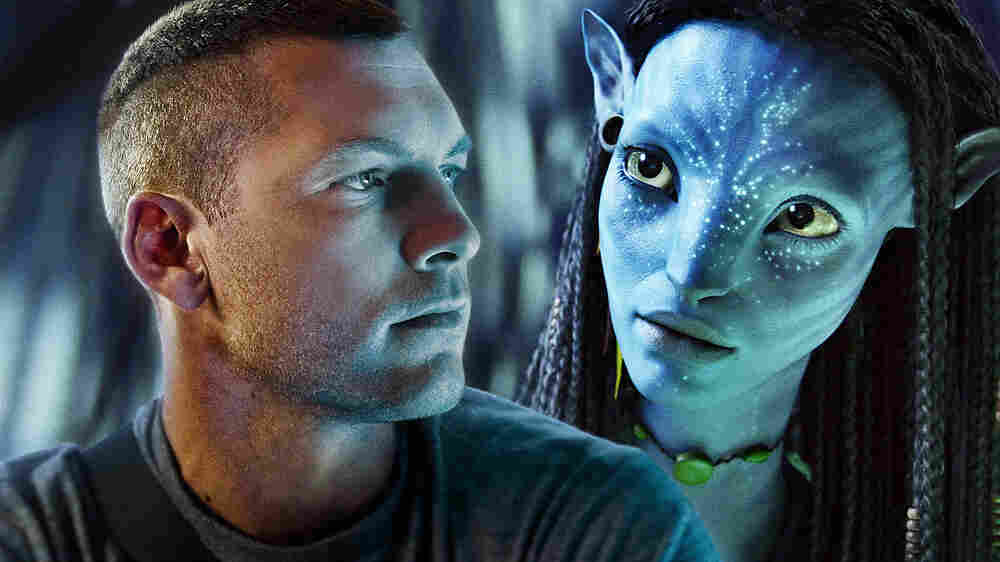 Behind Enemy Lines: With Earth in trouble, humans are off to Pandora — and the native Na'vi are ready to fight for their home. Genetically hybridized and assigned to infiltrate them, combat veteran Jake Sully (Sam Worthington, left) goes native himself when he meets Neytiri (Zoe Saldana). WETA/20th Century Fox hide caption

You've never experienced anything like Avatar, and neither has anyone else. Its shock-and-awe tactics restore a sense of wonder to the moviegoing experience that has been missing for far too long.

The year is 2154, and Planet Earth is in big trouble — big enough that people are going all the way to Pandora, six light-years away. The Na'vi — blue-skinned, 10-foot (computer-generated) creatures who live on the exotic moon — are not happy about that, which is why the speech the head of human security gives to his forces sounds less like a warning than a death sentence.

Listening to that speech is partially paralyzed combat veteran Jake Sully. He's come to Pandora to become the human mind inside an avatar — a genetically engineered hybrid between humans and the Na'vi. But once hothead Jake crosses the security barrier from the heavily protected base to enter Pandora proper, he can't help but be wowed by the vividness of the fantastical creatures there — flying dragons, anvil-headed rhinos and such.

You'll be wowed too: The creative intensity on display in Avatar is so potent, we're barely troubled by the same weakness for flat dialogue and characterization that put such a dent in Titanic. Those qualities are here, no mistake about that, but because of the nature of the story, they don't matter as much.

That's because to see Avatar is to feel like you understand filmmaking in three dimensions for the first time. In Cameron's hands, 3-D is no forced gimmick. It's a way to create an alternate reality and insert us so seamlessly into it that we feel like we've actually been there.

Avatar may be the most expensive and accomplished Saturday matinee movie ever made. But if spectacle and adventure are reasons you go to the movies, Avatar is something you won't want to miss. (Recommended)