Accessibility links
Interview: 'Avatar' Director James Cameron, A King With A Soft Touch - And His Own New World The Avatar director says you shouldn't believe those stories about what a tyrant he is on set. And although he created his very own alien world for his first film since the megahit Titanic, Cameron insists that finding emotional honesty in an FX extravaganza isn't as challenging as you might think. 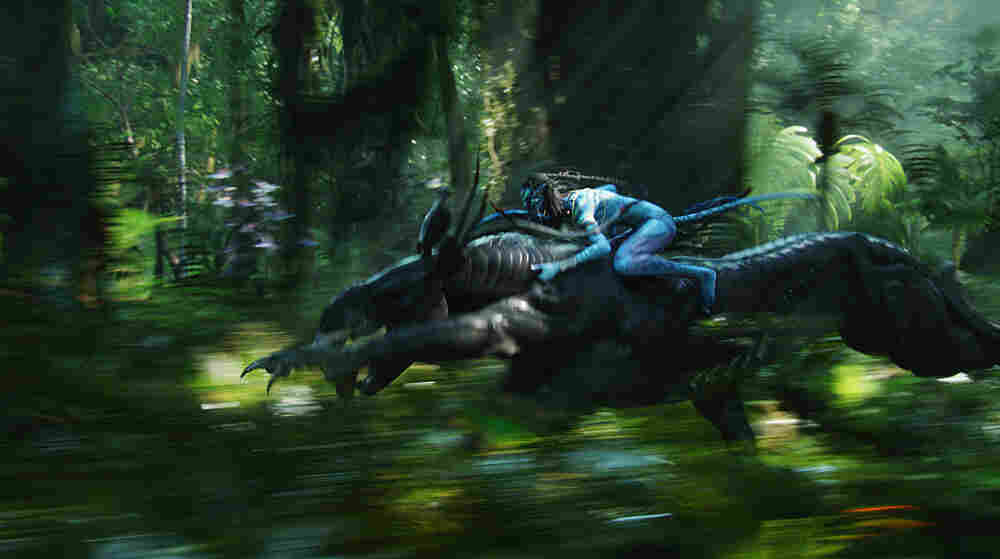 Fierce Creatures: A Na'vi warrior races into battle on a thanator — one of dozens of plants and animals created, and painstakingly cataloged, by the creators of the new sci-fi epic Avatar. WETA hide caption 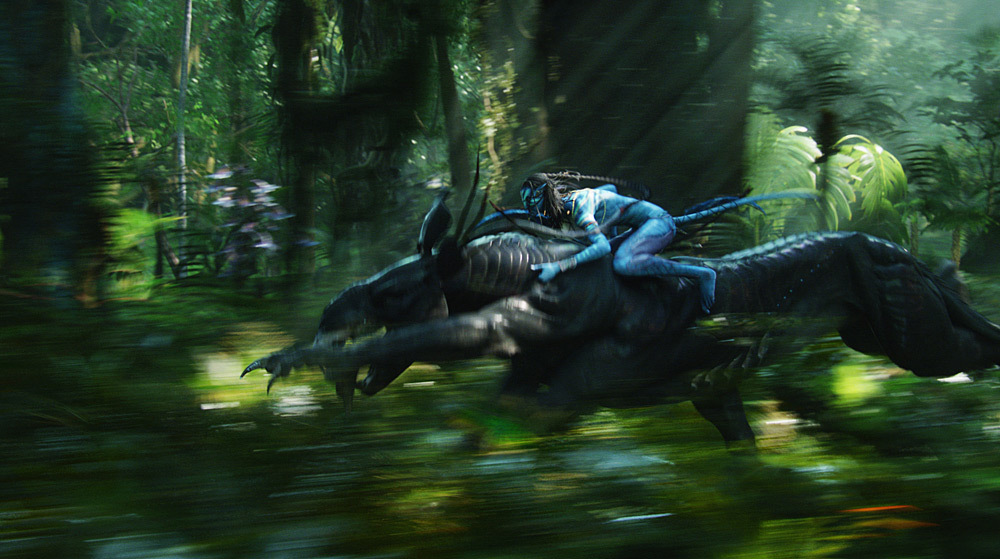 Fierce Creatures: A Na'vi warrior races into battle on a thanator — one of dozens of plants and animals created, and painstakingly cataloged, by the creators of the new sci-fi epic Avatar.

The alien world of Avatar germinated in the brain of writer-director James Cameron about 15 years ago. Now it has finally come to the screen, in eye-popping 3-D. The film's setting: the bioluminescent jungles of the moon Pandora, with its indigenous population — the blue, 10-foot-tall Na'vi. 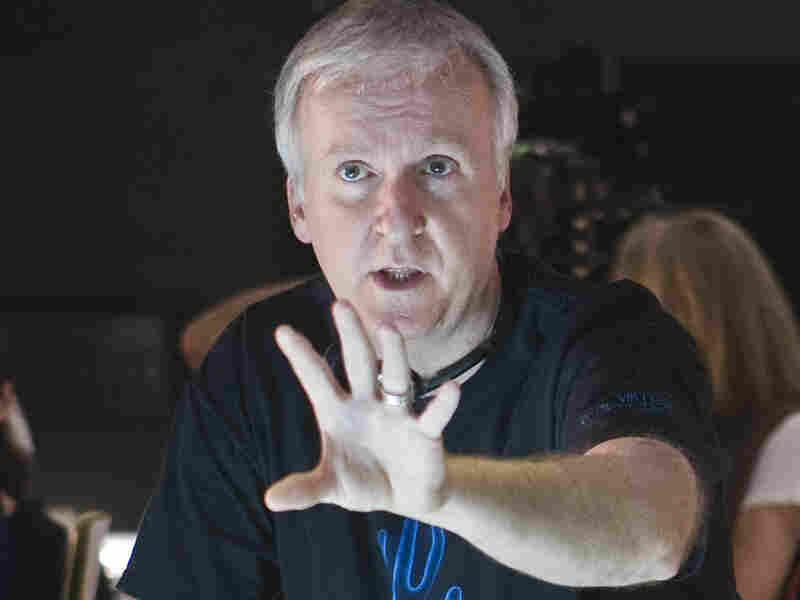 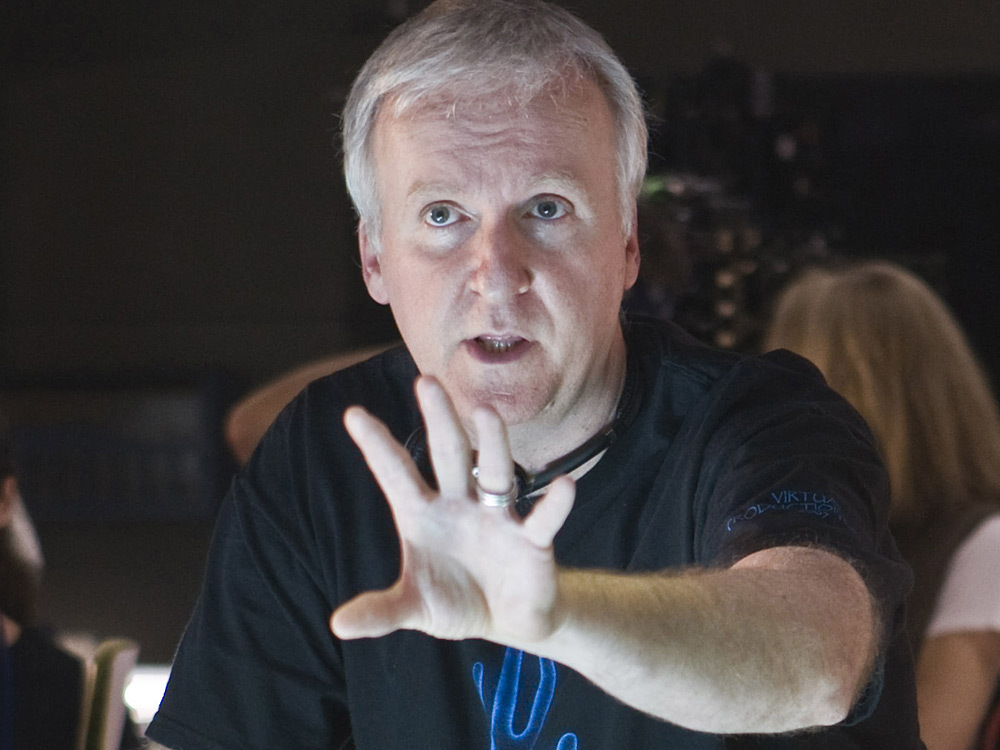 Melissa Block asked James Cameron whether he'd thought about returning to earlier films like Terminator and Aliens, using new technologies to tweak them — as, say, George Lucas did in reissues of the early Star Wars films. Cameron's reply:

'There's No Point In Going Back'

Avatar is a live-action movie, but it couldn't have been made without revolutionary digital technologies. Among other things, Cameron's team developed what they call "head rig" cameras for the actors, to record nuances of facial expression that were later digitally transformed.

And Cameron shot the film on a vast gray performance-capture stage called The Volume.

"And within that is a smaller space that's lined out on the floor, which defines the perimeter of The Volume with a red line. When you step over that red line, you're stepping into a space that's scanned by 120 or 130 cameras that are overhead on a pipe grid. And they photograph these markers that are on the actors' bodies."

Within milliseconds, Cameron explains, what those cameras capture gets composited into a computer-generated character. That character gets fed through to a program called MotionBuilder, which "puts the character into an environment" — inserts him or her, for instance, into the jungles of Pandora.

"So in a sense," Cameron says, "you're creating a kind of live video game of the performance of the scene."

Chasing The Feel Of Real, When Real Lives Mostly In Your Head

Much of Cameron's attention, obviously, was focused on the technologies that made Avatar possible. But the director also took great pains to make the virtual action look, and even feel, real.

When actress Zoe Saldana, who plays a Na'vi princess named Neytiri, filmed a scene in which she jumps on the back of a flying jungle creature called a banshee, another director might have had her simply leap aboard a pommel horse or a polo-player's practice pony.

Not the famously perfectionist Cameron.

"Believe it or not, she was actually jumping onto the back of a really big stunt guy — like a 280-pound linebacker stunt guy," says the director, laughing. "The object there was to have her land onto an organically moving platform. ... And he actually had the riding tack on with stirrups and everything. It was pretty funny to watch."

For the flying scene that followed, Saldana sat astride a different rig — a large fiberglass "banshee flying rig," mounted on a double-axis gimbal and manipulated by stunt men.

"The beauty of the performance-capture system is the system only sees what you want it to see," notes Cameron. "So you can have 20 people standing around the actor, and the system just doesn't see them. So what I see in my virtual camera is just Zoe's character riding on a banshee, flying through the floating mountains or wherever they are."

The Effects-Film Fallacy, And Other Hollywood Hobbyhorses

Critics skeptical of big special-effects films tend to assume that green-screen rigs and motion-capture markers and all the rest get in the way of honest emotional performances. How, they ask, can a director make a bare gray warehouse seem like a lush interstellar jungle, when there are few visual cues about the world the director has in his head? 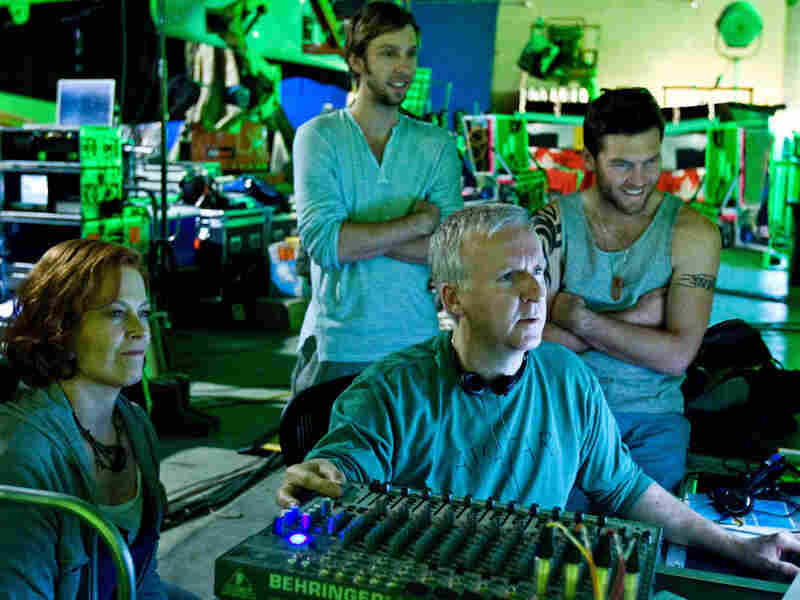 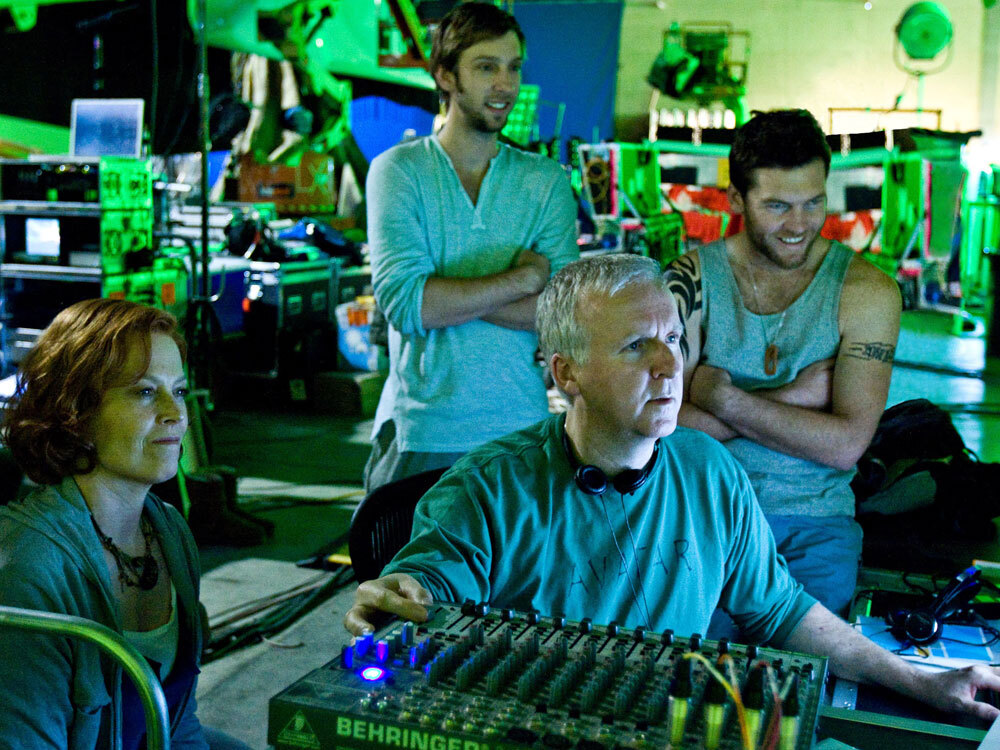 "My challenge as director is to make it as real as possible for them," Cameron acknowledges. "And their challenge as an actor is to imbue it with a sense of emotional veracity."

Cameron says he rehearses the scenes with the actors just as he would for any other film, finding the emotional beats and analyzing the relationships between the characters.

"If it's a big dramatic confrontation," he says, "the best thing to do is just let them go at it and act off each other."

And it is acting, after all. Shakespearean performers rehearse in windowless basements, not on finished sets. And even an actor on a typical live-action movie drama isn't exactly performing in a realistic setting.

"Even on a live-action set, they look up and they mostly see some grip standing on a ladder, and a bunch of bright lights and stands and flags," Cameron says. "By the time a shot is lit, you can barely see the set, standing where the actors are."

Actors, he says, just don't rely on a scene's setting for their emotional cues.

"What they feed from, in terms of inspiring their performance moment, is the other actors," Cameron says. And so ironically enough, the singular circumstances of the Avatar shoot produced what the director calls "really pure and focused work" from his cast.

Cameron did want his actors to have some sense of their characters' surroundings, of course, so before he brought them to the soundstage, he had them spend three days in a Hawaiian rain forest.

"We went there with the express purpose of doing a kind of sense-memory exercise," he says.

The actors spent time rehearsing their scenes, running — in costume — through the jungle and putting on quite a show for the tourists who crossed their paths.

"We surprised a few hikers," says Cameron, laughing. "Sam [Worthington] running around in loincloth with a bow and arrow."

The Botanist, The Astrophysicist, And The Rain Forest Run

Avatar is an imagined world, of course. But it's a pretty thoroughly imagined world: Cameron indulged himself — and helped cement his own sense of Pandoran reality — by naming everything he put onscreen. Every plant, every creature, in Latin and in the Na'vi language that Cameron commissioned for the film.

"That's how geeky this is," Cameron says. "Any novelist, particularly science-fiction novelists like J.R.R Tolkien, would create the world, create the language of the world, like Elvish ... I'd always wanted to do that."

Which explains the ethnomusicologist and the botanist and the astrophysicist who joined Cameron in "a three- or four-day session" to come up with the naming conventions in his alien universe.

"I basically surrounded myself with geeks who fed off the same kind of sense of fun," he says.

And though Cameron expresses a fondness for all of his creations, he says the flying banshees might just be his favorite. "The one I had the most direct design input on was the thanator. ... I designed its head and upper body."

Cameron's thanator, it turns out, has a Na'vi name that means "dry-mouthed bringer of fear." The irony isn't lost on Hollywood-watchers, among whom Cameron has become known over the years as a demanding, even authoritarian director.

The legend, he acknowledges, is "this fire-breathing kind of persona" that he insists "was mostly created by journalists."

"You know, in reality, on the set, I'm pretty crisp, pretty focused," Cameron says. "And I don't think I necessarily inspire fear. What I like to inspire is people bringing their best game."