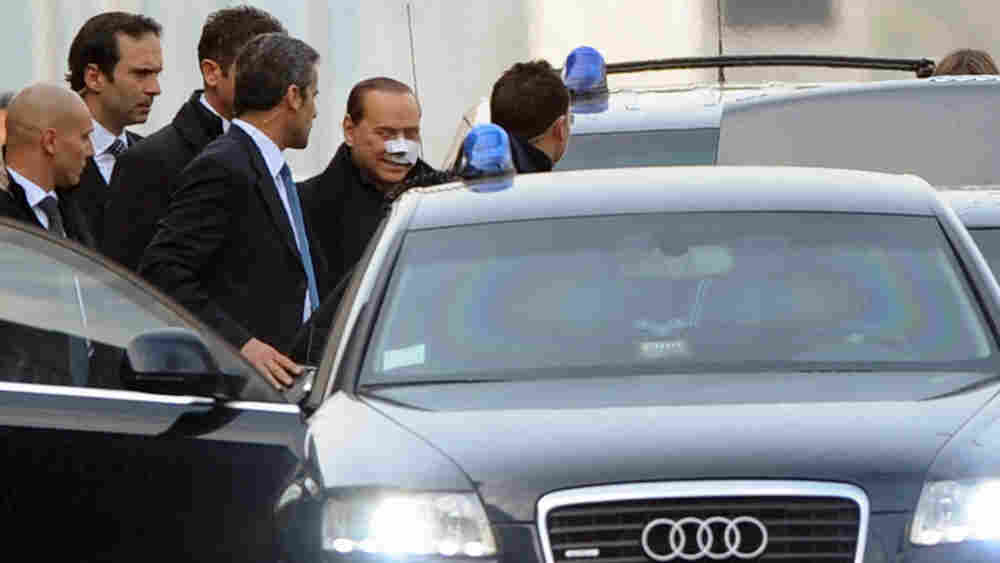 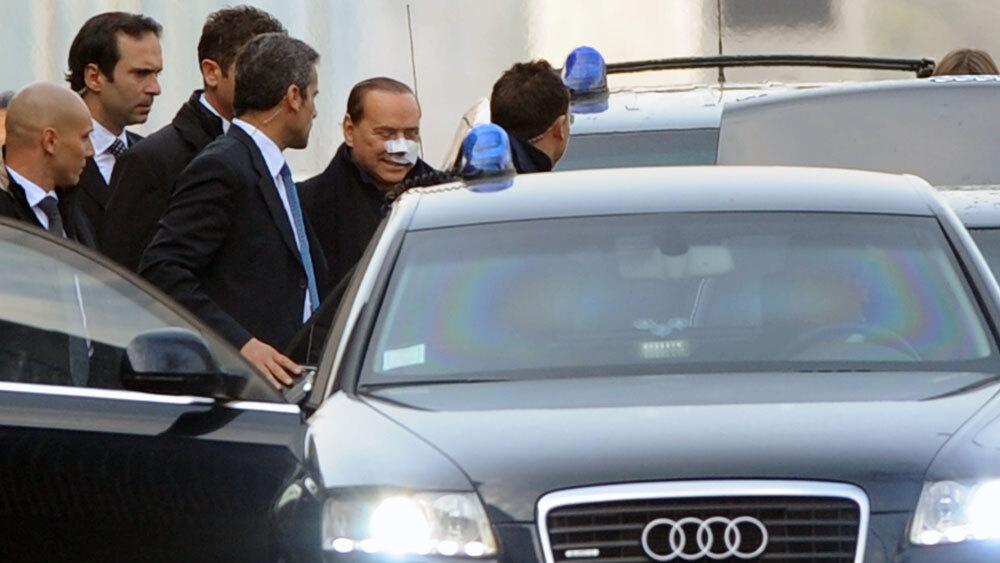 Berlusconi is at his villa near Milan nursing injuries from Sunday's attack in Milan, when a man threw a souvenir statuette into Berlusconi's face. The man, described by the authorities as having a history of mental illness, remains in jail.

For years we've witnessed a lynching campaign against Berlusconi, with unbelievable insults.

Berlusconi's aides and political supporters are blaming the independent media for inciting the attack, saying they, as well as the magistrates currently investigating the prime minister, have created "a climate of hatred."

A bandaged and grim Berlusconi left a Milan hospital on Thursday. In a statement he said, "I will go on with more strength and determination than before."

Those words comforted a group of his supporters in Milan, for whom the 73-year-old political leader and media magnate has become a figure of adoration. "Thank God Silvio exists," says one elderly man. "Berlusconi is a god," says another, adding that "those who oppose him are all communists."

"For years we've witnessed a lynching campaign against Berlusconi, with unbelievable insults. They're using violence in words and actions to try to overthrow him," Belpietro says.

In a heated parliamentary debate, Fabrizio Cicchitto, one of the leaders of Berlusconi's PDL party, went further, naming names, including a reporter who recently republished a book about Berlusconi's alleged links with the Mafia.

"This campaign was waged by the newspapers La Repubblica and Il Fatto, by a certain TV talk show and by a 'terrorist' journalist named Marco Travaglio, as well as by some magistrates — investigating links between the Mafia and politicians — who demonize Berlusconi," Cicchitto claimed.

We're witnessing the mortification of Parliament, intolerance for the opposition, the intermingling of public and private and of business and politics.

Cicchitto's incendiary remarks were echoed by media outlets owned by Berlusconi. They accused independent journalists of being the moral instigators of a new season of the domestic terrorism, similar to the politically motivated violence that plagued Italy in the 1970s.

But the opposition says it is Berlusconi and his ministers who bear much of the responsibility for what they call an uncivil political climate.

They point to Berlusconi's dismissal of Parliament as "useless." They also cite vulgar epithets Berlusconi has used against investigating magistrates, the supreme court and the chief of state for rejecting the prime minister's efforts to pass custom-made laws that would spare him from prosecution.

Despite opposition criticism, the government is vowing to go ahead with new legislation that would give the prime minister immunity from prosecution while in office. If passed, two current corruption trials against Berlusconi would be suspended.

In the wake of the attack, the government also plans to restrict public gatherings and introduce stricter controls on freedom of speech. It has announced a bill that would allow magistrates to shut down Web sites that instigate violence.

"We're witnessing the mortification of Parliament, intolerance for the opposition, the intermingling of public and private and of business and politics. These are all signs of a subversive project," Orlando says.

The Internet is one of the few sources of news and information not subject to Berlusconi's control. The media mogul owns three TV networks, magazines, newspapers, publishing houses and Italy's biggest advertising company. And as government chief, he controls the three state-run TV networks.

But many Italians now prefer cyberspace.

In just 15 months, the Italian version of Facebook has reached 12 million users — 20 percent of the population. A large anti-Berlusconi rally two weeks ago was organized exclusively through the Internet.