Accessibility links
Let The Tiger Woods Booking Wars Begin Tiger Woods will have to come out of seclusion at some point, and when he finally does, his first TV interview will be a major get. NPR media correspondent David Folkenflik describes the frenzied angling among producers and anchors desperate to get Tiger on their network. 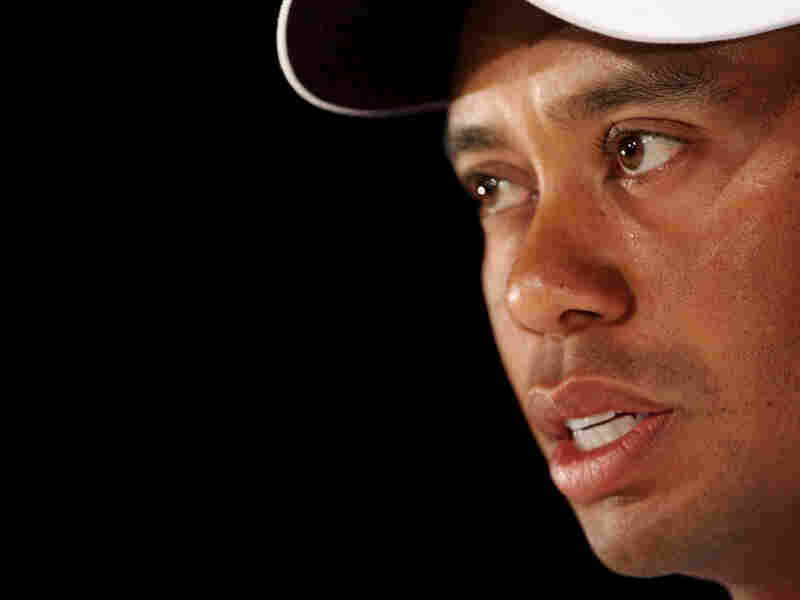 In a message posted on his Web site on Dec. 11, Tiger Woods announced that he would be taking an "indefinite break" from golf. "I need to focus my attention on being a better husband, father and person," he wrote. Woods is shown above speaking to the press after the Australian Masters in November. Lucas Dawson/Getty Images hide caption 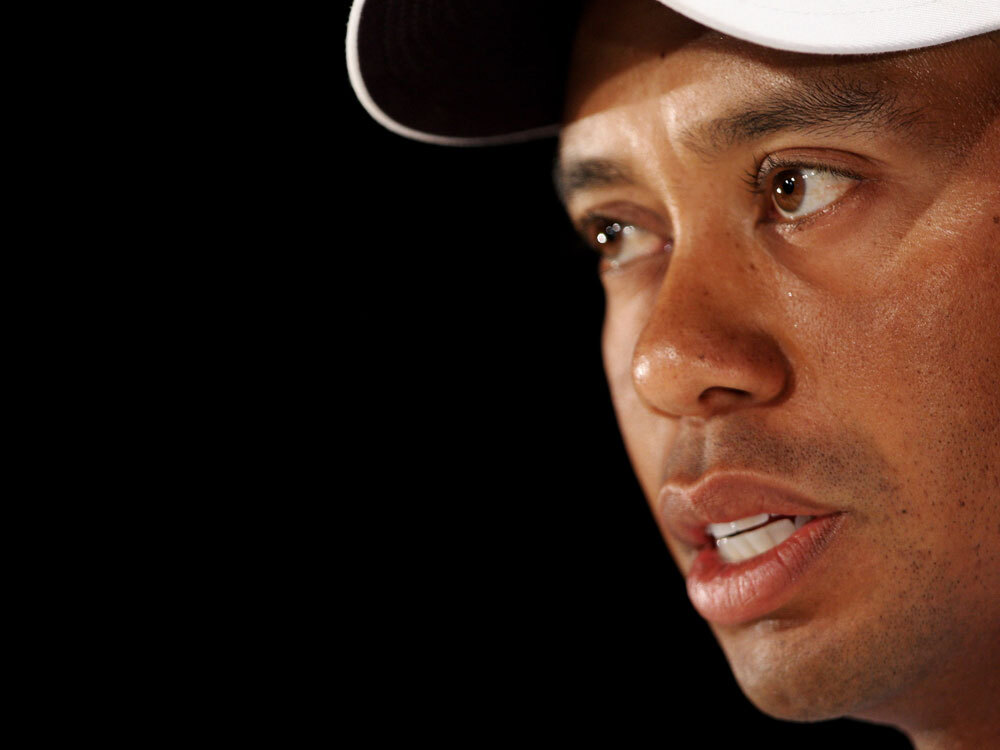 In a message posted on his Web site on Dec. 11, Tiger Woods announced that he would be taking an "indefinite break" from golf. "I need to focus my attention on being a better husband, father and person," he wrote. Woods is shown above speaking to the press after the Australian Masters in November.

Famous Celebrity Gets Of Recent Years

Michael Jackson, 1993: After avoiding interviews for 14 years, the reclusive Michael Jackson opens up to Oprah Winfrey and publicly discusses his abuse at the hands of his father and his lightened skin for the first time. He says his pale skin is the result of a rare skin disease.

Monica Lewinsky, 1999: Lewinsky's first interview is a two-hour special with Barbara Walters on ABC. She discusses her relationship with President Clinton and breaks down when talking about the publicity's effect on her parents.

Whitney Houston, 2002: After rumors of abuse, eating disorders and drug addiction, Houston sits down with Diane Sawyer and attempts to set the record straight — sort of. Houston denies having an eating disorder and admits to abusing substances such as marijuana and alcohol, but vehemently denies ever touching crack cocaine. She says, "First of all, let's get one thing straight: Crack is cheap. I make too much money to ever smoke crack! Let's get that straight, OK? We don't do crack — we don't do that. Crack is whack."

Sarah Palin, 2008: Palin has her first interview with a major news organization since accepting GOP presidential nominee John McCain's offer to be his running mate two weeks earlier. ABC's Charles Gibson, her interviewer, famously had to explain the Bush Doctrine to Palin when she didn't understand his question.

The confessional interview has become an almost unavoidable ritual for disgraced figures who seek to emerge once again in public.

And for several weeks, specialized television news producers have been fanning out across the country — even across the globe — in the effort to land the most highly sought-after interview in years: the scandal-tarred golf star Tiger Woods.

All the big shows are in the hunt. "They're figuring out who might be some intern's cousin's neighbor who caddies at the golf resort that Tiger Woods played at three years ago," says Jessica Stuart, a former producer for NBC's Today Show, The Oprah Winfrey Show and ABC News.

Since the first accusations surfaced of Woods' marital infidelity, ABC News has had a Swedish-speaking producer camped out in Sweden to seek out relatives of his wife, Elin Nordegren.

The country's most dominant and once most prominent athlete is now kept from view by an invisible army of security guards, agents and handlers.

But in media circles, it is a truism that at some point, somewhere, Woods will have to come out of seclusion and sit down for a televised interview. In network parlance, such interviews are called "gets," and they aren't scheduled, they're "booked."

"Booking is the game," says Today Show executive producer Jim Bell. "That is the game."

Not For The Faint Of Heart

It's more than just bragging rights. Exclusive interviews help generate publicity for big moneymaking shows like Today and ABC's Good Morning America, and The Oprah Winfrey Show, along with their celebrity hosts.

There are two kinds of "gets," which lead to two different kinds of inducements to encourage people to agree to the interviews. The first involves normal people who are caught up in extraordinary situations — say, the survivors of a natural disaster or the spouses of soldiers held captive abroad.

Producers will often go to great lengths to ingratiate themselves with those people and their families. Sometimes they end up staying in small towns for days and weeks, breaking bread, even babysitting children as they hope to convince their harried parents they will be treated with respect. Shows find that paying for a trip to tape the interview at their studios in Manhattan, with airfare and a room at a nice hotel, will often do the trick.

But the competition can be fierce. And it can hinge on unexpected personal quirks. Laurye Blackford was a top booker for Good Morning America when she was trying to win over Tillie Tooter, an 83-year-old grandmother who had survived in her car for three days after it went upside down into a snake-infested swamp. "She loved Good Morning America," Blackford recalls. "GMA thought that interview was locked up. Turns out that the doctor who saved her life was a Today Show viewer." ABC didn't get Tudor on its show.

Then there's the hunt for the famous, people with more clout and sophistication at handling the press. They can often call their own shots. Networks will still send junior producers out in the field with orders to get the job done. Meanwhile, the big-name anchors will send handwritten letters or fruit baskets containing notes of gentle blandishment.

Jessica Stuart now runs her own television production consulting company, Long Story Short, in Washington, D.C. But she says she learned the booking business wasn't for the fainthearted a decade ago — back when she worked for NBC's Today.

"During the Monica Lewinsky scandal, my competition had gotten the first interview with her attorney, [William] Ginsberg, and I physically threw myself in front of his car while it was moving to try to stop it to get an interview," Stuart says now, with a laugh. "I was 21 and really hungry. No one told me to do it. I just wanted that 'get.' "

And special interview subjects sometimes get special inducements. Networks say they never pay for interviews. But ABC gave Lewinsky the foreign broadcasting rights for the interview tapes. She made hundreds of thousands of dollars selling them to broadcasters outside the U.S.

Similarly, two years ago, the British Princes William and Harry sat down with Matt Lauer of the Today Show. NBC paid $2.5 million to the princes' foundation, named for their mother, the late Princess Diana. Officially, the payment gave the network the rights to broadcast a benefit concert in the United States. The Today Show's Jim Bell acknowledges the juxtaposition.

But he says that Woods has strong enough incentive at some point to do it without anyone having to strike special deals.

"I think there's a lot in it for him," Bell says. "He has to get past this, and part of that is answering questions people have."

"The media thinks they have a right to hear from him — that he has to come out to speak to them," says Blackford, who left TV in 2008 to be a media consultant for the McCain presidential campaign and specifically worked with Cindy McCain. "If I were advising him, I would say, 'You don't owe them anything.' But he has a bigger career."

The Today Show has been aggressive in broadcasting interviews with at least two women who have come forward to say they had extramarital affairs with Woods.

Blackford says she has a high regard for her former competitors at NBC. But she says she was surprised by its choices: "Wanting that big interview, you really have to weigh, is it worth talking to these women — and possibly losing Tiger because of that?"

Bell says that consideration never came up at the perennially top-rated Today.

"When you can simply say to people more people are going to watch you on our show, that's a very powerful card that wins a lot," Bell says. "In many cases, people will come to us, you know, before we've even reached out to them."

Bookers say you can tell a lot about Woods' intentions by whom he selects to talk to, assuming he does. If he submits to Oprah or the Today Show, he'll want to retain the women fans who have made up a surprisingly strong component of his audience. If he appears on ESPN or HBO's Real Sports, he'll be going after the hard-core sports fan.

News producers say they're told to do most anything short of lying to or bribing the people they want on the air. But Jessica Stuart says there are tougher things to do than chase celebrities: She once talked a married couple into appearing on The Oprah Winfrey Show to discuss their failure to have sex for more than a year.