Excerpt: 'The Financial Lives Of The Poets'

Excerpt: 'The Financial Lives Of The Poets' 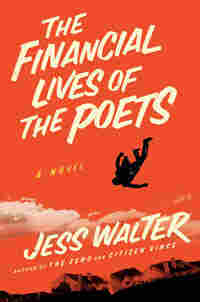 Here they are again -- the bent boys, baked
and buzzed boys, wasted, red-eyed,
dry-mouth
high boys, coursing narrow bright aisles
hunting food as fried as they are, twitchy
hands wadding bills they spill
on the counter, so pleased and so
proud, as if they're the very
inventors of stoned --

And behind the counter, the ever-patient Rahjiv makes half-lidded eye contact with me as he rings up another patchouli-foul giggler -- Reese's Pieces, Pic-6 Lotto, Red Bull and a cheddar-jack tacquito -- Rahjiv probably thinking: These kids, eh Matt -- or -- maybe not, because Rahjiv doesn't know my name and I don't wear a nametag. I'm just the middle-aged guy who leaves my gunmetal sedan running when I come in after midnight. When I can't sleep. And I've forgotten to get milk at a regular store. Milk for the kids' cereal. In the morning. Before school.

For years, recent immigrants like Rahjiv have been a political Rorschach: see turban, think terrorist and you're a Red 'Merican. Assume Indian neurosurgeon fluent in five languages, stuck serving morons at midnight for minimum wage, and you're Blue, like me. Of course I have no more proof that Rahjiv was a doctor in Delhi than some Texas trucker does that he's a bomber. Rahjiv may have jockeyed a 7/11 in India too for all we know -- so impeccable is he with change, effortlessly plastic-bagging Hostess Sno Balls and Little Debbies, Power Bars and Mountain Dews -- "No wait ... dude. Chocolate milk! And pork rinds" -- as yet another stoner reassesses the aisles -- "And ooh, ooh! Cool Ranch Doritos!"

Whenever I come in here, I invariably think of my own boys, at home asleep in their beds, still a few years from such trouble (or do they already dream of midnight at the Slurpee machine?).

Two tattooed white kids in silk sweat suits step to the line behind me and I tense a little, double-pat my wallet. The fat one juggles a half-rack of malt-liquor forties while his partner rolls away to yell in his cell, "Chulo! Don' do shit 'til we get there, yo." The door closes behind the cell-phoned gangbanger and I'm finally at the front of this line with my milk -- "Hey Rahjiv" -- when something goes terribly wrong at the soda fountain and the clerk and I turn together, drawn by a hydroponic squeal from deep inside the cave of a blue hoody. A pierced, lank-haired skater, board strapped to his back, has spilled his 72-ounce Sprite and now believes it is ... the funniest ... fucking ... thing ... in the world, and Rahjiv nods wearily at me again, no doubt wishing he were back cutting craniums at Mumbai General. He casually swings my jug past the scanner.

Then he hands me my milk. For the boys. For their cereal. In the morning.

I also think of my mother when I come in here. She was dying several years back and became obsessed with the terrorist attacks in New York. I hated that she should be so wracked with random anxieties as she wasted away, thumb jacking the morphine pump like it could save her life -- it couldn't -- her fear of dying manifested as a fear of things she had no reason to fear anymore: random crime, global warming ... and most of all, terrorists on airplanes."Matt?" she asked right before she died, "Do you think there will be another 7/11?" I thought about correcting her, but I just said, 'No, Mom, there won't be any more 7/11s."

"Nice slippers, yo," says the cell-phone banger when I come outside with my milk. He's twenty or so, in a sagging shark-colored tracksuit, black hair combed straight over his ears, elaborate tattoo rising out of his shirt at the base of his neck. And right out in the open, in front of this convenience store, he conveniently offers me a hit on a glass blunt, a little marijuana pipe shaped like a cigarette. I wave it off, but sort of wish I hadn't -- it's been at least fifteen years, but I didn't just spring from some relaxed-waisted suburbia with a Stoli martini in hand; I had my moments. In college they used to call me Weedeater because I devoured those Acapulco Gold joints, incense burning, black light on the walls, Pink Floyd thrumming down the dorm floor --

Oh, and they're not technically "slippers," but a casual loafer I got at the Nordstrom Rack with a gift certificate when I returned a cardigan that made me look like my grandfather. Of course I don't tell the stoned kid that, I just smile and say, "No thanks," but then I pause to get a closer look, instead of continuing on to my car. Maybe I'm just curious about this clever pipe or maybe it's the smell of the weed or maybe it's just this swiveling looseness I'm feeling, but I'm still in mid-pause when the fatter white gangster joins us, flat-brimmed ball cap worn sidesaddle, and now there are three of us standing in a little semicircle, as if waiting for a tee time.

"Hey," says the one with the neck tattoo and the blunt, "dude here can give us a ride to the party."

And I'm about to say I can't give them a ride because I've got to get home (and they look mildly dangerous) when fat-in-the-hat says, "Thanks, man," like he's surprised I'd be so cool and suddenly I want to be that cool. And then the fat kid looks down at my hands, and laughs.

"Damn, man. Why you buy your milk here? Shit's like nine dollars a gallon."

The clouds are low, like a drop ceiling suffused with light from the city. They slide silently overhead. And two dope-smoking bangers in tracksuits climb into my car. I read once that we can only fear what we're already afraid of; that our deepest fears are the memory of some earlier, unbearable fear. If that's true, then maybe it's a good thing my mother never lived to see another 7/11.

"You pro'ly did piss your pants, yo."

But this isn't true. With the winter floor mats, taxes and redundant two-year Service contract, the car set me back $31,256. And because of several other recent setbacks -- missed payments, ensuing penalties, house refi's, debt consolidations, various family crises and my untimely job loss -- after two years of payments I still somehow owe $31,000. On a car worth eighteen. This is my life now: set as far back as it will go.

"My brother boosted a Maxima once," says the kid from the backseat. "Or an Altima. I can't keep 'em straight."

The criminals' names are Skeet and Jamie. "Jamie?" I ask the kid in front.

"Yeah right, no shit, huh?" says Skeet from the backseat. "Dude's got like a chick's name, don't he?"

"Eat me, Skeet," Jamie says, and he offers me the blunt again and I surprise myself by taking it this time; I just want the smallest taste of that sweet smoke, or maybe I want to make sure they haven't done anything new to the pot ...

Oh, but they have!

I suppress a cough. Nose runs. Eyes burn. Someone is composting leaves in my throat. Scraping my lungs with a shovel.

The next roll of coughs I can't suppress. "Really?"

"Definitely," Jamie explains, voice lilting with excitement. "In this lab in British Columbia? This Nobel Prize dude? He Frankensteined that shit? It's knock-off, but shit's still pretty good. They can do whatever they want to it, you know? Make it do a thousand different things to your mind, yo."

And I think that must be true, because a couple of old dorm-floor hits later my brain springs a leak and my life seems to trickle out, as I tell Jamie and Skeet my whole story: how I left a good job as a business reporter two years ago to start an unlikely poetry-and-investment website, how we got buried in the housing collapse just as my senile father moved in, how I scrambled back to my old newspaper job, only to get laid off eight weeks ago. How I got fourteen weeks of severance from the paper, and have six weeks left to find a job, because fourteen minus eight is six. How last week it was seven, next week it will be five, but right now,

at this moment,
with Skeet in the backseat
and Jamie in front, right now,
as of this...very
moment -- and I hold the smoke
in my chest as if I can make
this moment forever -- Hooooo --
"It's six. Six weeks."

And that's not even my most pressing deadline; I have all of seven days to liquidate my retirement and pay off a $30,000 balloon payment to the mortgage company, or risk losing our house. And it is this second deadline, I tell the boys, that has given my job search such throat-constricting immediacy, as I worry over thinning want ads, shakily fill out applications and hope my references still have the positions I've listed on my resume, and how -- this part has just occurred to me -- I've gone and added another stress to a very shitty situation, because "Even if I do somehow get a job interview now, they'll probably make me take a -- "

"Pecans," says Skeet from the backseat.

"Didn't I read about some kind-a pecan diet in O?"

"How the fuck I know what you read? An' what the fuck Oprah be writin' about how to pass a drug test?"

"Dude, Oprah don't write O. She just own that shit."

"And what the fuck you be doin' readin' it?"

"So what the fuck the pecans do?"

"The fuck I'm supposed to know what the pecans do! Clean up your piss or somefin'."

"You so crazy you took the short bus to school."

"You know that shit was behavioral, yo."

And I must be high because this conversation makes sense. Jamie waves Skeet off and faces forward again. "Don't listen to that shit, Slippers. Here's all you gotta do for that piss test. Get some of them pills. You know, online?"

But before I get too deep into a new round of self-pity, Jamie offers a lilting anecdote: "You could do what my cousin Marshall did? Fucker wore a catheter? Connected to a baggy? With some other dude's piss in it? And now he screens luggage at the airport? And he's up for a supervisor job with the NTSA? And a security clearance? I shit you not, Dude's got someone who warns him about random tests, and he keeps that catheter full of someone else's whiz right there in his locker? And when he hears about tests, dude loads that shit up."

In the rearview, I see Skeet drink directly from my milk carton.

Excerpted from The Financial Lives Of The Poets by Jess Walter. Copyright 2009 Jess Walter. Published with permission from Harper Collins. All rights reserved. 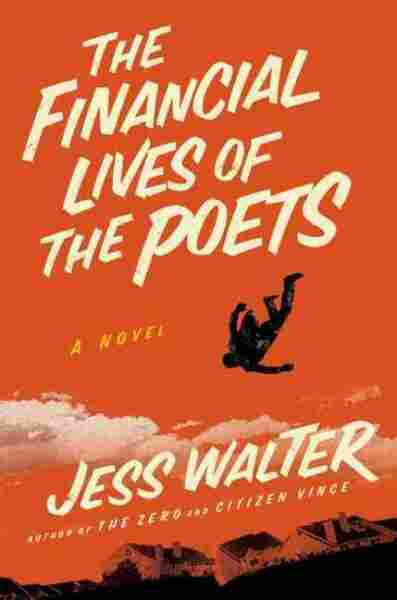 The Financial Lives of the Poets

Title
The Financial Lives of the Poets
Author
Jess Walter