Accessibility links
Terry Gilliam: The 'Imaginarium' That Almost Wasn't The director of Brazil and 12 Monkeys returns to the big screen this month with a new entry in his legendarily eccentric film catalog: a fantastical Imaginarium that almost didn't get finished. 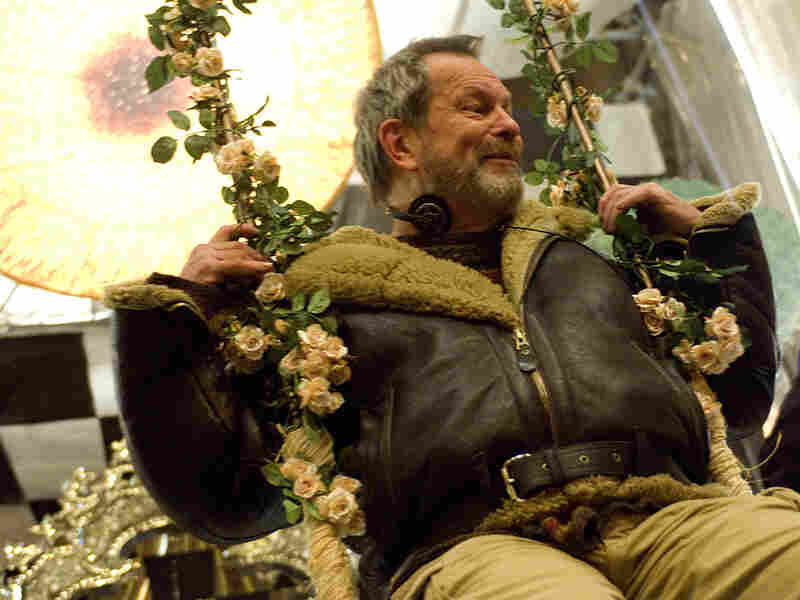 Swinging For The Fences: The legendarily eccentric film catalog of director Terry Gilliam has a new entry — a fantastical Imaginarium that almost didn't get finished. hide caption 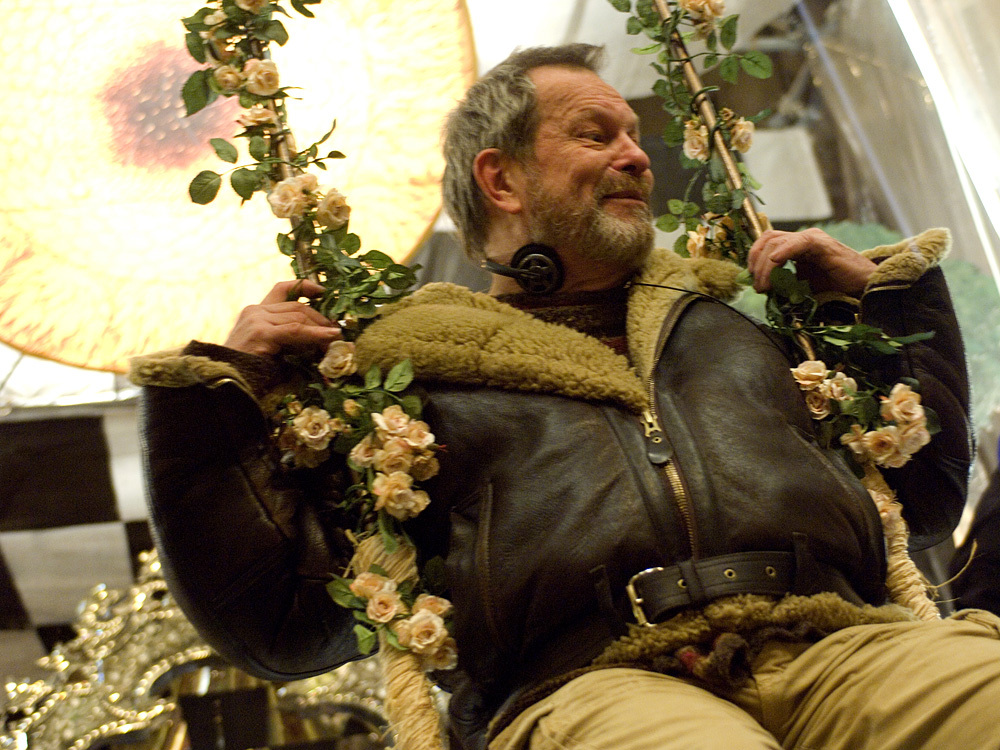 Swinging For The Fences: The legendarily eccentric film catalog of director Terry Gilliam has a new entry — a fantastical Imaginarium that almost didn't get finished.

The wild imagination of director Terry Gilliam returns to the big screen this week with The Imaginarium of Doctor Parnassus, about a small acting troupe that travels through London with an extraordinary portable stage. On it, a mirror — a looking glass — that can transport anyone from the audience into an imaginary world. The film is signature Gilliam, alive with color and fantasy and punctuated by flashes of psychedelic imagery.

And the fact that it has now been completed is a small miracle.

The money to make Dr. Parnassus almost ran out. Three days after the first round of filming wrapped, lead actor Heath Ledger died. A few months later, in the middle of post-production, the producer, Bill Vince, succumbed to cancer.

And in September 2008, Gilliam himself was struck by a car and ended up in the hospital.

But the director managed to overcome each challenge, and to complete what some critics are calling his best work in many years.

Gilliam tells NPR's Guy Raz that he had help from friends, family and colleagues as he worked to salvage Dr. Parnassus, but three people were particularly critical — starting with Johnny Depp.

"Johnny is a very close friend," Gilliam says, "and he was a close friend of Heath's as well. I called him a day or two after Heath died, just commiserating, and I said, 'I don't know what I'm gonna do, I might just close it down.'... And he said, 'Well, whatever you decide to do, I'm there.'"

It was a turning point. The film's financial backers had already started to retreat; Depp's interest helped turn the tide. Then Gilliam reached out to more of Ledger's friends — "I wanted to keep this in the family," he says — and soon Colin Farrell and Jude Law were adjusting their calendar commitments to join the project.

Moviemaking logistics being complicated, "it actually was an incredible dance between our schedule and their three schedules," Gilliam says. Even Depp's participation was in doubt at one point — but at the last minute the shoot for the gangster movie Public Enemy, a previous commitment for the actor, was pushed back a week.

Depp's total availability during that week? "A day, and three-and-a-half hours," Gilliam laughs. 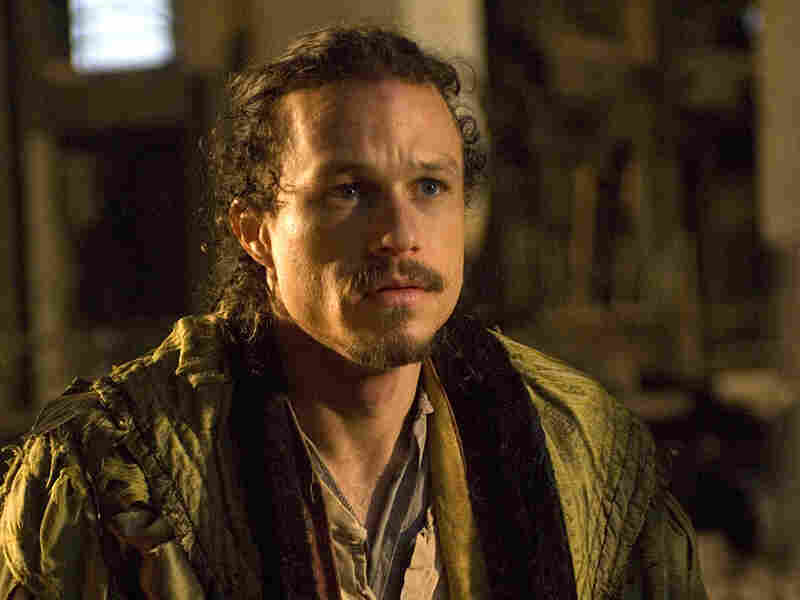 Heath Ledger in The Imaginarium of Doctor Parnassus. hide caption 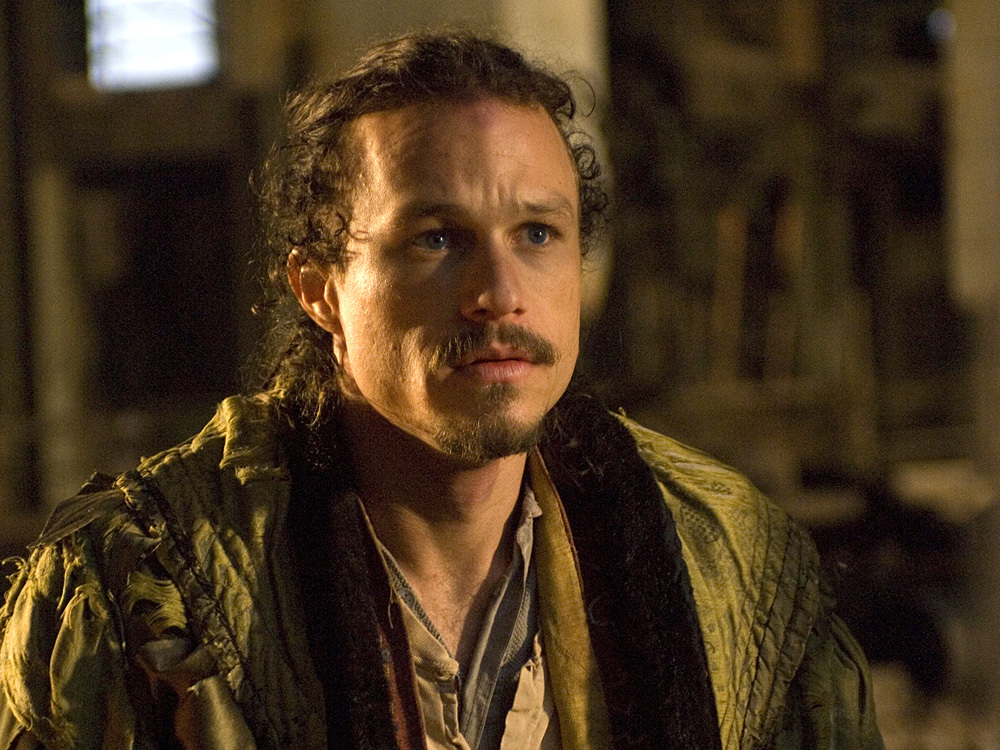 Heath Ledger in The Imaginarium of Doctor Parnassus.

Getting stars involved to save a project is one thing. But how do you weave three unplanned-for performances together to finish a story that's already been partly told by a fourth?

It helps if that story traffics in the fantastical.

"We had already established in the script the principle that if you go through the mirror with somebody else, their imagination may be stronger than yours, and you become what they want you to be," Gilliam explains.

He realized that notion could be put to use: The mysterious character initially played by Ledger could look like Law or like Farrell or like Depp — as long as the scene in question was happening on the other side of that mirror.

"At the end of the day, when it all was put together, it worked seamlessly, as though it was intended to be like this," Gilliam says.

In fact, the director is convinced that the contortions he was forced to put the film's story through ultimately improved it.

"Almost everything that I had to do to salvage the film improved the film," he says. "One scene I couldn't do, and we don't need it; another scene I shifted from this side of the mirror to the Imaginarium side of the mirror, and it works better. ... I've said that in some ways, Heath was co-directing the film posthumously, because he didn't let me do certain things that I'd originally planned to do — and all of them were for the better."

A Visual Style Unlike Any Other

More than anything, Gilliam's films — from 1981's bizarro Time Bandits to the dystopian Brazil to the wittily spectacular Adventures of Baron Munchausen in 1988 to today's Dr. Parnassus — are known for their unmistakable visual stylishness.

"Dickens has always been central to my view of London," Gilliam says. "I seem to just search out those areas that remind me of that time." He's been a resident of London for 42 years now. "I just focus on the bits that create a city that I would like to be living in — not the one that actually is there."

But the director denies attempting any particular visual style. "It's funny, because everyone says it's immediate what a Terry Gilliam film looks like — and I don't know what you're talking about, frankly."

Many critics are claiming Dr. Parnassus is one of Gilliam's best films in years. Gilliam agrees. "I'm really proud. I don't normally say this about my films, but this one I actually can openly say I think it's a wonderful film." The feeling comes with particular satisfaction considering that before this film, he had started losing a little faith.

"It just felt things weren't working well," he says. His past couple of films hadn't done particularly well, but even more depressing, his last movie, 2005's Tideland, met with silence.

"That was supposed to be a provocative film. I thought I'd get some very loud dialogue, arguments about certain things," he says. "And nothing happened."

"It was like the people who hated the film didn't talk about it. It didn't exist. And I thought, well, what am I doing? Films don't even have the power to provoke and anger people anymore."

Gilliam admits he needs that feedback badly. "I'm just a tart. I want to please people. I want to show off in front of as many people as possible." Showing off comes with a price, however, and another key characteristic of a "Terry Gilliam film" is often the perplexed critic.

"What's interesting for me is that I get critics who watch the film and it's like they're watching a foreign language — they don't understand a single thing about it," Gilliam says. "It's never changed. Over the years they want their films to be neatly packaged with a nice narrative that tells you exactly where it's going all the time.

"I fight that, because I suppose I'm still trying to make movies for myself when I was a kid and I was constantly surprised by what was going to happen next. People would then say, 'Oh, it's incomprehensible.' It's only because they don't have the imagination of children anymore."