Accessibility links
'Three-Hour Rule' To Address Tarmac Delays Starting this spring, delayed airliners must return to a terminal or face hefty fines. They must also offer food and water, maintain lavatories and provide necessary medical attention. The outcry over scenes like this one from a stalled 2007 JetBlue flight promoted the new rules. 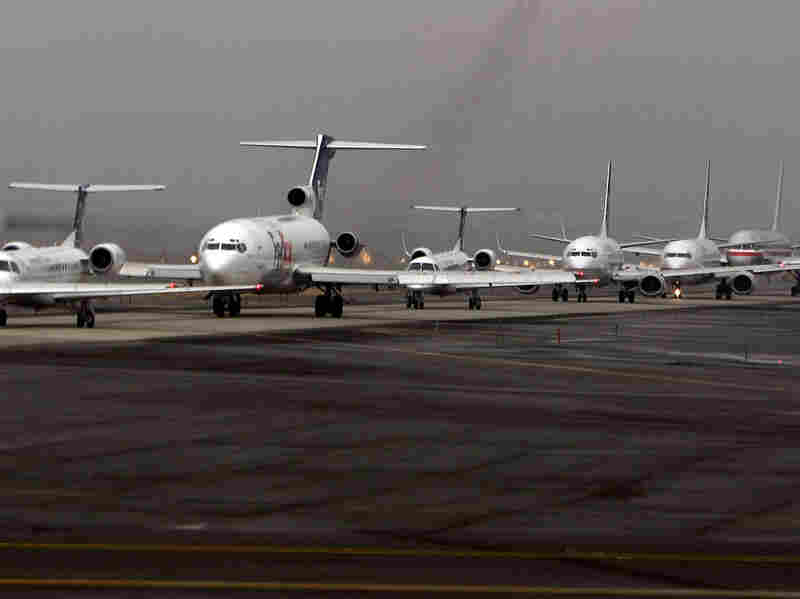 Airplanes line up as they await their turn to take off at Newark International Airport in New Jersey, February, 2008. Mario Tama/Getty Images hide caption 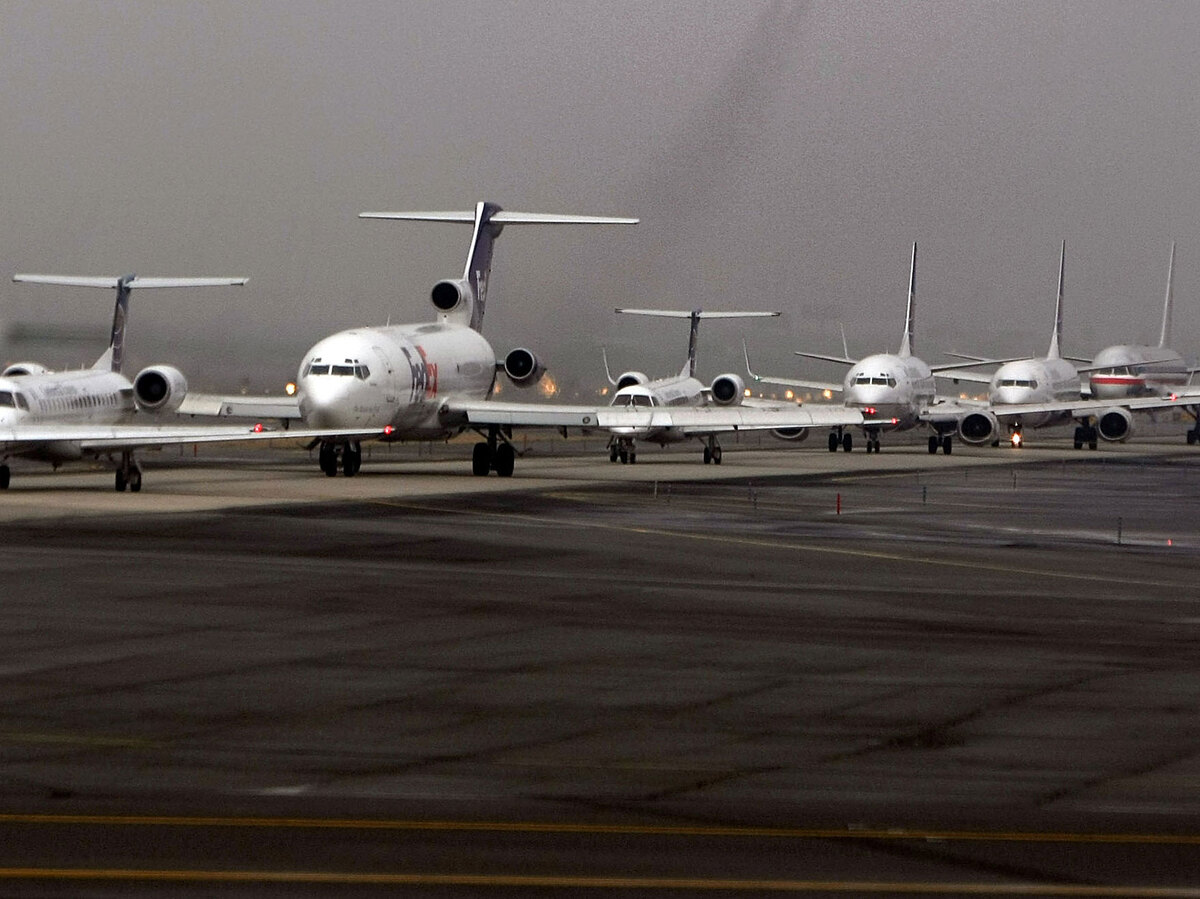 Airplanes line up as they await their turn to take off at Newark International Airport in New Jersey, February, 2008.

The U.S. Transportation Department announced new limits Monday on how long airline passengers will be forced to sit in planes stuck on airport tarmacs. Starting in the spring, planes must return to the terminal if the delay exceeds three hours.

The move follows years of complaints from passenger advocates about situations where people are held on grounded planes for hours on end — sometimes without food or a functioning lavatory.

For instance, when a Continental Express flight was stranded in Rochester, Minn., this summer, passengers complained that they went eight hours with no food except pretzels. On other jets that have been forced to sit on the tarmac, the toilets have stopped working, the air has gotten hot and stale, and parents of babies have run out of clean diapers.

Long tarmac delays happen 100 times a month or so. When they do, the conditions onboard planes can become pretty unbearable.

"You talk to anybody that's flown frequently, they will tell you that they've sat on a tarmac with no explanation about why they're sitting there, no explanation as to why there's not at least something to drink or eat, and people are sick of it," LaHood said, announcing the so-called "three-hour rule."

On domestic flights, airlines will be required to allow passengers off the plane if they've been sitting for more than three hours. Flight crews also will be required to keep the lavatories working, provide medical attention to anyone who needs it, and — once the delay hits the two-hour mark — supply adequate food and water.

Airlines that don't comply will face fines of more than $27,000 for each inconvenienced passenger, LaHood said.

"These kinds of issues and these kinds of problems should have been addressed by the airlines," he said. "The fact that they haven't been means that we at DOT have to step up and look after the passengers."

The regulation has been a long time in the making. Congress has been discussing the issue of tarmac delays for a decade; the Bush administration set up a panel to study it almost two years ago. But Monday's announcement was a surprise even to those who have been calling for action.

Fliers rights advocate Kate Hanni has been promoting the three-hour rule since 2006, since she was stuck on a tarmac for nine hours in Texas. She says she has heard from thousands of people who have been in similar situations.

"There were people with insulin reactions, people who had claustrophobia, people who could not handle being confined in that tight space without temperature control," Hanni recalled. "This is a victory for airline passengers."

The airline industry is questioning whether the rule will have unintended effects that could make things worse for passengers. At the Air Transport Association, the industry's trade group, president Jim May predicted that the rule will force airlines to cancel more flights entirely, to avoid the risk that the plane will exceed the three-hour rule.

Citing the difficulty of rebooking passengers in what he called "today's incredibly congested environment," May said the three-hour rule could end up delaying customers even more.

"The flights that got canceled out of Washington, D.C., this weekend after the terrible snows are a good example of that," May said. "A lot of those people won't reach their destinations for two, three, four days."

May said industry surveys suggest that most passengers actually would prefer to withstand a long tarmac delay, if the other option is having their flight canceled. Still, he says airlines intend to comply with the new rule.

That means even no-frills airlines very likely will have to carry some snacks onboard in case they need them during a delay. And he says airlines will work with airports to find safe ways to deplane passengers, even if all of the gates are occupied.