Accessibility links
Solicitor General Kagan Holds Views Close To Her Chest Elena Kagan, the chief advocate for the United States before the Supreme Court, is often mentioned as a nominee for the high court. But people who know and have worked with her say her core beliefs elude them. 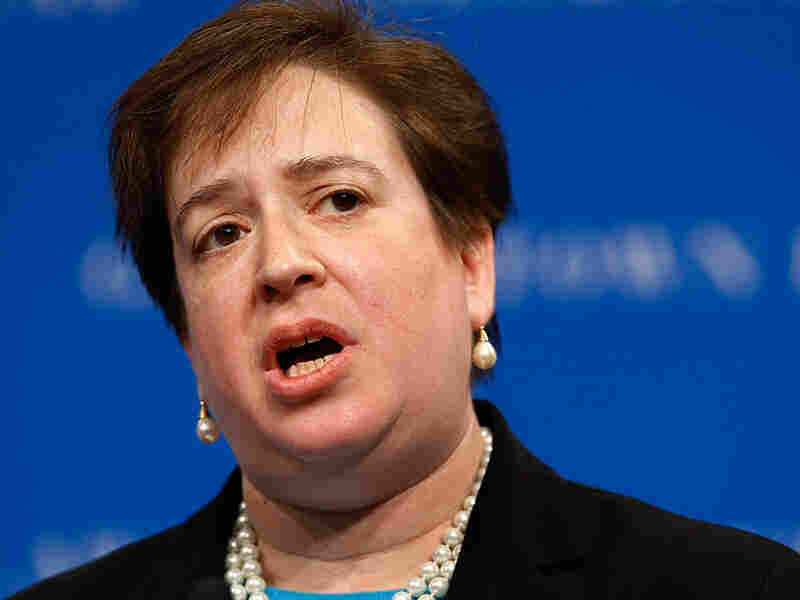 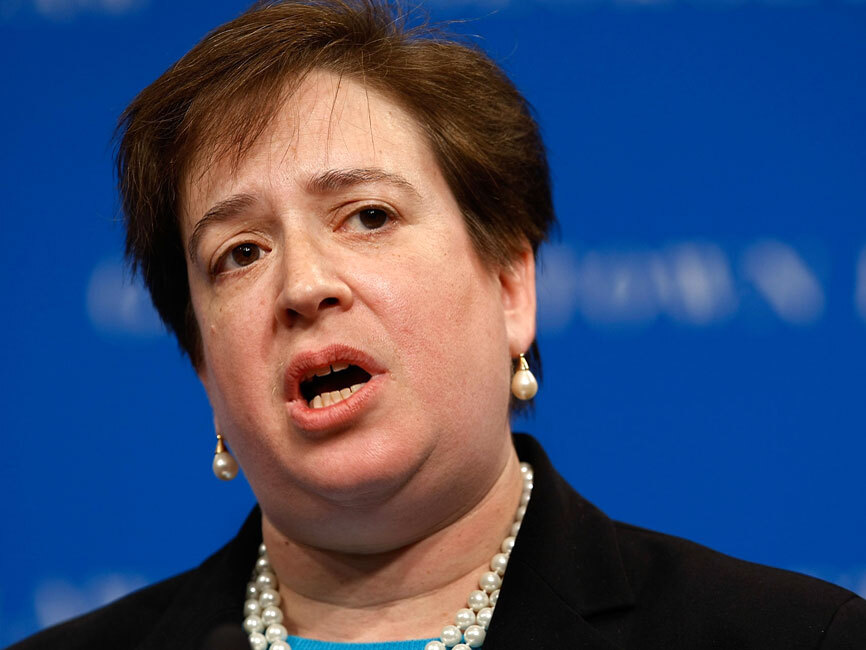 When the U.S. Supreme Court returns in January, Solicitor General Elena Kagan will be back at the lectern, arguing government positions that this term are increasingly tough to sell to a court that is aggressively flexing its conservative muscles.

Kagan, who as a Supreme Court law clerk 25 years ago was routinely called "Shorty" by her boss, is now the chief advocate for the United States before that court. At 49, the dynamo with the ready grin has not added inches to her height, but her stature has grown.

Formerly dean of Harvard Law School, she is the first female to serve as solicitor general of the United States and is often mentioned as a possible Supreme Court nominee.

Widely admired for her intellectual acumen and administrative ability as dean at Harvard, Kagan came to the job of solicitor general with one huge, gaping void: She had never argued a case in the Supreme Court or any other court for that matter.

At her confirmation hearing, she told skeptical senators that she was not worried, that she was bringing with her a lifetime of learning and study in the law — as a teacher, as a private practitioner and as a lawyer in the Clinton administration.

But not all of the senators were persuaded.

Sens. Tom Coburn and John Kyl both said they wouldn't want a surgeon working on them with so little practical experience.

Kagan, however, was unfazed, saying "frankly anybody has some gaps."

Despite her insistence that she had no worries, months later, when she stepped up to the lectern at the high court to defend a century-long feature of campaign finance law, she admits she had the jitters.

"I was nervous because it was my first one," she said in an interview. "But honestly no more nervous than I've been lots of other times in my life when I've done things for the first time."

And, she adds, once the first sentence was out of her mouth, she found the experience "fun. It's challenging, and it's exciting."

That said, the night before, she went to the movies to forget about the case. And, tellingly, she can't remember what she saw.

She knew she likely had a losing hand, and was grim about it in private. But when she faced the court, she cheerfully sparred with the justices, seeming to relish the experience and bluntly telling them that over the past century, the court had never before questioned the ban on corporate spending for candidate elections.

Justice Antonin Scalia replied that the court may never have questioned the ban, but it had never approved it, either. Congress, he suggested, is too self-interested to be trusted on the matter.

"I doubt that one can expect a body of incumbents to draw election restrictions that do not favor incumbents," he said, to which Kagan said he was simply "wrong."

In fact, Kagan said, corporate and union moneys go overwhelmingly to incumbents, so limiting that money, as Congress did in the campaign finance law, "may be the single most self-denying thing that Congress has ever done."

Scalia likes that kind of push back, and he likes Kagan: "That's what's supposed to happen," he said in an interview. "The reason you ask the question is to see if there's a decent answer to it."

Nonetheless, Scalia has made the same point about incumbency before, and it is unlikely that Kagan got him to change his mind.

To date, she has argued three major cases before the court — and in all of them, the betting odds are that the government will lose. Scalia, however, points out that she chose those cases to argue. "She stepped into the line of fire," he observes. "She volunteered."

As the first woman to hold the job of solicitor general, Kagan was the subject of much speculation — about what she would wear when arguing. All solicitors general before her had worn a long morning coat, with tails. She decided not to, mainly because she thought she wouldn't be comfortable. Not to mention that at less than 5 feet 3 inches tall, she would have looked a bit like a penguin in the long-tailed coat.

Kagan grew up in New York City, where her mother was a teacher and her father a lawyer. She cites her education at Hunter College High School, a public school for high achievers, as a formative experience because it was all girls in grades 7 to 12.

"It was a very cool thing to be a smart girl, as opposed to some other, different kind," she says. "And I think that made a great deal of difference to me growing up and in my life afterward."

Kagan went on to be a star student at Princeton University, then at Harvard Law School, where she was supervising editor of the Law Review. Then it was on to a clerkship for the man she calls her mentor, Supreme Court Justice Thurgood Marshall, whose portrait hangs over the mantel in her office. After that, besides teaching and practicing law, she held important positions in the Clinton administration. /P>

President Clinton nominated her for a judgeship on the Federal Appeals Court in Washington, but the Republican-controlled Senate never took up the nomination.

In 1999, she returned to Harvard and subsequently became the law school dean. There, she was hugely popular with students and won widespread praise for ending decades of ideological faculty feuding.

Liberals and conservatives alike praised her to the skies. She shook up the faculty with new hires, including some eminent and controversial conservatives, and she defended them when they were under attack. She even won a standing ovation at the national convention of the conservative Federalist Society.

As she tells the story: "I looked out at them and said, 'You are not my people,' and everyone laughed, and then I said, 'But I love the Federalist Society,' and I think that is when I got a standing ovation. People, it turns out, loved to be told that they are loved."

Or, as one Kagan fan at Harvard puts it ruefully, "Elena is a master pool shark, and we are all the balls she is shooting in the pockets."

Now, as the chief advocate for the United States in the Supreme Court, her job is to defend statutes enacted by Congress, regulations enacted by agencies, and the actions of the president, when challenged.

She also decides which cases to appeal in the lower courts — a huge job that earns her daily "irate phone calls" from the heads of agencies and others in the government whose cases she has decided not to appeal.

In her visible role as the government's chief advocate in the Supreme Court, she says she will defend any statute or government action "as long as there is a colorable argument to be made," meaning as long as there is a plausible argument. That is her duty, she says, even if she personally doesn't agree with the policy she is defending. The only exceptions would be if Congress has enacted a statute that tramples on the powers of the president — for example, if it sought to regulate the pardon power.

There are, however, notable examples of solicitors general who have refused to sign a brief or argue a case because they thought the government's view unconscionable. In the 1950s, Solicitor General Simon Sobeloff, for example, famously refused to defend the government's contention that the so-called loyalty board could fire public employees based on the statements of unidentified informants. The Supreme Court subsequently struck down the practice by a vote of 8-to-1.

Solicitor General Kagan implies she would not stay on if she faced a similar dilemma.

"I think that if there are positions that you can't argue ... then the responsibility is probably to resign," she says. "If one's own conscience is opposed to the requirements and responsibilities of the job, then it's time to leave the job."

But just what Elena Kagan's core beliefs are is something that seems to elude even those who know her well and have worked with her. Said one of her former colleagues at Harvard, an avowed fan, "Elena is the single most competitive and most inscrutable person I have ever known."

And while her elusiveness may be a plus in some ways, it is a definite negative to those on the left who are not comfortable with the notion of her serving on the Supreme Court, and have made that clear to the White House.

Says one of her defenders: "The left is wrong about Elena. On most subjects, except for executive power and some business questions, she is a liberal. She has dominated every position she ever held, and on a court that is closely divided, she would dominate, too."

Does she consider herself a liberal? Again, the nonanswer: "What my political views or my constitutional views are just doesn't matter."

As dean at Harvard, she cut off campus access for military recruiters because she felt the military's "don't ask, don't tell" policy discriminates against homosexuals. She has referred to the policy as "a moral injustice of the first order."

But when asked whether she could defend the policy, she demurs, alluding to the fact that she is now handling cases involving that very policy.

Even far more general questions about regrets or proudest moments produce little from the cagey Kagan. "I have no regrets. I don't believe in looking back," she says. "What I am proudest of? Working really hard... and achieving as much as I could."