Accessibility links
Sorcery Charges On The Rise In Saudi Arabia The Lebanese host of a popular TV show who gave callers advice and sometimes predicted the future was sentenced to death by a court in Saudi Arabia in November for sorcery. Human rights groups say these cases are on the rise in the strictly religious country and birthplace of Islam. 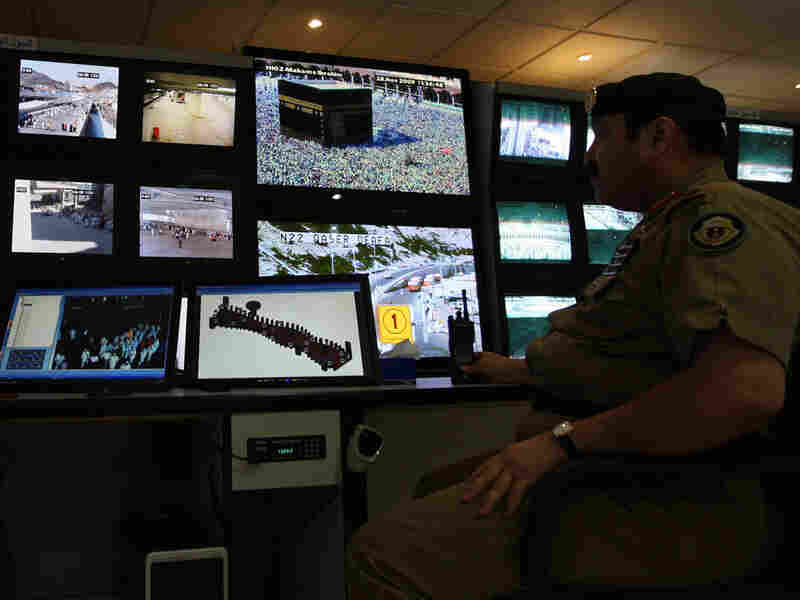 Saudi police officers monitor screens connected to cameras at all of the holy places in Mina near Mecca, Saudi Arabia, in November. Hassan Ammar/AP hide caption 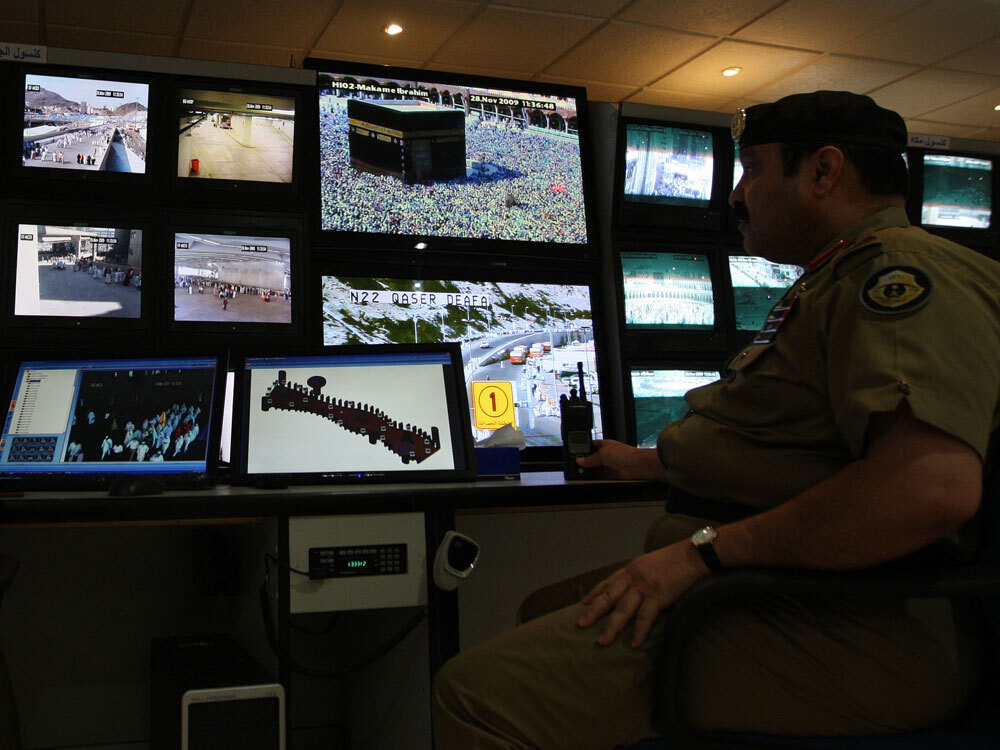 Saudi police officers monitor screens connected to cameras at all of the holy places in Mina near Mecca, Saudi Arabia, in November.

A Lebanese man who hosted a popular TV show where he gave callers advice and sometimes predicted the future was sentenced to death by a court in Saudi Arabia last month. His charge? Sorcery.

Ali Hussain Sibat's popular call-in show was broadcast on a satellite TV channel in Arabic around the Middle East from Beirut. In May 2008, Sibat traveled to Saudi Arabia on a pilgrimage to the holy cities of Mecca and Medina. His lawyer, May al-Khansa, says Saudi religious police recognized Sibat from his TV work and arrested him.

Not An Isolated Case

Human rights groups say such cases are on the rise in the strictly religious country. Saudi officials have arrested Saudis and non-Saudis, Muslims and non-Muslims on sorcery charges.

In recent months, a Saudi man was arrested for smuggling a book about witchcraft into the country. An Asian man was accused of using his powers to solve marital disputes. And a third man was given a death sentence for trying to learn magic.

In 2007, Saudi authorities executed an Egyptian pharmacist for sorcery.

Sibat confessed to Saudi authorities that he consulted spirits to predict the future. But the authorities didn't release him. Instead, they brought him to a TV studio and told him to confess again. The conversation was broadcast on a Saudi program about religion.

"How do you rate yourself among magicians?" an interviewer asked Sibat.

"What?" said Sibat, clearly nervous. "I have failed. I confess in front of God."

Sibat was then tried in court, and the confession was used against him. He was sentenced to death on Nov. 9. Saudi justice officials would not respond to several requests for comment about his case.

Instead, judges view people who believe in the supernatural as heretics and often sentence them according to the judges' own personal training in Sharia, or Islamic law. Whitson says this means anyone could be targeted.

"You will never know on any given day whether the book you are reading or the words you are saying are going to be interpreted or used against you deliberately as a form of witchcraft," Whitson says.

Belief in genies, or jinn, as they're called in Arabic, is quite common in Saudi Arabia. But the strict form of Islam practiced in Saudi Arabia forbids people from worshiping anyone other than God.

The religious police headquarters in Riyadh, the Saudi capital, has an entire department devoted to combating sorcery and witchcraft and regularly distributes pamphlets and DVDs. In one DVD, which is set to religious music, police search people's homes for signs that they practice witchcraft.

But, he says, there is also a political reason for the recent rise in sorcery cases.

In the past few years, the government has tried to curb the influence of the religious establishment by sacking key religious figures, pushing for reform in the courts and criticizing the religious police.

"One time, I met the head of the Hey'a [the religious police] and he was really sorry because in the past he was saying that they were free to do whatever they like to enforce the Sharia laws — even, he said, in the public buses, in the train, in the airports," Saif says.

But now that they are under pressure, the religious police are trying to flex their muscles in the few ways they still can, including looking for people who practice magic or who don't pray five times a day, and for women who don't properly cover their hair, Saif says.