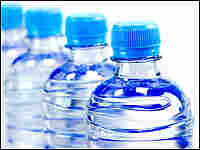 More on the Water Debates

Bill Marsh, author of "A Battle Between the Bottle and the Faucet," published in The New York Times

Last year, Americans bought more than 4 billion gallons of water in individual-portion bottles. Most of the containers end up in the trash. But now, there's a competitive global market for the bottles, once they're recycled.

Poland Spring has a bottling plant in Hollis, Maine. It chose the pristine spot, in an area saturated with springs, about a decade ago, when the bottled water market was taking off. The company goes to great lengths to protect the watershed. But in order to sell spring water competitively, it bottles the water using a non-renewable resource: polyethylene terephthalate, or PET, made from natural gas and petroleum.

Birth of the Bottles

The bottling plant in Hollis produced 1.8 billion bottles of water last year. They march through the plant single file, knocking into each other like bumper cars before getting filled. The bottles are made from what is called a "preform," composed of PET resin that is melted and molded. Next, it's heated, stretched and blown out, like a balloon, into a bottle.

Kim Jeffery, the president and CEO of Nestlé Waters North America, says it was the PET bottle that jump-started the bottled water industry. Poland Spring, one of Nestlé's brands, first bottled water in PET in 1990.

"It revolutionized our industry," Jeffery says, "because now people could get bottled water in the same format they were getting soft drinks in ... and that changed everything."

Today, consumers can take water on the go. But the bottles don't always get tossed into recycling bins. Only about 23 percent of bottles, including soda, are recycled.

In Hartford, Conn., trucks transport recycled plastic, glass and aluminum from residents' homes to the Connecticut Resources Recovery Authority, one of hundreds of recycling facilities in the U.S. Sean Duffy is president of Fairfield County Recycling, which operates the plant. He says water bottles collected from the curbside recycling program yield valuable material. Duffy's company makes a profit on each bottle made from PET. "We have the capacity to process it, and it is in high demand," Duffy says. "So we want every pound we can get."

Paul Zordan also wants every pound he can get. Zordan is constantly looking for bottles. He's vice president of UltrePET, a PET "reclaimer" in Albany, N.Y. Reclaiming PET is grimey, grungy work. It begins by sorting through dirty bottles, by machine and by hand. It looks like garbage, but, Zordan says, "It's gonna be money to us if we can do our job right. It's garbage now, but it's going to turn into a usable resin to make something out of."

UltrePET cleans the bottles and then chops them into chips, each smaller than a cornflake. Zordan describes his work as mining. Indeed, the white flakes mined from the would-be trash sparkle like diamonds. Then, they're heated and turned into tiny white pellets of recycled PET, which competes on the marketplace with virgin PET. It's a hot market — so hot that the Chinese are coming to the U.S. to buy nearly 40 percent of the bottles Americans recycle.

"China is the No. 1 consumer of the material collected in this country," Zordan says. "So if they're taking the lion's share, then there's only so much available for people like us." While used bottles from the U.S. are going to China, reclaimers like Zordan are criss-crossing the U.S. and even going to Canada, Mexico and Latin America to find PET. In all, they imported nearly 300 million pounds of flakes and bottles in 2005.

A Bottle's Afterlife: Your Carpet?

Recycled PET can be made into fiber, and then purchased by companies such as Interface Fabrics in Guilford, Maine.

The company's industrial loom weaves a heathered grey-blue cloth, with a silky finish, that will eventually become the wall covering for office cubicles. Ben King oversees operations for Interface Fabrics.

Recycled PET is turning up in a lot of items: carpets, clothing, automotive parts and even new bottles. With so much demand for the empties — and so many bottles in the marketplace — the question pressing on recyclers and beverage companies alike is how to get more of them recycled.