Accessibility links
Landowner Calls On Death To Save Her Farm A few years ago, trees started coming down across the road from Joan Graham's Michigan horse farm. She set in place a plan to conserve her land after her death by giving it to a conservancy. But just to be safe, she added a grave twist: She would have her body — and anyone else who wanted to join her — buried on the land. 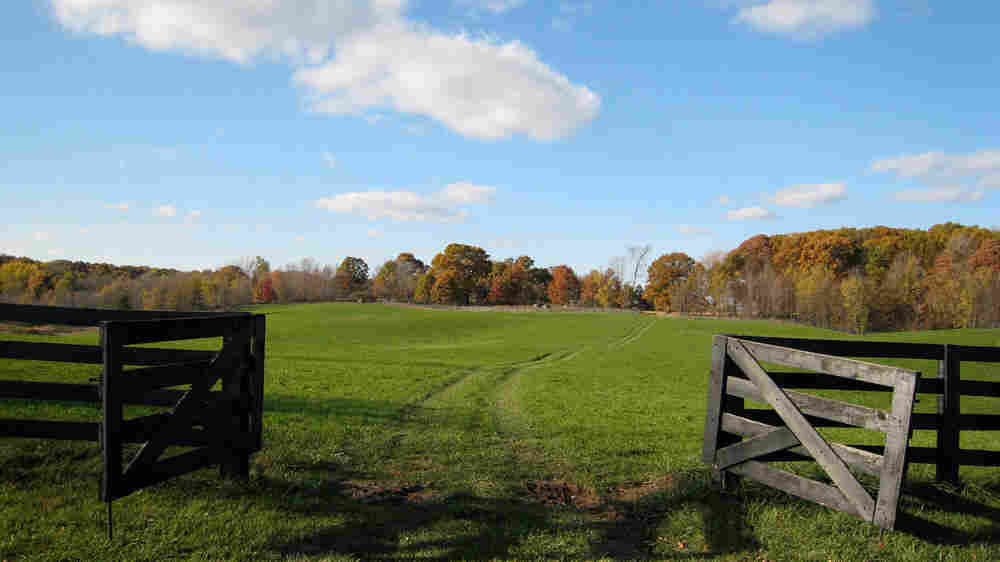 Joan Graham's idea is to turn her land into an environmentally friendly cemetery; she's betting that down the road, people will think twice before building a shopping mall on what was once a sacred human burial ground. David Baron for NPR hide caption

To quote a famous line from a famous movie, "It's the only thing that lasts" — land, that is. No wonder, then, that many see land as their legacy, something to pass down to future generations when they die.

A landowner in Michigan wants to use death itself — her own — to leave a legacy that's unusually personal.

Joan Graham, 80, owns a horse farm in the small town of Metamora, north of Detroit.

A few years ago, trees started coming down on the lot across the road. Graham wasn't pleased. "It's going to be a subdivision. I hate to think of what it's going to look like."

To protect her land, Graham decided to bequeath the farm to a local conservation group, the Six Rivers Regional Land Conservancy. The conservancy promised not to develop the property after she's gone.

But then Graham thought, why should she have to go? So, in 2007, she made the following request: When she dies, she wants to be buried on her property, beneath an oak.

"They have deep taproots," she explained. "Wouldn't it be nice if that oak tree would ever reach my remains, and the tree would take nourishment from that? And it's kind of like I never died, really. I just morphed into a tree or something." 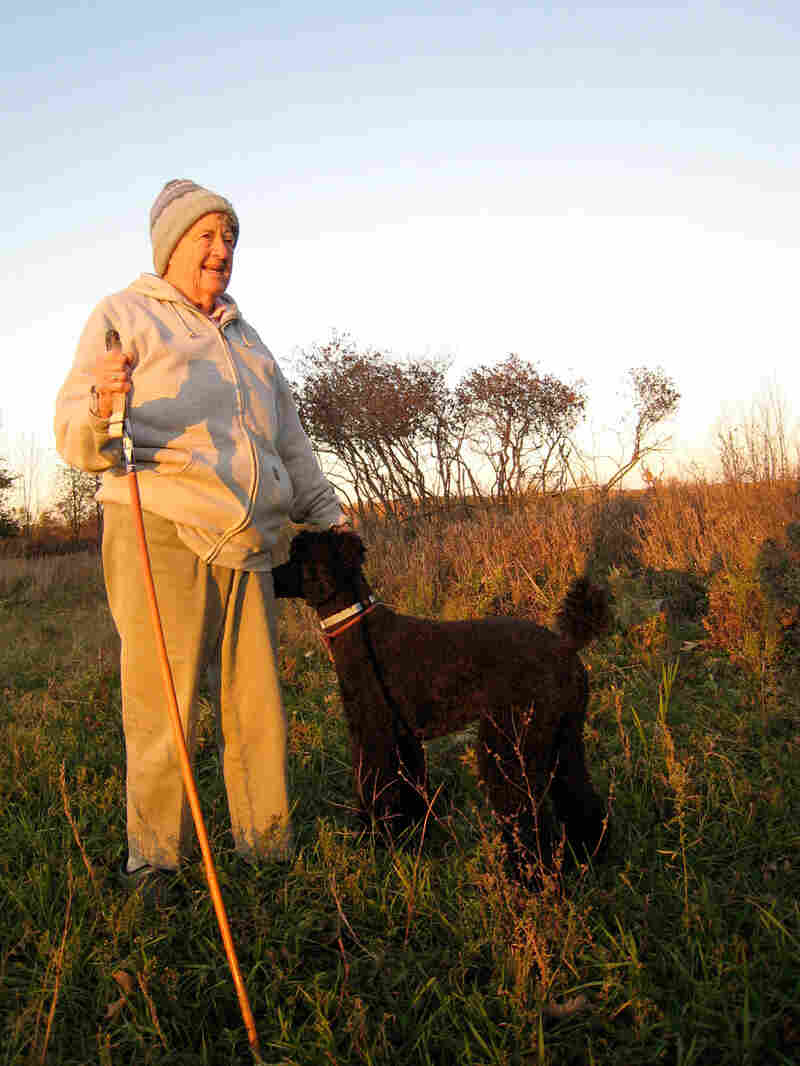 Joan Graham hopes to be buried near this site. David Baron for NPR hide caption 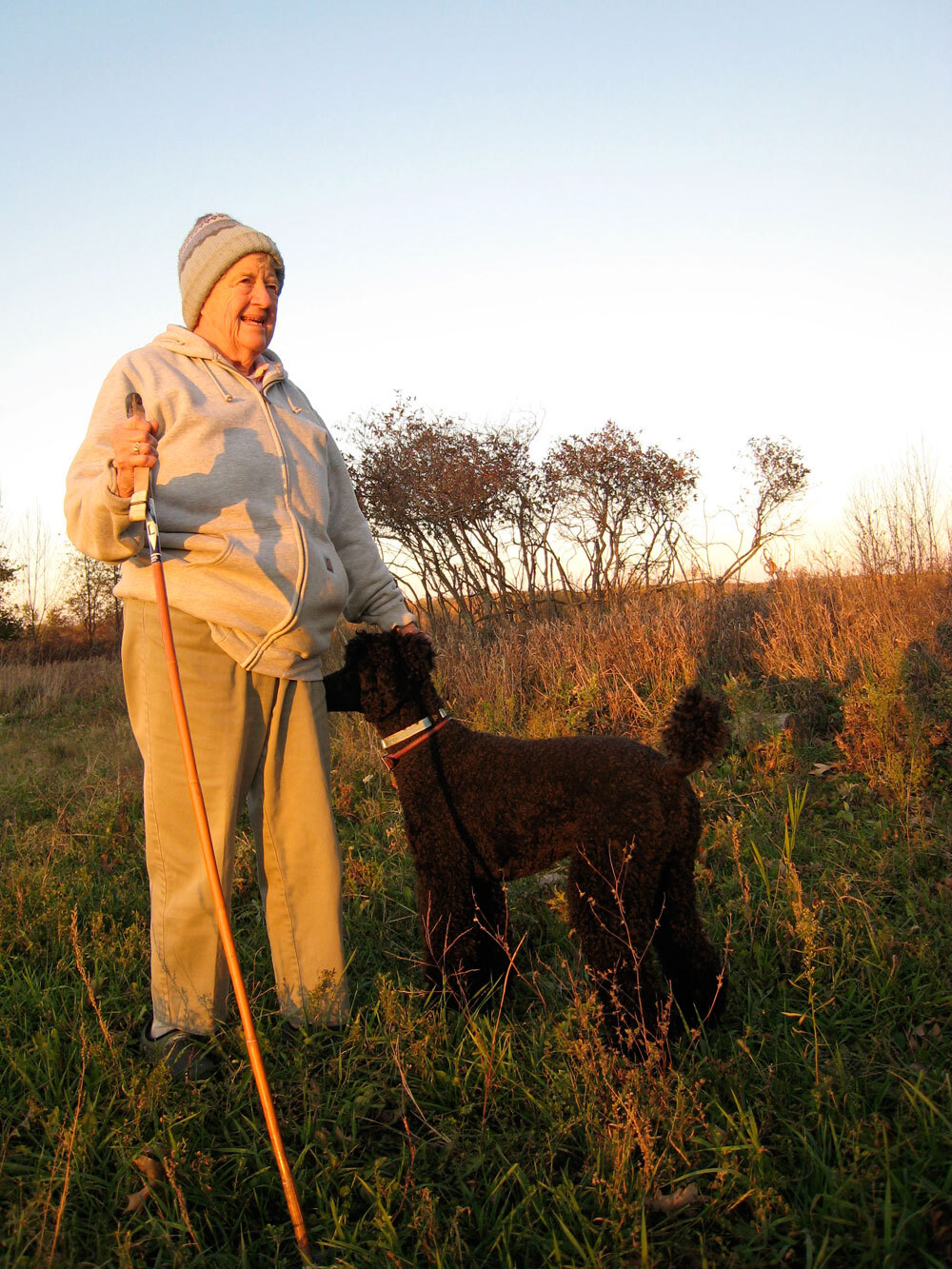 Joan Graham hopes to be buried near this site.

"She said that she would like to share it," Folland recalled. "She would welcome others who would want to be buried there."

Graham's proposal was to turn a portion of the farm into a highly unusual cemetery — an environmentally friendly one, with no embalming and no fertilized lawn. Bodies would be interred in biodegradable caskets or shrouds, with rocks and trees as grave markers.

Folland brought the idea to her organization's board.

"The first reactions varied from, 'Oh that sounds lovely' — just an immediate warming to it," she recalled, "to people who thought it was pretty kooky, like maybe we shouldn't be engaged with crazy ideas like that."

But the more Folland thought about the idea, the more excited she grew.

One of the challenges of conservation is getting the public to feel invested in protecting land. Folland realized that burying bodies on the farm would make the land sacred — a place people would always want to preserve.

But was this plan legal? How would she do it?

In the fall of 2007, Folland sought the advice of a prominent Michigan funeral director, Thomas Lynch. The two met in his office, a formal room with dark wood and subdued light.

"So you want to take a natural field — woods — and just say, 'Let's put our dead in here,' " Lynch said, making sure he understood the concept being proposed. "And by doing so, we're sort of upping the conservancy ante, because once people have buried their dead, they're disinclined to put, you know, a bookstore there."

"Yes, I believe so," Folland replied.

Lynch was supportive. "That makes good sense," he said. He added that no laws barred the idea — bodies don't have to be embalmed, for instance — but any cemetery would have to meet state regulations.

Folland came away energized but cautious.

"It's not something that I would be able to do on my own, and that our conservancy would certainly want to do," she said after the meeting. "We need other partners to be in the lead with certain details."

Folland contacted an organization called the Green Burial Council. The group is trying to jump-start a movement toward more environmentally friendly cemeteries in the United States.

The council's founder, Joe Sehee, came to Michigan, met with Joan Graham on her farm, and agreed to help with the project.

"It's a beautiful gift that Joan is giving to a lot of people," said Sehee. "Her last act on Earth could be incredibly meaningful and could do a lot of wonderful things for a lot of years."

Sehee said what the land conservancy needed was a partner in the cemetery business, and he had an idea. "Based on our preliminary research, it seems like one of the most promising possibilities is a partnership with the township."

Meeting With The Township

In 2008, Folland and Sehee met with local officials to pitch an idea. What if Metamora Township operated the burial ground as an annex to its existing cemetery? Sehee argued that the new, "green" cemetery would help protect the land and could bring revenue to the town.

But the presentation didn't go over well. Township officials questioned the wisdom of burying bodies in the woods. What if a loved one visiting a grave tripped over a fallen log? Who would be liable?

And officials were skeptical of the finances.

"I could see their side of things," Folland said later. "I think we have to show them more than theoretical numbers that it was going to work. So they were not interested in taking on that responsibility."

Folland kept looking for partners. She courted private cemetery operators. Some seemed interested at first, but they too weren't sure in the end that they could make the concept work as a business.

Now, more than two years after Graham made her request, Folland says fulfilling it has proved surprisingly difficult. "The details are a lot more complicated than I ever expected."

But Folland hasn't given up, and neither has Graham.

"I'm determined to go ahead with it," says Graham.

Even if Graham can't make a formal green cemetery a reality, under Michigan law she can establish a tiny, private burial ground — in essence, a family plot — on her farm.

So that's the plan now — to create a place for friends and relatives to be buried. Graham has picked out a spot for the graves, up the hill by the woodlot.

This fall, at a party on her farm, Graham recruited volunteers. "I wouldn't mind if other people joined me up there," she said, "as long as they're willing to be a flower or a tree."

Her friends were flattered. Several accepted the offer.

And among the most enthusiastic volunteers was Folland. "If there was a place for me, that would be good," she says. "I would like that for myself."

After two years trying to sell the concept of green burial, Folland says she's sold on it herself.