Accessibility links
A Robot Named Shimon Wants To Jam With You A robot programmed to play in the style of jazz masters such as Thelonious Monk and John Coltrane was part of the first intercontinental musical interaction between humans and machines. The robot can listen, improvise and interact with people using an iPhone app.

What was billed as the first intercontinental musical interaction between humans and robots took place the weekend of Dec. 17. It involved humans in Japan using an application called ZoozBeat on their iPhones and a robot named Shimon in Atlanta. 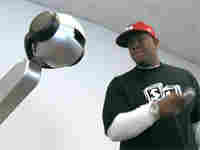 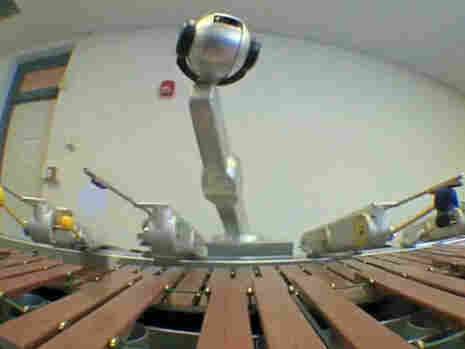 Shimon jams on the marimba. Its head nods in time with the music, the way a human's would. Click here, or on the photo above, to watch video of Shimon in action.
courtesy of Georgia Tech Music Technology Center

According to its makers, unlike other robots that can play music, Shimon is perceptual. The robot can listen to what is played, analyze it and then improvise. And it has been taught to improvise like some jazz masters.

Gil Weinberg of Georgia Tech's music technology program recently spoke to NPR's Robert Siegel from Japan, where he witnessed the historic interaction. Weinberg says the result is music meant to inspire people — not an effort to turn our music-making over to robots.

"The whole idea is to use computer algorithms to create music in ways that humans will never create," Weinberg says. "Our motto is, 'Listen like a human, but improvise like a machine.' "

Weinberg programmed Shimon to play like Thelonious Monk. He says that, though he and his team were trying to teach the robot to play like a machine, they first had to teach it how a human plays. To do that, they used statistics and analysis of Monk's improvisation. Once they had a statistical model of the pianist, they could program the robot to improvise in that model.

Weinberg says the robot won't play everything exactly like the bebop pianist — or any other jazz master — would, though he says, "It probably will keep the nature and the character of [the musician's] style."

"It's difficult to predict exactly what they would do in every single moment in time," he says. "But our algorithm pretty much looks at the past several notes that it plays and, based on that, it sees what is the probability of the next note to be, based on all of this analysis of a large corpus of transcribed improvisation."

Some musicians are harder to program than others. Weinberg says Ornette Coleman would require a much larger body of transcribed work than Monk did.

"In a sense, it kind of reduces music to numbers and statistics," Weinberg says. Given enough tweaking to the algorithms that the program uses, he says he thinks they'll be able to create something "very similar to the jazz master."

But Weinberg says he doesn't think the robot should try to play just like a human.

"In all the emotional and expressive energy, I don't think a robot can capture [it]," Weinberg says. Maybe someday a computer program could, but at least right now, Weinberg says, "I don't think we have the math for that. We have some math to get the notes and the rhythm and the scales. Whether this can capture the genius of Thelonious Monk, I hope not. But maybe."