Accessibility links
Free Downloads: The Best Of NPR Music Live Our gift to you this year: a plethora of NPR Music's favorite live recordings, all for free download. Keep the very best concerts we recorded across the country in 2009 — and, by "the country," we mean "Washington, D.C.; Newport, R.I.; New York City; Austin, Texas; and just across the room at Bob Boilen's desk." 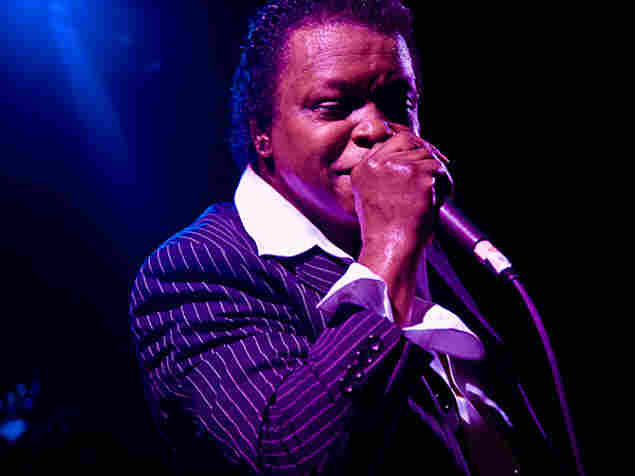 Lee Fields tearing it up at the NPR Music show at Joe's Pub in July of 2009. Jacob Blickenstaff hide caption 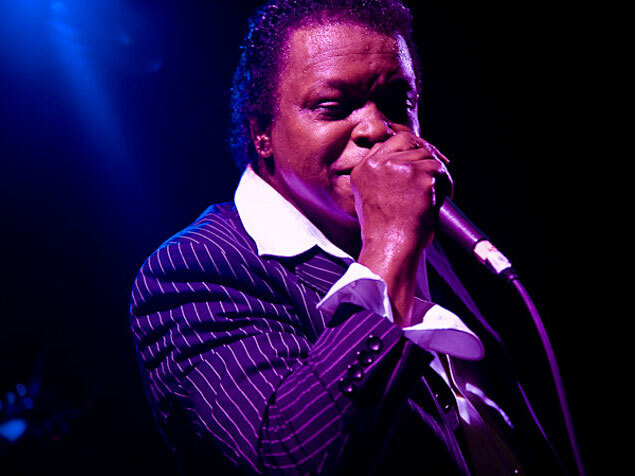 Lee Fields tearing it up at the NPR Music show at Joe's Pub in July of 2009.

Our gift to you, the best readers and listeners one could ever want: a plethora of NPR Music's favorite live recordings, all for free download. Keep the very best concerts we recorded across the country in 2009 — and, by "the country," we mean "Washington, D.C.; Newport, R.I.; New York City; Austin, Texas; and just across the room at Bob Boilen's desk."

Some of you came out to see the shows we put on and/or recorded, many of you cavorted in our chat rooms and comments sections, and still more of you grabbed the Live in Concert From All Songs Considered podcast so you could rock out whenever, wherever. Thank you for being as excited as we are to hear excellent music.

So here you go: Take these with you as you travel for the holidays, and tell us what you'd like to hear next year.

It was a wild idea, hatched on a boozy flight back to D.C. from SXSW (I'm not the best flier and I forgot my pills, so the Bloody Marys were happening no matter how many of my bosses were sitting right behind me; again, I apologize): We would put on a show with really good, quite large bands, and we would prove that people would come out to hear very different styles of music all on the same night. We even had the lineup in mind before we touched down in Baltimore. (I'd also like to apologize, again, to my boss' parents.) It totally worked. In front of a sold-out New York crowd, Sex Mob's Steven Bernstein sat in with Fight the Big Bull, a voracious 11-piece jazz group led by Richmond's Matt White. The eight members of The Phenomenal Handclap Band brought the people to their feet with infectious groovy rock, complemented by not one but two dove-shaped tambourines. And then The Expressions came out. They're a group of musicians who've played together for years and backed Sharon Jones, Sammy Ayala and Amy Winehouse, so it wasn't much of a surprise that they locked in right away. It was a surprise when the soul master Lee Fields' mic didn't work. But that was only for a moment, and by then, the crowd was fully on his side, yelling back at every raspy exhortation, alternately freezing in awe and working up a sweat to lovers' jams like "Ladies" and "Honey Dove." The man's a legend and a hero, and this download is the best present I'll give to anyone this year.

At NPR Music, our jobs largely consist of evangelizing on behalf of our favorite music — of listening to songs all day, writing about them, and conjuring up new ways to help people discover them. It's sort of like having a job in which you maintain quality control at luxury hotels by undergoing spa treatments all day. The last thing we needed was a perk, but we wound up launching Tiny Desk Concerts anyway. So we spent a good chunk of 2009 welcoming a parade of jaw-droppingly great performers to our offices, from The Swell Season (part one and part two) to a pair of string quartets and (still to come) a Colombian jazz harpist. Picking a favorite feels sacrilegious — Raphael Saadiq? Ralph Stanley? Fanfarlo? Jason Vieaux? — but I'm going to go with The Avett Brothers, whose hair-raising genius elicited cheers, yells and gasps from our assembled coworkers.

For me, organizing our annual party at The Parish in Austin during the SXSW Music Festival was a frantic blur of backstage deli trays, drink-ticket distribution and guest-list enforcement with a door guy named Scorpion Child. A welcome moment of calm came during K'Naan's performance. The Somali-born rapper led a tender sing-along of "Wavin' Flag," an anthem that describes his violent upbringing in a way that's simultaneously heartbreaking and uplifting. He even had the cool kids in the audience singing along. I remembered then why we do this. Download K'Naan's entire set, and all of the other performances we presented at SXSW this year, including The Decemberists, Blind Pilot and The Heartless Bastards.

Though it's not a concert, this was my favorite live moment of the year. After streaming Cecilia Bartoli's newest album ahead of its release date, we called her up and she took questions from listeners about her career and the story of the castrati, boy singers of the 17th and 18th centuries who were castrated with the hopes of becoming the highly lauded opera stars of the time. On Bartoli's latest CD, Sacrificium, she sings music written for them. With more than eight million CDs sold, four Grammys and numerous Gold Disc awards, mezzo-soprano Bartoli could easily set her career on cruise control. But that's not the Bartoli way. Instead, she enjoys playing the musical archaeologist, digging up long-forgotten operas associated with composers and artists far removed from the spotlight.

The rain held off all weekend at the 50th anniversary of the Newport Folk Festival — until the very end, when Pete Seeger took the stage for the final sing-along, a quiet drizzle anointed thousands as they sang "When the Saints Go Marching In." It was the end of an emotional two-day multi-generational celebration, which included Arlo Guthrie, Mavis Staples, Joan Baez, Billy Bragg, Judy Collins and a younger set of indie rockers and folk revivalists like The Avett Brothers, The Low Anthem, The Decemberists and Gillian Welch, who, with her partner David Rawlings, sang captivating duets in front of a mesmerized crowd. No one knew that because of flight delays, Welch only made the show with 30 seconds to spare — and that was only with the help of a Newport policeman, who spotted her car in a traffic jam and escorted her to the festival grounds in time. Her lovely performance was one of 32 sets at Newport Folk that were our gift to you this year.

Months before pianist Vijay Iyer's Historicity became the most talked-about jazz record of the year, his trio was the very first act on the Harbor Stage at 2009's Newport Jazz Festival. Slightly after noon is a bit of an early start as far as jazz goes, but the group clearly came ready to play, as you can hear in this downloadable concert recording. It's more or less a preview of Historicity: Along with a few Iyer originals, the band reinvented iconic songs, be they "Somewhere" from West Side Story, "Mystic Brew" from Ronnie Foster (as sampled by A Tribe Called Quest) or "Dogon A.D." by Julius Hemphill. Busy-bee drummer Marcus Gilmore, low-end theoretician Stephan Crump and Iyer, a uniquely textured pianist, stunned the Newport crowd — and we're delighted to offer you some of their magic.

Dan Deacon At The 9:30 Club In Washington, D.C.
Bob Boilen

I'd never seen anything like it. Dan Deacon's show was part rock concert and part little kid's birthday party. Deacon had the entire audience create a sort of snaking London Bridge, with every person in that crowd forming a human chain that spanned from the stage to the top balcony, and it all happened in time to his pulsating hypnotic sounds and a big band — that's just one of the audience participation-numbers. For the finale, the entire band was passed around the crowd, their floating bodies bathed in white light, and still the music frenetically played on. The time-lapse video I shot captures the night and compresses it into just about five crazed and joyous minutes.

After seeing a great live show, I always get this itch to re-listen to that band's albums and re-create its best moments in my head. One of the best concerts I witnessed this year was St. Vincent at the Black Cat in Washington, D.C. — one we were lucky enough to webcast. It was a great showcase for Annie Clark's stunning voice and the material on her latest album, Actor, one of my top picks from 2009. But it was her killer guitar work and skillful shifts in dynamics that won me over that night. Her band was uniquely forceful, building her intricately arranged songs into fierce cacophony and blissful noise. This show, more than any other, has been on constant repeat during my morning commutes throughout the year.