Accessibility links
Tamales For Christmas Are A True Texas Tradition Forget the fruitcake and nix the nog. In Texas, it wouldn't be Christmas without tamales. Across the state, and elsewhere in the Southwest, families gather during the holiday season for a tamalada, or traditional tamale-making session. The event combines a social gathering with hours and hours of cooking.

Tamales For Christmas Are A True Texas Tradition

Tamales For Christmas Are A True Texas Tradition

A Tradition of Texas Tamales

Forget the fruitcake and nix the nog. In Texas, it wouldn't be Christmas without tamales.

While shoppers from Washington to Maine swarmed the malls the day after Thanksgiving, many Texans were lining up to order — or make — Christmas Eve tamales. The corn masa-and-meat bundles — individually wrapped in corn husks and then steamed — are part of the traditional Mexican celebration of las posadas, which commemorates Mary and Joseph's search for shelter before the birth of Jesus.

Rhett Rushing, folklorist at San Antonio's Institute of Texan Cultures, said tamales have been traditional Christmas Eve fare for centuries because they're portable, easy to store and inexpensive to make for large gatherings. 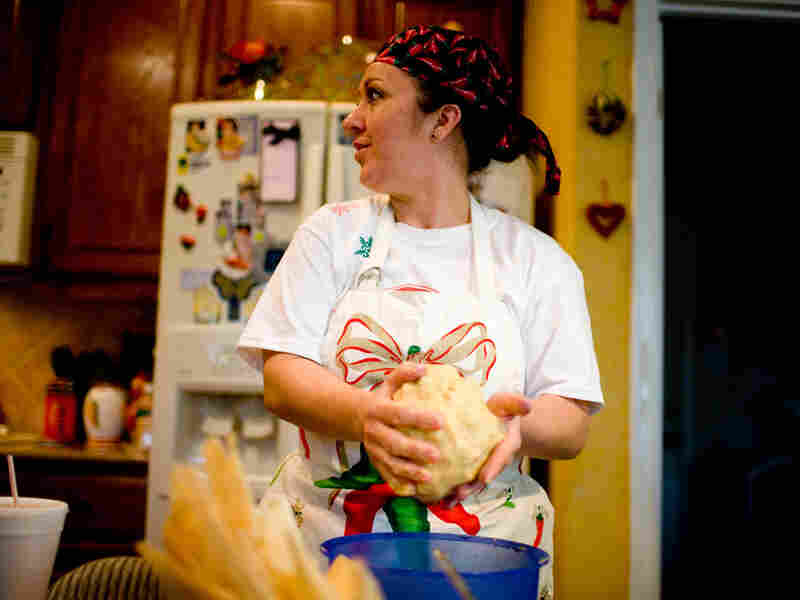 Gina Guereca remixes a bowl of masa, which she purchased from a molina, or mill. Katie Hayes for NPR hide caption 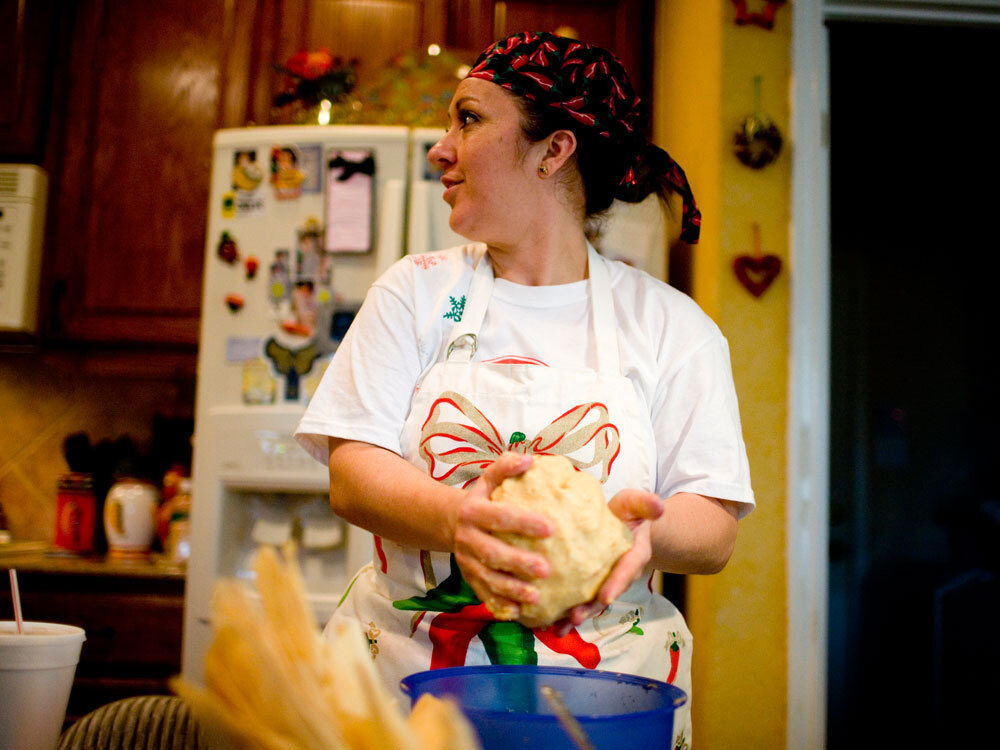 Gina Guereca remixes a bowl of masa, which she purchased from a molina, or mill.

Through the years, the preparation of the labor-intensive food became a social event, called a tamalada, as womenfolk from ranches across Mexico and what's now the American Southwest gathered to prepare the Christmas Eve feast.

"By the time the day was over and the tamales were made, the family would be caught up, the arguments resolved, differences aired," Rushing said. "It wasn't just about the masa and the meat. It was the love and the tears."

For San Antonian Gina Guereca, it's also about memories — preserving old ones and creating new ones.

"I never make tamales that I don't think of my mother. I was maybe in the fourth grade, and I can remember her in the corner of our little kitchen spreading hojas [corn husks] while my dad watched," Guereca, 43, recalled.

As a young girl, Guereca helped out with small tasks — cleaning the husks and preparing the chiles — before taking her place at the stove. Virginia De La Garza, Guereca's mother, concentrated on teaching technique, rather than a recipe.

"Anytime I asked how much, she would just say, 'un poquito,' ['a little'] or 'pruebalo hasta que sepa bueno' ['try it until you know it's right']," Guereca said, adding that her mother had no written instructions.

In the early 1990s, Guereca got her chance to be chief tamalera, or tamale maker, when she and her Marine husband, Simon, took the Texas tradition to Hawaii. At first, Guereca thought she could fall back on the experience of some older Hispanic wives at the Kaneohe Bay Marine Corps base.

But she quickly discovered that tamale-making was rapidly becoming a lost art. She was the only one of her group with any experience at all.

That Christmas, Guereca called her mom for some long-distance advice.

"I would call and ask for recipes, and she would say, 'Tu si eres mujer, mi hija,' ['You're a real woman, my daughter']," Guereca recalled. "My mom showed a lot of pride when I started making tamales."

Guereca now gathers her family and friends for an old-fashioned tamalada each year, in an effort to continue the tradition handed down by her mother.

This year, about a dozen friends and neighbors gathered at the Guereca home on the Saturday before Christmas for a daylong tamal-making party with music, food and plenty of gossip.

For Guereca, the work actually began earlier in the week when she started assembling the essential ingredients –- the corn husk wrappers and the pork, chicken, beans, chilies and spices that would be made into savory fillings.

The day before the tamalada, Guereca and neighbor Erin Clarkson cleaned the husks of fibers and dirt, put them into ice chests and covered them with water so they'd be clean and pliable. Later, Guereca seasoned the meats and pinto beans and started them cooking in Crock-Pots.

On Saturday, the Guerecas were at the molino, or mill, by 6 a.m. to buy prepared corn dough, or masa. By going to the molino — where the dried corn is ground and cooked to the right consistency, and the spices and lard are added –- they shaved hours off a process that still took more than half a day.

Marci Gonzales, whose father owns La Bandera Molino in San Antonio, said Guereca is one of an increasing number of working women who are trying to keep the art of tamal-making alive.

"Preparing the masa is the most time-consuming part," Gonzales said. Working women "want the tradition to keep going," and buying the prepared dough saves time and energy.

Back at home, the band of tamaleras formed an assembly line in the Guereca kitchen, with some of the cooks chopping — chilies, onion, garlic and meat — while another group prepared the bean, pork and chicken fillings, and others slapped the dough onto husks.

The whole time, you're not only working and making the tamales, but you're visiting with your friends and eating.

Tammi Secrest, a guest at the "tamalada"

With Christmas music playing in the background, the group wasted no time catching up.

One of Simon Guereca's longtime friends had gone bald. Kids had graduated, friends had gained weight and others had gotten in shape.

Then, there was gossip. "We talked about golf, then, of course, Tiger Woods. Everyone had an opinion," Guereca said.

"A bunch of women sitting around — we're like hens," said Tammi Secrest, the Guerecas' next-door neighbor. "The whole time, you're not only working and making the tamales, but you're visiting with your friends and eating."

At the end of the assembly line, the men wrapped and labeled the different types of tamales — pork, bean, chicken — and Simon Guereca manned the bar. The jokes flowed as freely as the wine.

Later in the evening, the Dallas Cowboys kept the group entertained. By the end of the night, the group had made 60-dozen tamales. The bounty was divided, and each family took home a specially prepared Christmas Eve dinner.

It was past midnight when Guereca and her husband plopped into bed.

"It's a lot of work, but it's fun. We talked about everything. It's kind of like being on The View, but we're not scripted," she said laughing, and then added, "I want to keep the tradition alive."

In 2008, Guereca finally put her collection of "how-to" instructions, photographs and recipes pieced from experience and books into a scrapbook that she gave to friends at the first tamalada after her mother's death.

"By enthusiastically embracing, sharing in and appreciating this centuries-old tradition that my mother taught me, you have helped me honor her memory," Guereca wrote on the scrapbooks.

Secrest, an Indiana native, said her first tamalada was a major culture shock, but she considers it an honor to be invited. "Getting a peak into what she grew up doing, her family tradition, was very special," she said.

Gabby Guereca, the Guerecas' 20-year-old daughter, said she'll carry on the tradition when she has her own family.

"It's a way I know we'll always keep in touch," she said.