Accessibility links
For Sale: 'Lost In Space' Robot Replicas As a child, Mike Joyce dreamed of two things: being an astronaut and owning his own robot from the show Lost in Space. Now, he makes and sells them at $25,000 a pop. Building the robot started as a hobby, and then selling these replica robots became a business. He's sold 53 so far. 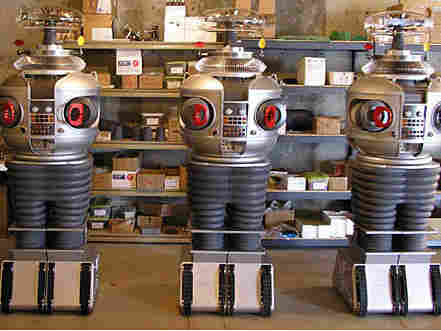 As a child, Mike Joyce dreamed of two things: being an astronaut and owning his own robot from the show Lost in Space.

Now 48, the retired Air Force pilot is sad he hasn't been to space. But Joyce beams as he shows off the features of the Lost in Space robot replica he designed and built by hand.

And, of course, the robot says "Danger, Will Robinson" as well as other catchphrases. According to Joyce's Web site, his robots include 500 voice tracks by Richard Tufeld, the voice of the original robot.

Building the robot started as a hobby, and then selling these replica robots became a business. Joyce's factory is in his home's basement. Surprisingly, Joyce is able to build these highly detailed, 275-pound robots far from any support services deep in South Dakota's Black Hills Forest.

Even though Joyce makes a living building these replicas and has a model of the show's rocket in his backyard, he doesn't consider himself an obsessed fan.

"Some people would say if you had a life-sized model of the Jupiter II in your backyard, you're an obsessed fan, I suppose," Joyce says.

Either way, Joyce isn't alone. He's already sold 53 robot replicas. Each can take two months to build — and they sell for $25,000.

Richard Molnar bought one of them and is thrilled to own it.

"My robot still appeals to me because the 21st century turned out to be crushingly boring, and I still do not have a flying car," Molnar says.

Joyce still dreams of flying to the moon, so much so, he's now investing in another project. This one is about real space science and aims to land a robotic rover on the moon.