Accessibility links
Attorney General Has a Second Date with Congress Attorney General Alberto Gonzales testifies Tuesday morning before the Senate Judiciary Committee on Capitol Hill. In April, Gonzales' performance before that committee was panned, but he managed to keep his job. Some question the value of a follow-up hearing.

Listen
Attorney General Has a Second Date with Congress 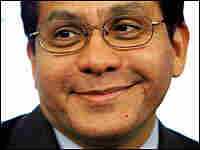 It is an undeniably strange situation, as even the protesters in front of the Justice Department acknowledge. Members of the group Code Pink have been chanting in front of the attorney general's office on Mondays and Fridays for three months. But protester Liz Hourican admits that, "Realistically, I don't imagine he'll resign."

Back in April, Gonzales had another hearing before the Senate Judiciary Committee. Most people said his job would depend on his performance at that hearing. But everyone except the president panned his performance, and Gonzales kept his job.

Now, three months later, Gonzales goes into another hearing where he is expected to perform in more or less the same way. This time, however, nobody thinks his job is at stake.

Republican lobbyist Ed Rogers says he is not particularly impressed with the attorney general, but he doesn't see the point in Congress holding this hearing, either.

"Nobody thinks this is consequential," Rogers says. "Nobody thinks the attorney general's job is on the line, so it's just kind of going to be more of the same, and the Democrats and their sympathizers will have more to snicker about, but nothing will come of it."

Senate Judiciary Committee Chairman Patrick Leahy (D-VT) defends his decision to call the attorney general to testify again. Leahy said in an interview, "I would not be doing my duty if I didn't get to the bottom of this and hopefully point out enough so the next attorney general, whoever he or she might be, will never make these mistakes again."

After the last hearing, Leahy criticized Gonzales for repeatedly answering questions with, "I don't know," and, "I don't remember."

This time, Leahy sent Gonzales a list of questions in advance.

"He's had plenty of time to look them over," Leahy said, "so there'll be no excuse for saying, 'I don't know, I don't remember.' "

The questions address a new set of apparent contradictions that have emerged since the attorney general's last hearing.

For example, Gonzales told senators in April, "I haven't talked to witnesses" about the dismissal of U.S. attorneys.

Then the Justice Department's former White House liaison described an "uncomfortable" conversation with Gonzales in which "he laid out for me his general recollection" about the firings. Senators are expected to ask about that exchange.

Another apparent contradiction concerns the National Security Agency's domestic spying program. Gonzales once told Congress that he didn't know of any major dispute within the Justice Department over the program. Then former Deputy Attorney General James Comey said there was a big dispute over it. In fact, Comey said, several Justice Department leaders considered resigning over the dispute. The incident hinged on a confrontation at Attorney General John Ashcroft's hospital bed, and Comey says Gonzales was at the hospital bed, representing the president as White House counsel.

Harvard Law Professor David Barron says that even if Gonzales can't sort out these contradictions, there is value in holding the hearing.

"If you have very serious questions about the rule of law and the confidence in the department, and the president simply disregards them," Barron says, "for no one to continue pushing and to make it clear that a certain standard is expected of the department would, I think, be a very serious loss for the country."

The Justice Department on Monday released a written opening statement for Gonzales. It does not address the questions sent last week by Leahy. Gonzales does, however, say he plans to remain attorney general, in part to work on "reinforcing public confidence in the department."