Accessibility links
Colonial Dinner Parties Meant Cocktails, Conversation Guests at the governor's dinner table in 18th century Virginia had one thing in common with even the poorest households — a love of drink.

If you were one of the lucky few in 18th century Virginia to be invited to the royal governor's home for dinner, you'd better bring sparkling conversation to the table. If you just sit there and stuff your face, you'll never be invited back.

So says Frank Clark, the supervisor of the Department of Historic Foodways at Colonial Williamsburg. Clark says food played a leading role in the social lives of Virginians in the 1700s, and an elaborate feast at the governor's table sent a welcoming message.

The governor "is paying for this food out of his pocket," Clark explains. "So if ... he's putting out all this food, it's a clear indication that he wants you to be happy."

Although dinner was the governor's responsibility, all visitors were required to bring lively atmosphere to the table, whether in the form of township news, political discussion or even demonstrating a new dance step.

For the very wealthy, dinner meant variety, Clark says. A royal governor might serve six or seven meats, plus side dishes, depending on the number of guests, and follow those with a very light dessert course. Such sweets could include candied fruits or cake.

Less-wealthy Virginians also used dinnertime as a chance to tell stories and share the day's news, even though their meals were simpler. The gentry class tried to follow the example set by the rich but served more basic, "meat-and-potato" meals, Clark says, with few fancy dressings and sauces. With very little cooking equipment, the poorest households usually prepared one-pot meals composed mostly of cornmeal. 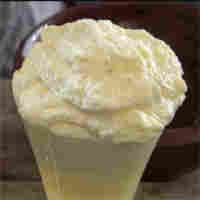 Regardless of class, all colonial Americans had one thing in common. They loved to drink. Not water, which wasn't reliably clean from one day to the next. Alcohol, on the other hand, was thought to cure the sick, strengthen the weak, enliven the aged and make the world a better place. Beer and hard cider were very popular, as were drinks with such names as rattle skull, bogus, toddy, flip and syllabub — which Clark showed NPR's Liane Hansen how to make using wine, cream, sugar and lemon juice.

Fermented beverages such as beer and wine were considered nutritious and healthy, Clark says. "Obviously much healthier than water, because no one ever gets fat drinking water. Plenty of people can get fat drinking beer."

Men, women and even children consumed wine, beer or hard cider all day long. However, early Americans were wary of hard liquors, including gin, rum and whiskey.

"It's the distilled spirits that are the dangerous ones and the ones that people worried about consuming too much of," Clark says.

At least one well-known character from that time may have had a little too much of a supposedly nutritious fermented cocktail. Little Miss Muffet sat on her tuffet, eating her curds and whey before a spider scared her off. Clark claims she may actually have drunk too many syllabubs.

"That's why she saw the spiders — too many syllabubs and all that wine. Gotta be careful," Clark says. "That's the point of the rhyme: It's to remind the parents that your children are drinking alcohol. It's safer than water, right? But you don't want them to have too much, or they'll start seeing spiders like Little Miss Muffet."