What do the two movies Sherlock Holmes and The Imaginarium of Doctor Parnassus have in common? The actor Jude Law for one thing. Midgets for another. But the audiences will likely not get the two movies confused.

SIEGEL: "Sherlock Holmes" and "The Imaginarium of Doctor Parnassus." Our critic Bob Mondello says one has mystery, the other has magic, and both have Jude Law.

BOB MONDELLO: Jude Law is just the start of the parallels. Both also feature midgets, 19th century atmospherics, near-identical establishing shots of St. Paul's Cathedral - probably means I shouldn't have seen them on the same day. But it's not as if anyone would ever confuse them. "Imaginarium of Doctor Parnassus" is elegant and weird, whereas "Sherlock Holmes" is rock-em-sock-em and loud.

MONDELLO: (As Irene Adler) My God!

MONDELLO: (Dr. John Watson) Holmes, where are you going?

MONDELLO: Guy Ritchie, who usually directs sense-assaulting gangster flicks, tackles a detective franchise known for brain-teasing clues by turning Sherlock Holmes into an action hero, and his story into a cross between "The Da Vinci Code" and "Fight Club," complete with both the former's pentagrams and the latter's extreme boxing matches. Didn't know Sherlock Holmes could box? Well, as played by Robert Downey Jr., he's a regular prizefighter, mostly so that when our arrival pugilists spits at him, the director can freeze the action and let his super sleuth analyze how to pulverize the guy.

MONDELLO: Then the director shows it in real time.

MONDELLO: Also featured are a gorgeous girl, an indecipherable but presumably nefarious plot, a villain who comes back from the dead, a chase up a still- under-construction tower bridge, and Jude Law's amusingly annoyed Dr. Watson.

MONDELLO: (Dr. John Watson) I've never complained. When do I complain about you practicing the violin at 3 in the morning or your mess, your general lack of hygiene or the fact that you steal my clothes?

MONDELLO: Call it a pumped-up, anachronistically modern Sherlock Holmes for the attention-deficit crowd. "The Imaginarium of Doctor Parnassus," on the other hand is deliberately old-fashioned, the story of an aging storyteller magician who has a magic mirror you can pop through to another world. Dr. Parnassus, played by Christopher Plummer, also has a pact with the devil, played by Tom Waits - a pact that is, shall we say, alarming.

(SOUNDBITE OF MOVIE, "THE IMAGINARIUM OF DOCTOR PARNASSUS")

MONDELLO: (As Dr. Parnassus) Tell me what you want...

MONDELLO: The devil has already won the magician's daughter in a previous bet. But he offers Dr. Parnassus a chance to save her using his imaginarium. Whoever gets the first five souls to cross over, wins.

(SOUNDBITE OF MOVIE, "THE IMAGINARIUM OF DOCTOR PARNASSUS")

MONDELLO: (As Dr. Parnassus) The first five? No tricks?

MONDELLO: (As Dr. Parnassus) No cheating?

MONDELLO: (As Mr. Nick) No cheating.

MONDELLO: It's a high-stakes deal, with the magician's daughter in the balance, played out in a lot of trips through that looking glass to a fabulously digitized fantasy world - also played out through one very deft bit of movie magic involving the late Heath Ledger. Ledger plays a con man who leads folks into the mirror and the imaginarium's dreamscape. The character is pretty central and when Ledger died before he could shoot his fantasy sequences, director Terry Gilliam had to scramble to preserve his final performance. The scenes on the reality side of the mirror had been completed. So, now when Ledger pops into the mirror, out the other side, in an identical white suit, pops Jude Law or Colin Farrell or Johnny Depp. 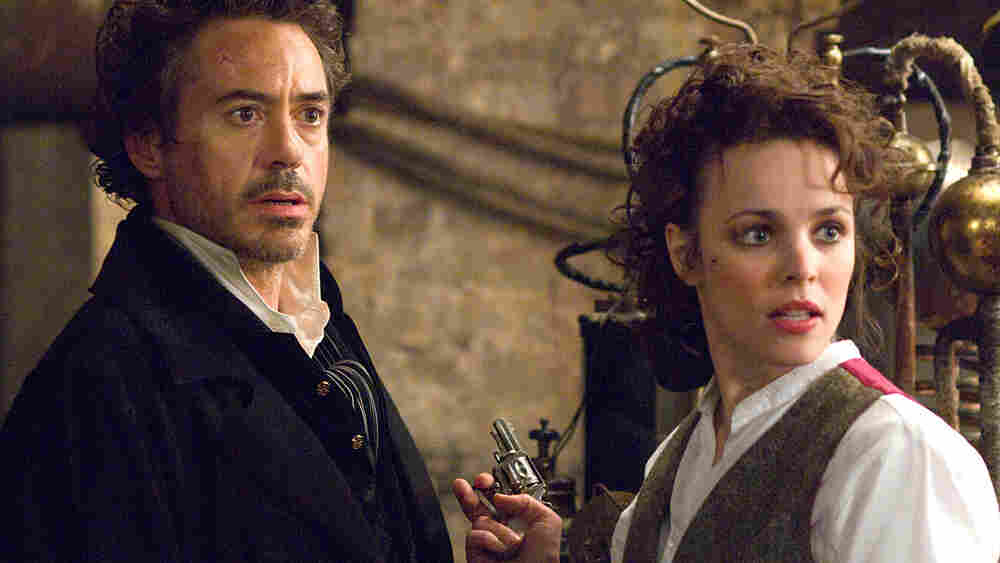 Hard Target: Guy Ritchie's Sherlock Holmes update (with Robert Downey Jr. and Rachel McAdams) looks to put a bullet in the idea of the deerstalker-wearing detective — though who Ritchie's hero is, exactly, remains something of a mystery. hide caption 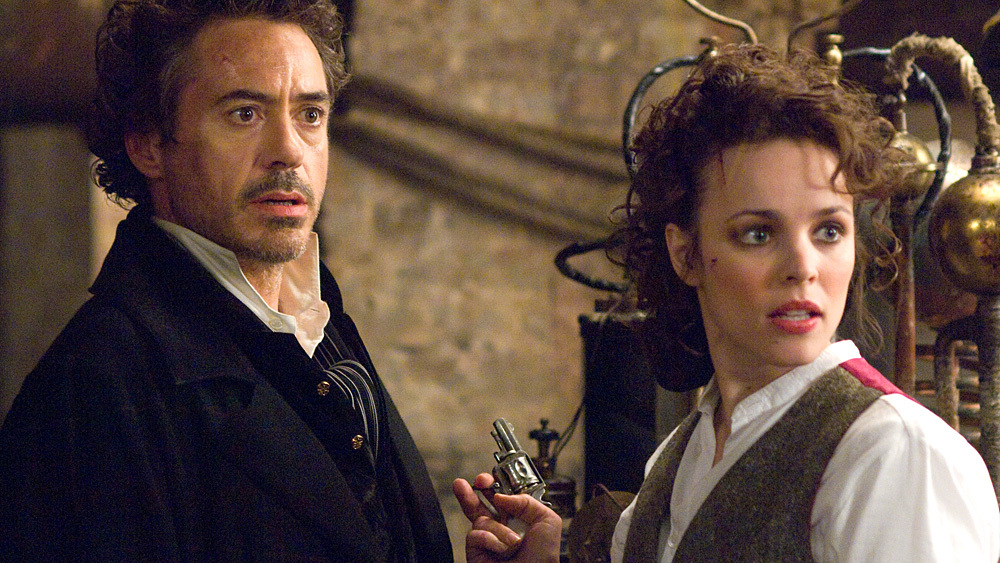 Hard Target: Guy Ritchie's Sherlock Holmes update (with Robert Downey Jr. and Rachel McAdams) looks to put a bullet in the idea of the deerstalker-wearing detective — though who Ritchie's hero is, exactly, remains something of a mystery.

Rated PG-13 for violence and action

'When Do I Complain?'

Two quasi-literary film fantasies — fresh takes on deductive forensics and Faustian bargains — arrive this weekend on the big screen. Guy Ritchie's Sherlock Holmes has clues, Terry Gilliam's The Imaginarium of Doctor Parnassus has magic, and both have Jude Law.

Actually, the similarities don't end with Law. Both films also feature dwarfs, 19th-century atmospherics, and near-identical establishing shots of St. Paul's Cathedral. Probably means that I shouldn't have seen them on the same day.

Not that anyone's likely to confuse them: Where Imaginarium is elegant, thought-provoking and intriguingly weird, Sherlock Holmes is just rock-'em-sock-'em, commercial and exhaustingly loud.

Ritchie, who usually directs drug-fueled, sense-assaulting gangster flicks (Snatch, Lock, Stock and Two Smoking Barrels), tackles the Arthur Conan Doyle detective franchise by turning a sleuth known for cerebration and observation into an action hero, and putting him in a story that's a cross between The Da Vinci Code and Fight Club — complete with the former's pentagrams and the latter's extreme boxing matches.

You didn't know Sherlock Holmes could box? Well, as played by Robert Downey Jr., he's a gym-toned prizefighter, throwing punches before cheering yobs in the sort of down-'n'-dirty London venue once used for bearbaiting.

"Why?" you ask, your sleuthing senses tingling. Partly because of Conan Doyle's interest in a protagonist with a mix of physical and intellectual gifts, but mostly, alas, because of Ritche's interest in playing camera tricks — first freezing the action as his hero analyzes in slo-mo how best to pulverize a rival pugilist, then speeding up once Holmes has set his strategy, so the teen male audience can get its bone-crunching jollies in real time.

Sequences set atop a still-under-construction Tower Bridge are similarly presented as much for the director's benefit as for the sleuth's (or the story's). There are explosions, fires, fogs and much dangling from on high. Also a comely femme fatale (Rachel McAdams), a back-from-the-dead villain (Mark Strong) who hatches an indecipherable but presumably nefarious plot, and Law's amusingly annoyed Dr. Watson, who's engaged to a strong-willed blonde, but who bickers with his sleuthing partner as if the two of them were an old married couple.

Perhaps because Law and Downey are far too smart for this material — and also because a visual stylist like Ritchie hasn't a clue as to how else to make language comic — the two leads have been allowed to speak their lines as if they were channeling not Conan Doyle, but his contemporary Oscar Wilde. It doesn't really work, but it's of a piece with the rest of this overproduced, underthought trifle.

In short, Ritchie's come up with precisely what you'd expect of him — a pumped-up, anachronistically modern Sherlock Holmes designed for the ADD crowd. Expect a sequel. Or six.