Accessibility links
The Jazz Loft: In The '60s, A Musicians' Building In Flux The arrival of a new decade heralded new styles of music, and new challenges, for the jazz artists who met up at 821 Sixth Ave. in New York. And for the struggling photographer who documented it all, it was also the end of an era. 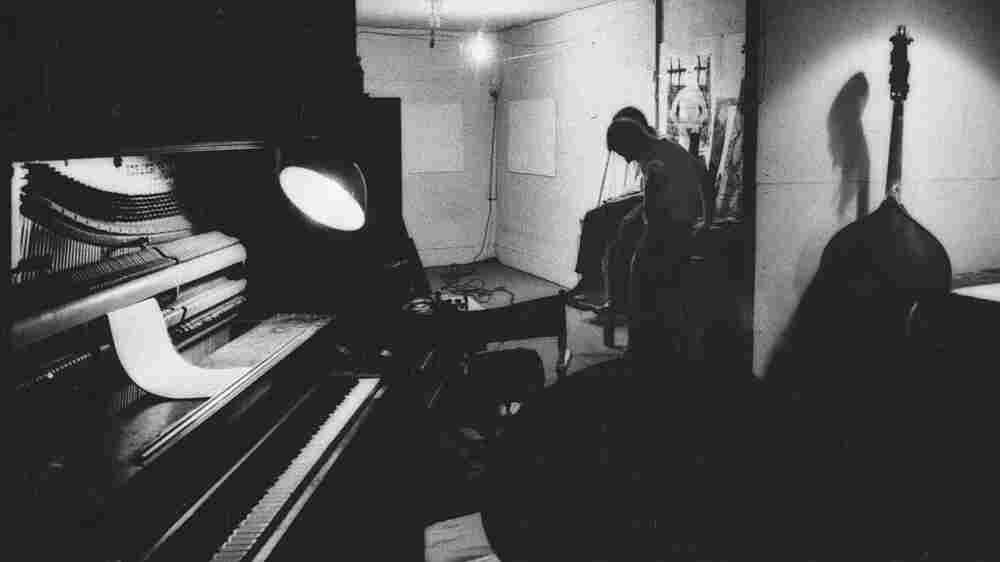 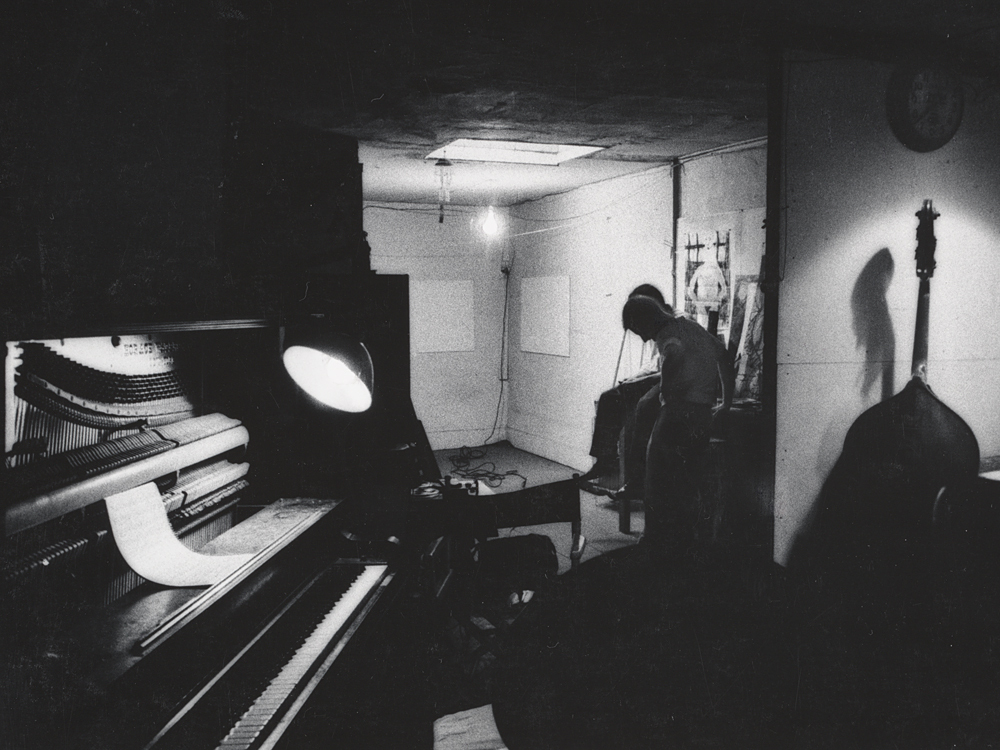 By the mid-1960s, the jazz scene in New York had changed from when W. Eugene Smith first moved into 821 Sixth Ave., and his taping slowed down. 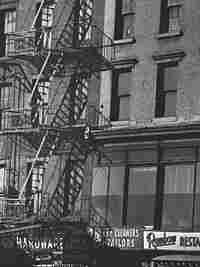 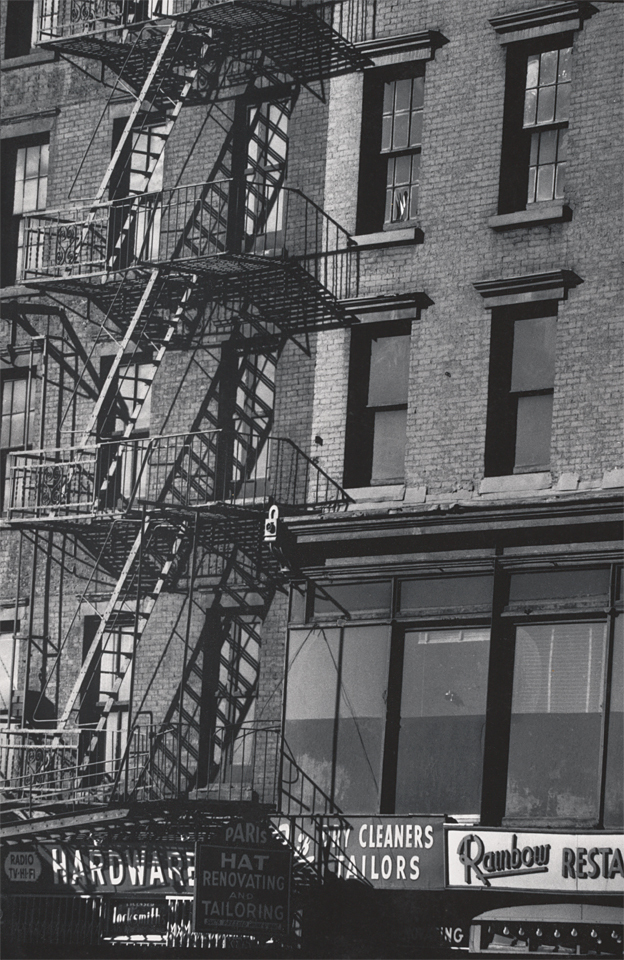 The facade of the Jazz Loft, pictured during Eugene Smith's residency.

By 1963, photographer W. Eugene Smith had achieved something phenomenal in the dingy, bare-bones loft space at 821 Sixth Ave. For six years, Smith had been quietly and exhaustively documenting, in pictures and sound, the large, unwieldy loft community.

Bass player Bill Crow was there a lot. As open and spontaneous as the place was, he says, there was a kind of order to it.

"Everybody had their own value and we all knew what it was," Crow says. "I would show up; I was willing to bring a bass there and climb up all those stairs and play as long as they wanted to play."

It was hard not to notice, though, that by the early '60s, something was dramatically different. To the regulars in the Jazz Loft, one of the most obvious changes was in the music itself. Pianists Dave Frishberg and Dick Katz felt it, in their own ways.

"It was this period where rock took the ball and affected the jazz world," Katz says. "Because these rock guys, it was really about — they were theater. It wasn't about the music. That's the way I see it."

Jazz had its own readjustments. In one of Smith's tapes from 1963, trumpeter and bandleader Don Ellis addresses his group just before a jam session. They follow his instructions and begin to play what might be called free jazz.

"It was an entirely different kind of music," says jazz musician and teacher Bill Kirchner. "The avant-garde became one of the biggest focuses of jazz of the 1960s."

Pianist Paul Bley remembers it as a transitional moment, coming directly from Charlie "Bird" Parker. His impact was still being felt years after his death in 1955.

"Bird did it all," Bley says. "Bird played everybody's part, everybody's instrument better than they did and summed it all up. And that was the problem; that's when free jazz came about because they said, 'Geez, what's next, what comes after Bird? The guy did it all.' And so that was the conundrum we faced in the early '60s in Eugene Smith's loft. How could you be recognizable?"

Washington University professor Gerald Early, author of One Nation Under a Groove, says that a certain type of predictability had crept into jazz — much like with any form of art.

"It was always, I suppose, against this kind of predictability that you kept getting innovation in the music to try to stave off predictability," Early says.

Predictability was gone, too, from life outside the loft. Smith had his radio on frequently, and his tape recorders picked up broadcasts from up and down the dial.

By the end of 1963, when the radio was almost always on, it was beyond unpredictable. With the assassination of President John F. Kennedy, the unthinkable had happened.

As for Smith, he was going through his own crisis. In one of the last tapes recorded in the Jazz Loft, Smith — having over the years resorted to alcohol, amphetamines and other solutions — was now having his astrological chart read by Eleanor Bach. It was December 1967.

"I think he really became down-and-out in the mid- to late '60s," Stephenson says. "He ran out of money."

"There weren't as many musicians coming through," he says. "So I think it was a combination of the scene changing and him being down-and-out personally that cause this to stop. I don't think he made a conscious decision: 'I'm going to stop doing this now.' He just sort of moved on."

His son, Pat Smith, received frequent cries for help from his father, increasingly alone in the now less-populated Jazz Loft.

"He was going through a period of depression, and he would call up in the middle of the night, and we would have to go hold his hand," Pat Smith says. "He was always threatening to commit suicide back then — I'm not sure he ever meant it, or he just needed attention. But we did make some midnight runs down there."

W. Eugene Smith was evicted from 821 Sixth Ave. in 1971 after lengthy disputes with the landlord there. Soon after, he poured his heart into one of his most dynamic and notable projects: Minamata, a photo essay about the deadly effects of industrial contamination in the water of a small Japanese town. Smith died of a stroke in 1978.

"Barely. I walked by there the other day," says Sharon Zukin, author of Loft Living, a book that studies loft history. "And I was a little surprised that it is still standing. It looks as though it's really living on borrowed time."

The building is currently owned by a family that imports and manufactures wigs.

"From the outside it looks like a residential tenement," Zukin says. "It's a relatively narrow five-story building, no elevator."

But it's filled with memories, from the ground floor to the top.

Teddy Charles: "We were just going in and having these really freewheeling, swinging jam sessions."

Dave Frishberg: "You just showed up, any time of day or middle of the night ..."

Nancy Overton: "But everybody loved it; it was just the place."

821 Sixth Ave. The forgettable address of a nondescript building that was, for some number of years, the place to be.