Accessibility links
Libya Frees Condemned Medical Workers Six foreign medical workers who had been sentenced to death in Libya are free. The five Bulgarian nurses and a Palestinian doctor flew out of Libya to Bulgaria aboard a French jetliner accompanied by the wife of French President Nicholas Sarkozy.

Six foreign medical workers sentenced to death in Libya are free thanks to a deal with the European Union. The five Bulgarian nurses and a Palestinian doctor flew out of Libya to Bulgaria aboard a French jetliner accompanied by the wife of French President Nicholas Sarkozy.

The medical workers were convicted of intentionally infecting hundreds of Libyan children with HIV. They have maintained their innocence. 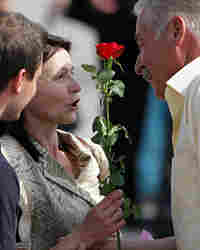 Bulgarian nurse Valentina Manolova Siropulo is offered a rose by an unidentified relative outside the French presidential plane after her arrival at the Sofia airport. Dimitar Dilkoff/AFP/Getty Images hide caption

Six foreign medics convicted of infecting hundreds of Libyan children with HIV were free Tuesday after the European Union and Libya struck a deal to end their eight-year ordeal.

The five Bulgarian nurses and a Palestinian doctor have been imprisoned since 1999, when Libyan officials accused them of deliberately infecting more than 400 Libyan children with HIV. They have maintained their innocence, but said they were tortured into confessing.

French first lady Cecilia Sarkozy and the European Union's commissioner for foreign affairs, Benita Ferrero-Waldner, were on board the plane that flew the six from Tripoli, Libya, to freedom in Sofia, Bulgaria.

In return for the release, Libya and the European Union agreed to develop a "full partnership," with the Europeans promising a package of aid to develop Libyan hospitals and other infrastructure, Libyan Foreign Minister Abdul-Rahman Shalqam said.

Nurse Kristiana Valcheva told reporters that they had kept alive the hope of freedom throughout more than eight years in prison.

"We were afraid even to say aloud what we dreamed about," Valcheva said with tears in her eyes.

"Now I still can't believe that I am standing on Bulgarian soil. We were told the news at 4 o'clock in the morning, and we left the jail at quarter to six to board the plane," she said. "Now I will try to get my previous life back."

The six were originally sentenced to death, but the sentences were later commuted to life in prison. Last week, Libyan officials agreed to a Bulgarian request to allow the six to serve the rest of their sentence at home. Their trip to freedom includes a presidential pardon by the Bulgarian president.

"Led by the firm conviction in the innocence of the Bulgarian citizens sentenced in Libya and fulfilling his constitutional rights, the president signed a decree for pardon and releases them of their sentences," Bulgarian Foreign Minister Ivailo Kalfin said.

Shalqam said the Bulgarian president had the right to pardon the medics.

"According to agreements between the two sides, it is the right of any country after handing over the convicts to either implement the verdict or to pardon them. It is the right of the Bulgarian president to issue this pardon," Shalqam told reporters in Tripoli.

Under the agreement with the EU, the bloc agreed to provide "lifelong treatment" to the infected children, as well as aid to "improve the Benghazi Hospital" where the children were infected, Shalqam said.

The EU also committed to "provide other aid for education, historical antiquities, as well as support for security on Libya's northern and southern borders to combat illegal immigration," Shalqam said.

French President Nicolas Sarkozy said, however, that neither the EU nor France paid money to Libya for the release. He said Qatar mediated the release and hinted that the Gulf country might have had a broader role in resolving the crisis.

He also announced that he and French Foreign Minister Bernard Kouchner will visit Libya on Wednesday in a bid to "help Libya rejoin the international community."

The French presidential palace said the deal included measures to improve the medical care of children with AIDS in Libya.

In Brussels, European Commission President Jose Manuel Barroso said the EU would move to improve trade and political ties with Libya after the release.

He said the 27-nation bloc could move to include Libya in regional trade and aid ties with other Mediterranean countries.

The five Bulgarian nurses traveled to Libya nearly a decade ago, attracted by promises of higher-paying jobs. They were sent through a Bulgarian recruitment agency to al-Fath Children's Hospital in Libya's second largest city of Benghazi. The nurses were arrested the year after their arrival.

Some 60,000 Bulgarians were employed in the country in the 1980s, according to Libyan officials, before the U.N. imposed sanctions in 1993 and the links between the two nations weakened.