Accessibility links
Can Afrobeat Musical 'Fela!' Move The Masses? In 2008, the off-Broadway musical Fela! became one of the most talked-about shows in New York. Telling the life story of Nigerian musician and political activist Fela Kuti, the show made the move to Broadway last month and opened to ecstatic reviews. But will this unconventional theater piece speak to a larger audience?

In 2008, the off-Broadway musical Fela! became one of the most talked-about shows in New York. Telling the life story of Nigerian musician and political activist Fela Kuti, the show made the move to Broadway last month and opened to ecstatic reviews. But will this unconventional theater piece speak to a larger audience?

More From The Director

Bill T. Jones On How Nigerian Generals Used To Go To The Shrine

This album is available for purchase from Knitting Factory Records. 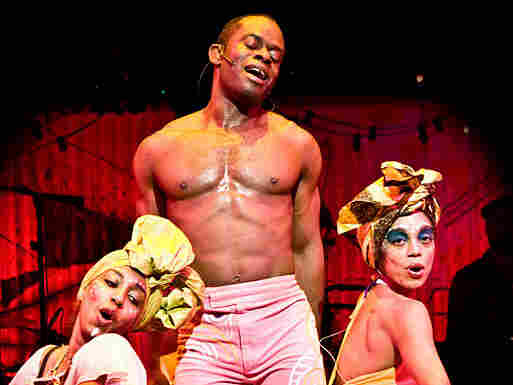 Ben Brantley, chief drama critic for The New York Times, says he was worried about the transition.

"When I heard Fela! was moving to Broadway, I thought, 'That's a mistake.' "

Brantley liked Fela! off-Broadway, but when it moved to Broadway, he changed his mind. He gave the show an all-out rave.

"I think it's pretty much irresistible on Broadway," he says. "And I think what makes it singular is not only that you're talking about a culture based in Yoruban religion and a form of music — Afrobeat — which Broadway has never heard before, but even the way the performers relate to the audience ... They don't sell themselves. There's great energy to them, but there's also a great self-containment. It's like, 'You come meet me. You want to come meet me.' "

It's a good bet that most American audiences have never met the music of Fela Kuti, let alone know about his life or the politics of Nigeria. So it falls on the shoulders of director, choreographer and co-author Bill T. Jones to turn this complicated story into compelling theater. Jones says it starts with the music.

"Fela was, at one point, the most famous musician in Africa," Jones says. "He created this thing called Afrobeat, which was a kind of a recombination of classic jazz. He loved jazz, traditional African music, and American funk and rhythm and blues, all tied together."

Jones says Fela Kuti used that music to protest injustice in his native Nigeria, where the murderous regime arrested him more than 200 times. But Kuti was no saint: He lived the hedonistic life of a rock star. He smoked marijuana; he lived in a compound with 27 women — his "queens" — whom he symbolically married one day.

"I don't know if I would've liked him as a man," Jones says. "But I certainly respect him as a cultural force and an artist."

More Than A Rebel

Jones says Kuti was more than just a bad boy; he also played an important role in the fight for justice in Nigeria.

"I call him a 'sacred monster,' " Jones says, "that any democratically leaning society cannot afford to be without, because he is the one, maybe imperfectly, but he puts his finger on that sore spot. He points at it in impolitic terms. He sets things moving. That's why I'm a fan of his."

To make this artist (who died of AIDS in 1997) live for contemporary audiences, Jones and his design team have turned the Eugene O'Neill Theater into The Shrine — Fela's nightclub in Lagos — complete with colored lights and mirror balls, the Afrobeat band Antibalas onstage, and scantily clad performers dancing in the aisles. Brantley says it works.

"You really do feel as if you're in a nightclub, and a very particular nightclub in a particular place," he says. "You don't feel you've just walked in off Times Square. Theater, at its best, is always supposed to transport us, but this seems to take us to another continent."

Audience members at Fela! aren't allowed to be passive. They sing along with songs by following lyrics projected on the set — and, at one point, they get up on their feet and shake their booty ... or, as Kuti would call it, their nyansh.

Sahr Ngaujah, who plays Kuti, encourages the audience to dance.

"Let's just get everybody to participate in moving their nyansh," he says. "And, in this way, they can look at the nyansh of these women and appreciate it — not just from a voyeuristic, you know, pornographic standpoint, but really appreciate the craftsmanship."

Jones says this kind of participation is a deliberate way to bring audiences into the story.

"They have to participate, which is what I think is brilliant about using music in the way Fela did: Music is the weapon," he says. "So now, we all become connected through the music, and we become connected on a primal level."

When the show gets more political and goes to darker personal places, the audience is ready, Ngaujah says.

"Why not give people candy, if that's what you want?" he asks. "They don't have to know it's full of vitamins and minerals, you know what I mean? If it's sweet, they're gonna eat it anyway."

Candy or not, producer Stephen Hendel knows that developing audiences for Fela! isn't going to be easy: He needs to sell three times as many seats a week as he did off-Broadway. So he's enlisted rapper Jay-Z and superstars Will Smith and Jada Pinkett-Smith to lend their names as producers. He hopes Fela! will become a hot ticket, like it was off-Broadway.

"Suddenly, we were just sold out," he says. "Celebrities calling every day, world-famous musicians. We had no tickets. We'd squeeze them in."

Jones says he's already hearing good word of mouth when he stands at the back of the theater.

"It's a fun evening," he says. "Even with all the things that go down in that second act, I heard some people describing it as 'uplifting' the other day. Uplifting? Well, it ends with people bringing coffins into the theater, but I guess that's ... I've also heard people say, 'It made me want to go out and be an activist!' Well, that's good."

Fela! is currently playing at the Eugene O'Neill Theater on Broadway.