Accessibility links
Reflecting On A Decade Of Stem Cell Research It's been more than 10 years since scientists first showed it is possible to grow embryonic stem cells. Despite political wrangling over the years, scientists have made advances in basic research. Still, there is a ways to go before stem cells can be used to treat disease. 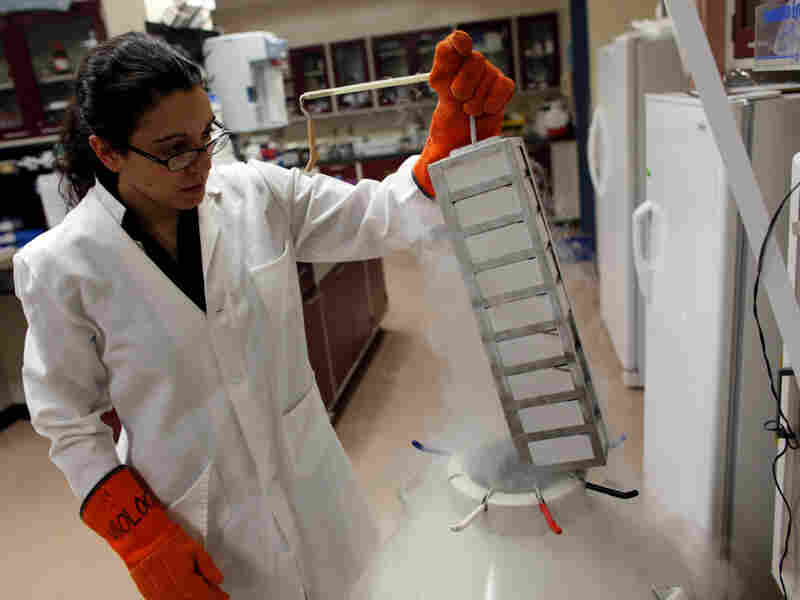 Jessica Dias, an associate research specialist at University of Wisconsin in Madison, removes embryonic stem cells from deep freeze to be thawed before being worked on. The university's scientists, who were the first to experiment with finding cures to neurological and muscular diseases through stem cell research, hope to receive federal funding for their work. Darren Hauck/Getty Images hide caption 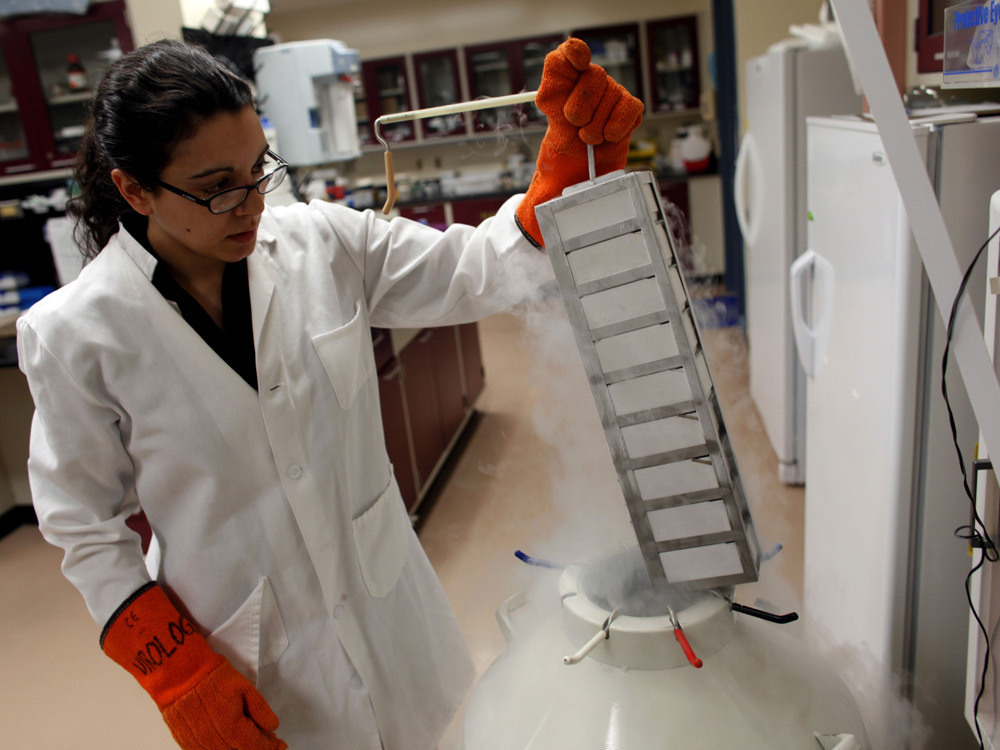 Jessica Dias, an associate research specialist at University of Wisconsin in Madison, removes embryonic stem cells from deep freeze to be thawed before being worked on. The university's scientists, who were the first to experiment with finding cures to neurological and muscular diseases through stem cell research, hope to receive federal funding for their work.

Some say they hold the potential for medical miracles. Others claim they are a moral abomination. Either way, human embryonic stem cells captured headlines during the past decade in a way few areas of scientific research have before.

There is no question that embryonic stem cells have remarkable properties. They can grow indefinitely in the lab, and they can turn into any cell type in the body. But to obtain them, a human embryo must be destroyed.

Scientists first showed that it was possible to grow embryonic stem cells in 1998.

Under normal circumstances, other scientists would have rushed to study the new cells. But because of congressional restrictions, federal money can't be used for research that harms an embryo.

President Bill Clinton decided it was OK to use federal money to study embryonic stem cells once they were growing in the lab, so long as private money was used to create them.

When President George W. Bush took office in January 2001, one of the first things he did was to put that decision on hold so he could reconsider it. In August of that year, the new president came to a rather surprising decision:

"I have concluded that we should allow federal funds to be used for research on these existing stem cell lines, where the life-and-death decision has already been made," he said.

The existing stem cell lines the president was talking about were the dozen or so lines that had already been made using non-federal dollars.

The decision pleased no one. Scientists were upset by the restrictions; critics of the research were upset that the president had allowed any federal money to be spent on embryonic stem cells.

Both sides went to work to change the policy.

In California, voters authorized spending $3 billion over 10 years for embryonic stem cell research. A bipartisan Congress voted to ease federal restrictions, legislation which Bush vetoed. And opponents continued to push for a total ban on the research.

With the election of President Obama, the tide swung toward the scientists. In a White House ceremony in March, Obama said, "With the executive order I am about to sign, we will bring the change that so many scientists and researchers, doctors and innovators, patients and loved ones have hoped for and fought for these past eight years. We will lift the ban on federal funding for promising embryonic stem cell research." 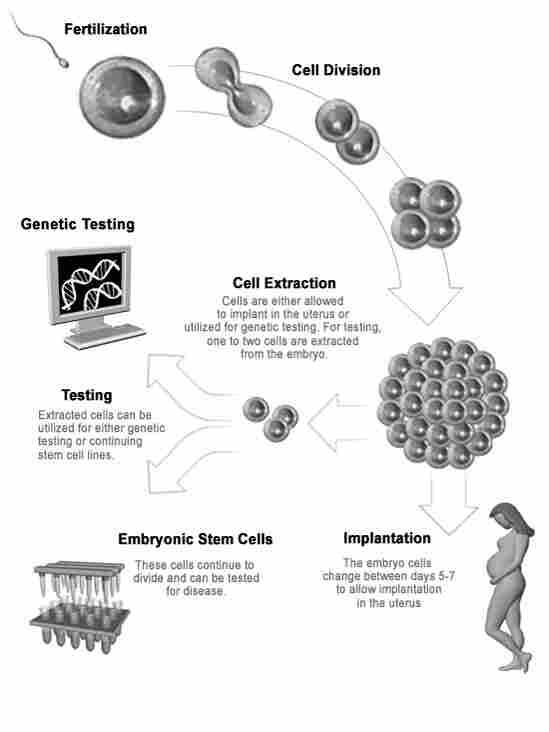 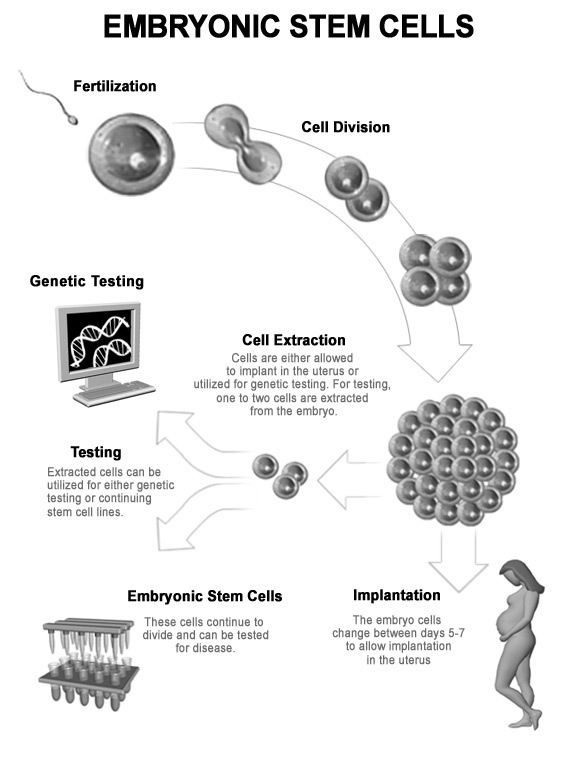 "I think that's still a ways off," Zon says. "Although there are some studies that the FDA is considering, I think we still have to figure out how to make these cells in a more efficient and effective way, and I think that's going to take awhile. You have to remember that the stem cell field is only 10 years old at the moment."

Zon points out that it's frequently two decades or more before new medical technologies find their way into patients.

More immediate, Zon says, is finding new drug therapies using a technique made possible by Japanese researcher Shinya Yamanaka. He found a way to take ordinary skin cells and turn them into cells that behave just like embryonic stem cells, but without destroying an embryo.

When the new technique was announced in 1997, stem cell researcher Jose Cibelli of Michigan State University predicted it would revolutionize the field of stem cell research, and not just because it removed the moral quandary of destroying embryos.

"Anybody can do this procedure," Cibelli said. "It's a very simple recipe. It's a combination of three or four genes, and in a couple of weeks you go from a skin cell to an embryonic stem cell. It's remarkable."

The new technique allows scientists to take cells from a patient with a disease, then convert them into these embryonic stem cell-like cells that can grow indefinitely in the lab.

Zon says he thinks this will change the way scientists understand diseases. But even though these new cells offer great promise, he says, research using cells derived from human embryos is still essential "because these new stem cells from the skin have to be compared to a golden standard. And the golden standard is the embryonic stem cells."

Zon says no matter what kind of stem cells are used, "I think stem cell research is the most exciting field in biology at this point."