Accessibility links
'Romeo And Juliet': Just As You Misremembered It In a new off-Broadway production, Shakespeare's classic is retold through the fuzzy recollections of people who slept through English class. The play is more about how we remember — or thought we remembered — the greatest love story of all time, and less about who said what on that balcony or whatever. 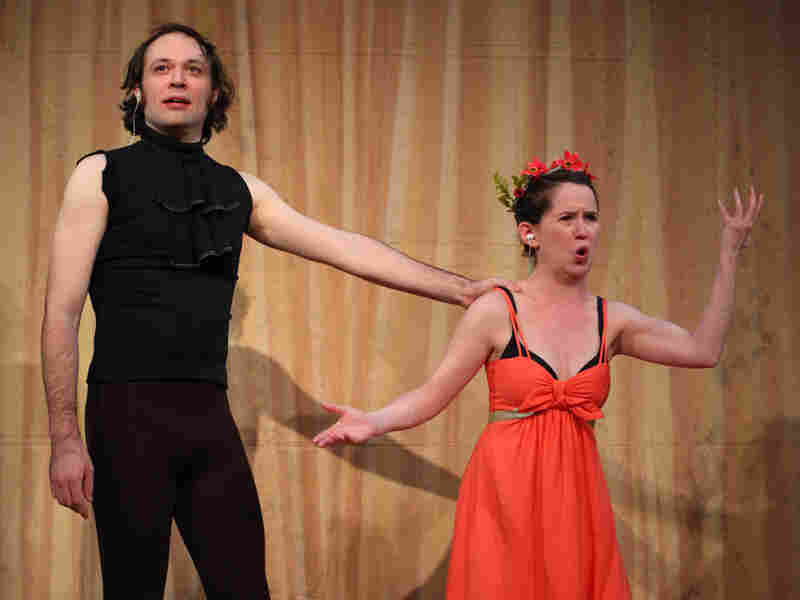 What's In A Name? Or any specific plot point for that matter? Robert M. Johanson and Anne Gridley are Romeo and Juliet in a production directed by Pavol Liska — who has never actually read Shakespeare's play. Paula Court hide caption 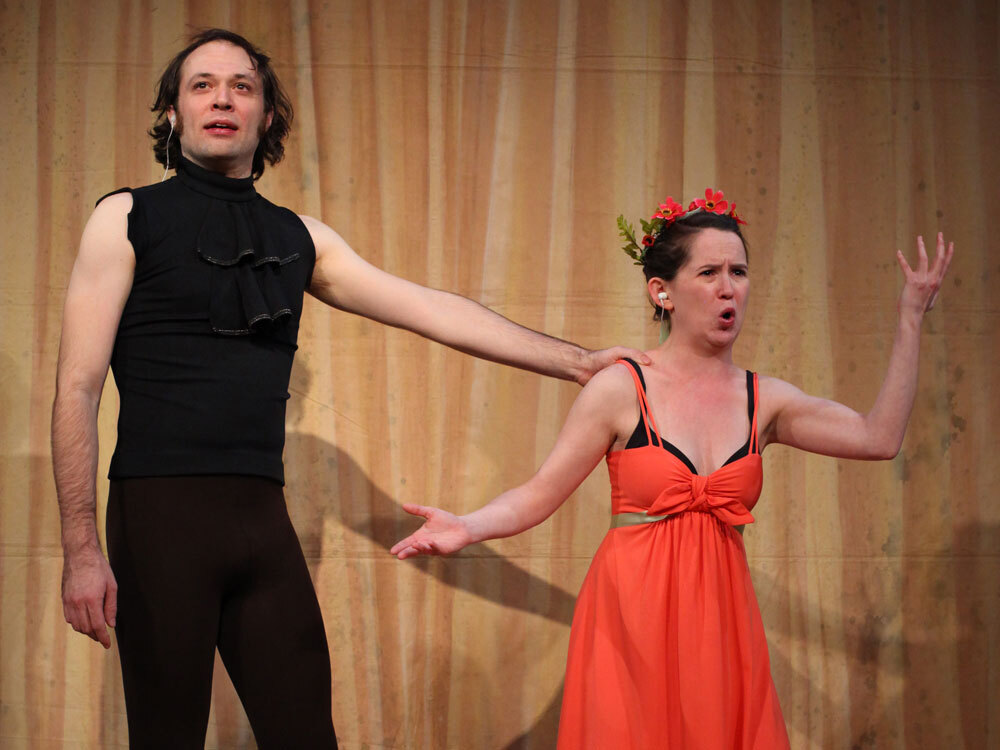 What's In A Name? Or any specific plot point for that matter? Robert M. Johanson and Anne Gridley are Romeo and Juliet in a production directed by Pavol Liska — who has never actually read Shakespeare's play.

We all know the story of Romeo and Juliet ... or do we? A new off-Broadway production tells the story of the star-crossed lovers without bothering with any of Shakespeare's hallowed words or intricate plot twists. Instead, it relies on the fuzzy recollections of people who read it in high school.

The show's creators called unsuspecting people on the phone and asked them what they remembered about Shakespeare's classic love story. The result is a hilarious mishmash of half-recalled quotes, mixed-up plot points and wild digressions — all performed in the traditional Shakespearean style. Romeo and Juliet is a production of the Nature Theater of Oklahoma and runs at The Kitchen theater in New York City until mid-January.

'Juliet Is The Sky, And I Am The Sun'

The play has all the trappings audiences associate with Shakespeare: a (fake) proscenium arch; frilly costumes; two star-crossed lovers over-enunciating every line. If only they could get them right.

Here are a few stabs at the dialogue from the famous balcony scene:

"Romeo, oh Romeo, where art thou Romeo. Something or something and you are the sun! I don't remember. I don't have it memorized."

"It is the East, and Juliet is the West."

It's OK. No one got it right. Pavol Liska, the co-director of the Nature Theater of Oklahoma, called up his friends and relatives out of the blue — "Pretty much everybody who would agree to be recorded," he admits.

He asked questions about love and the finer plot points of Romeo and Juliet, and his co-creator, Kelly Copper, edited the conversations down. The recorded responses, with their ums and ahs, misremembered quotes and hazy plot recollections, became the script of the new Romeo and Juliet.

"We ourselves weren't even able to remember what happened so we went kind of in search of it," Copper explains.

One of the performers in the company, Anne Gridley, got the call early in the morning.

"I should be able to tell this story," Gridley says. "I studied dramaturgy, I studied theater, I studied acting." And yet, she admits, she found herself "rather frustrated."

'Some Guy With A Very Flourishy Name'

"Did you ever see West Side Story? It's the same story but with Puerto Ricans and, like Irish-Americans, Italian-Americans," one interviewee explained.

Performer Robert M. Johanson gives the recollections the grand Shakespearean treatment — all tights and gesticulations. But that's the beauty of the show; everyday conversations are presented like poetry.

"People remember like an overall glaze of every famous story," Johanson says. "But they forget these very specific details that move the story along. And even things that are essential — like who dies first — are forgotten."

"Romeo gets in a fight with some guy with a very flourishy name like Euristhepis or something like that," one person recalled.

"He either takes some poison or stabs himself. I forgot how he kills himself," said another.

The best part of the interviews, the directors say, is when people start to make stuff up to fill the gaps in their knowledge.

"It's sort of like Anna Nicole," one befuddled interviewee explained. "You know, like, she went into the Bahamas. Do you remember when you found out about Anna Nicole? Yes, to me it's kind of like 9/11."

This particular monologue goes way off the rails. The woman who was interviewed for it came to see the production, and performer Gridley says the woman was shocked to see just how far off course she had gotten.

It's enough to send everyone rushing back home to read the play again. Everyone that is, except the creator, Liska — he's actually never read the Shakespearean classic.

"That's why I called people," Liska says. "Because I was actually curious. It was about stimulating people's creativity and really finding out what is inside our brains."

(Liska suspects the play was probably assigned to him at some point in high school but admits he "wasn't a very good student.")

So, for the rest of you bad students out there, listen up: Gridley offers the definitive four-second version of — (spoiler alert!) — Act 5 of Romeo and Juliet:

And, if my memory isn't failing me, some dude comes in and says, "Never was there a tale of more woe than Juliet and her darling Romeo." Or something like that.