Accessibility links
Will 'Get What You Want' Leave A Cultural Gap? "Get what you want, when you want it." That phrase has increasingly defined consumers' relationship to the entertainment industry as the past decade has unfolded. But are choice and convenience costing us a sense of common culture? Put another way: Would Seinfeld's "puffy shirt" make it into the Smithsonian today? 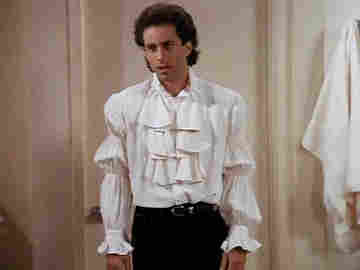 What Makes A Touchstone? Or: Would Jerry Seinfeld's puffy shirt make it into the Smithsonian today? NBC hide caption

Get what you want, when you want it. That's the phrase that has dominated the entertainment industry over the past decade. New technologies have given us access to countless channels for music, television and film — and we can sample them whenever we find it convenient. But as the options multiply, are we losing our sense of a common culture?

Take "The Outing," the Seinfeld episode in which a reporter thought Jerry and George were lovers. Even if you didn't see it — not that there's anything wrong with that — you heard about it: at work, at school, in the checkout line at the grocery store. And suddenly the show about nothing, says Stanford University communications professor Clifford Nass, meant something even to people who didn't watch it.

"That's really what marks cultural touchstones," says Nass. "Things that people are aware of; that they can share; that they can make reference to — that they don't actually have to consume themselves."

Over the past decade, the number of television channels has more than doubled. There's Lifetime for women, Spike for men, the Syfy channel, Comedy Central, yadda yadda yadda.

Add on YouTube and Facebook, Twitter and FunnyOrDie, and there's just a lot more stuff to keep track of than there was in the days when there were three main TV networks.

For better or worse, the likelihood of another Seinfeld gets smaller with each new source of content. And that, alongside similarly fragmenting landscapes in news, politics and culture, has social scientists worried.

"In history, as far as we can tell, there have never been cultures or societies in which there weren't a very large set of shared ideas — norms, values, stories" and so on, says Nass. "We've just never seen that before."

"The problem is, the things that tend to glue society together are people who share a number of things together," Nass says. "It makes it easier to mobilize, to bring people together behind a cause, behind an issue" — health care, say, or war.

Just look at the fractured response to health care overhaul proposals at town hall meetings across the country. Could it be that former President George W. Bush understood this when, rather than asking the country to pull together in shared sacrifice at the advent of the Iraq war, he instead told us to go shopping?