Accessibility links
Fishermen Reeling Over Red Snapper Fishing Ban A federal ban on fishing for red snapper, one of the most prized saltwater fish, is set to take effect Jan. 4 -- part of an effort to bring back the species in the Atlantic Ocean. But coastal fishing towns that rely on business from anglers say the ban could take a huge economic toll. 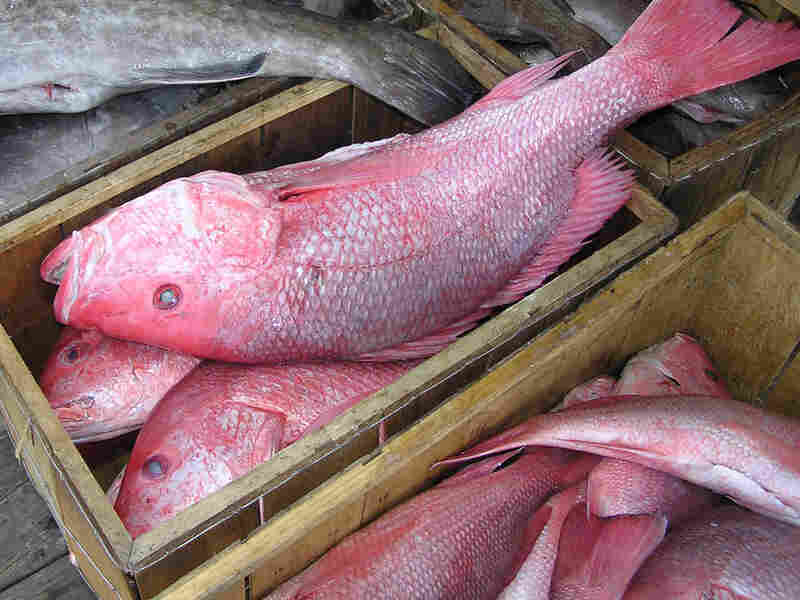 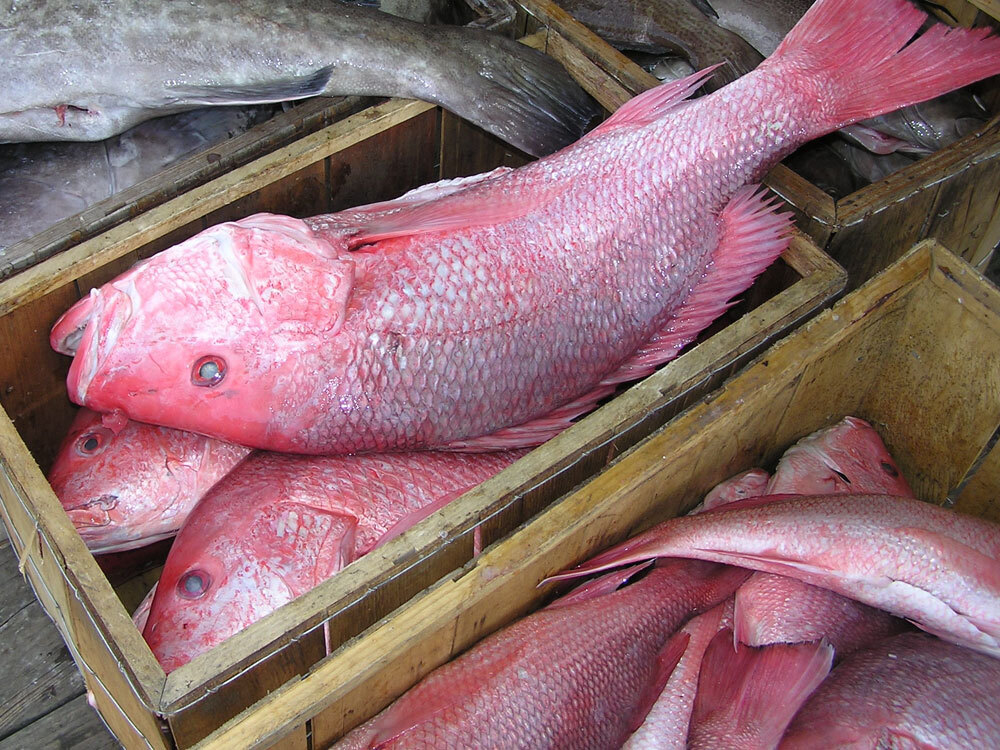 In Florida, Georgia and the Carolinas, a new federal rule has fishermen angry. A ban on fishing for red snapper--one of the most popular saltwater fish — starts Jan. 4.

Federal agencies and environmental groups say that in the south Atlantic, red snapper numbers are dwindling. So along with the ban, officials also propose temporarily closing a huge area to virtually all fishing.

To people who don't fish or don't live in the Southeast, it might seem like a lot of fuss over one species. But in fishing communities like St. Augustine, Fla., the red snapper is more than just a fish.

It's the reason thousands of anglers visit each year. The new rules are a blow to coastal communities around the Southeast, like St. Augustine, that depend on recreational fishing.

Robert Johnson is a charter boat captain who has fished for red snapper off the eastern coast of Florida for nearly 30 years. When his charter business slows down, he also fishes for them commercially.

According to Johnson, the average snapper measures around 2 feet long and weighs between 6 and 7 pounds. But he says he has caught fish that weigh up to 30 pounds.

Red snapper can live to 50 years old and grow to 20 pounds or more. But fish that old — and big — are very rare — a clear indication, scientists say, of how much they've been overfished.

Today, the National Marine Fisheries Service estimates that the population of red snapper off the Atlantic Coast is just 3 percent of what it was 60 years ago. Citing these numbers, the service has put in place a six-month interim ban on fishing for red snapper with an option to extend it further.

Roy Crabtree, regional administrator for the National Marine Fisheries Service in the Southeast, says that the science leaves little doubt that the population of red snapper in the south Atlantic has been severely depleted.

"I think the only real debate is the extent of the overfishing," Crabtree says. "But I don't believe there is a whole lot of scientific debate about whether the stock is undergoing overfishing or is overfished."

Johnson and others in the recreational fishing industry question the methodology used to estimate the red snapper population.

Their doubts are supported by the National Research Council, which has called into question the government's process for estimating catches and fish populations.

Johnson believes that while red snapper have been overfished, limits on catches have done a lot in recent years to help rebuild the species.

"They still keep claiming that we're fishing at eight times the sustainable rate, and I just don't see that being true," Johnson says. "If that was the case ... the amount of fish we're catching per trip would fall. It would not be consistently the same over the last 10 years. And it definitely would not be getting better."

For Johnson, there's a lot at stake. He says at least 60 percent of his customers come out to fish for red snapper or other bottom species like grouper, which are also now off-limits. And even more alarming than the red snapper ban is another proposal now being considered, which would close some 10,000 square miles of the Atlantic, from North Carolina to Florida, to virtually all fishing. 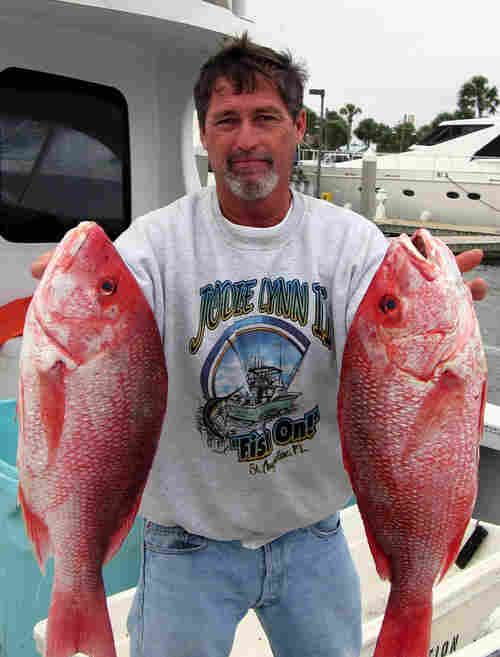 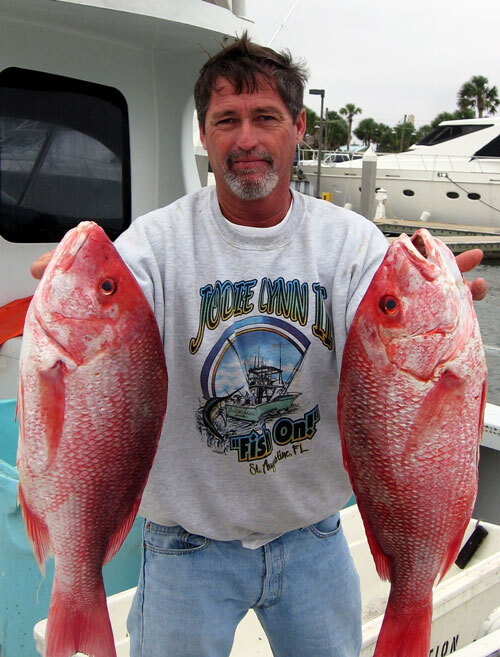 Johnson says that will very likely put him and the two dozen other charter captains in the town of St. Augustine out of business and take a toll on the restaurants, hotels and others in town who benefit from the influx of anglers.

Holly Binns, with the Pew Environment Group's campaign to end overfishing in the Southeast, says people who want to fish will still have other options.

"I think it's important to keep in mind that 80 percent of what recreational fishermen caught in the waters off the coast of these four states last year will still be open to fishing," Binns says.

She concedes, however, that communities in areas like St. Augustine that depend on red snapper will be the hardest hit.

That's something Dave Workman already knows. He owns the Strike Zone, a fishing outfitter in Jacksonville that carries everything from reels and tackle to kayaks. He says customers have already stopped buying fishing tackle and he expects business to get much worse once the red snapper ban goes into effect.

Like others in the industry, Workman thinks the government has greatly underestimated the ban's economic impact. He estimates that the losses to his two stores as a result of the ban will be more than $300,000 per year.

A group called the Recreational Fishing Alliance has filed a lawsuit seeking to block the ban on red snapper fishing from taking effect on Jan. 4 as planned. Federal regulators may decide whether to approve the larger area ban when it meets in March. Meanwhile, a bipartisan group in Congress from coastal districts is working on a bill that would require federal regulators to consider the impact on local economies before ordering future fishery closings.