Accessibility links
No Fear Of Flying? Makes Perfect Sense, Experts Say In the wake of the unsuccessful Christmas Day terrorist attack on a Northwest flight bound for Detroit, many Americans seemed to react with a collective shrug and some humor. Experts say the reaction is perfectly appropriate to the risk level shown so far. 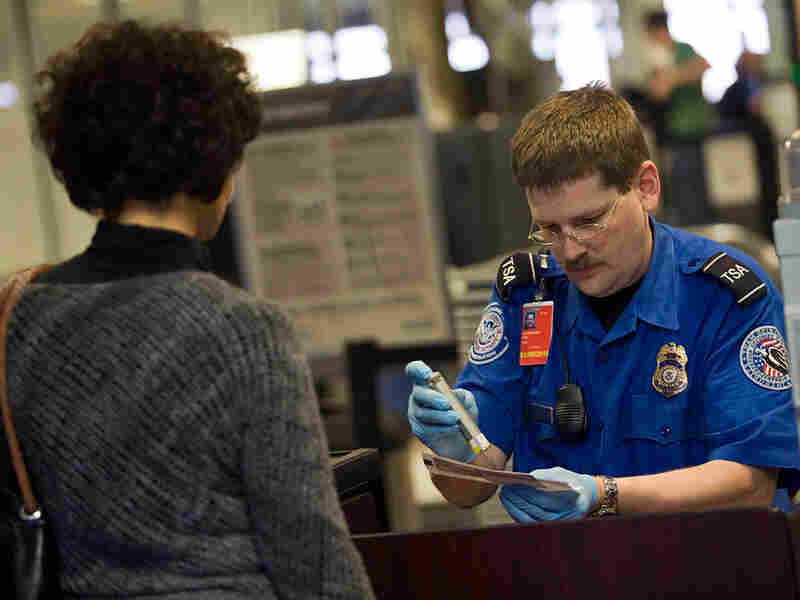 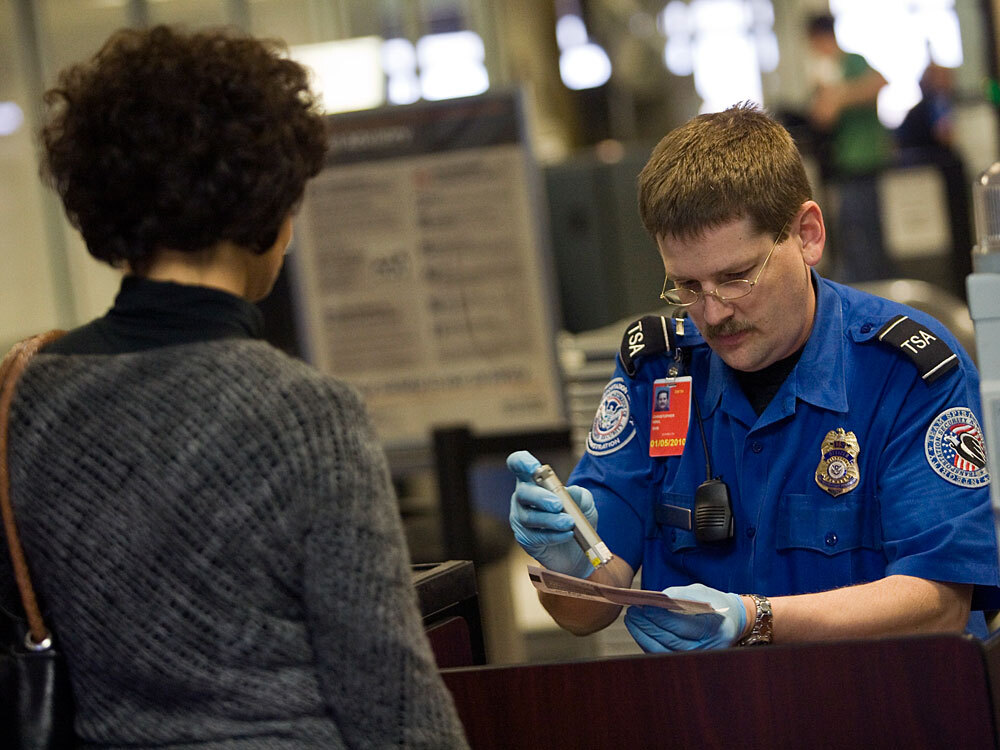 A TSA officer screens an airline passenger in Terminal C at Dallas/Fort Worth International Airport on Sunday.

In the wake of the unsuccessful Christmas Day terrorist attack on Northwest Flight 253 bound for Detroit, many Americans — with the exception of political partisans — seemed to react with a collective shrug and some humor.

"Great Balls of Fire" screamed the New York Post about Nigerian Umar Farouk Abdulmutallab's failure to ignite an explosive device in his underwear, though he succeeded in burning himself.

And some travelers are already pushing back on proposed in-flight restrictions they view as having questionable safety implications — including expanding limits on the use of both laptops and toilets.

Which raises the question: Have Americans, in a post-Sept. 11 world, become a bit blase about terrorism in the sky?

After all, Abdulmutallab's effort to blow a hole in a plane carrying 278 passengers was indeed serious, and serious questions are being asked about how he managed to get so close to succeeding and whether al-Qaida was involved.

But risk experts say that Americans are simply reacting — by not overreacting — in a way that reflects the circumstances.

"The response makes absolute sense given the evidence, the nature of this weekend's events, and this risk in general," says David Ropeik, a risk communication consultant and instructor at Harvard University.

How We Perceive Risk

The perception of risk, Ropeik says, depends on circumstances and context — and humans adjust to both.

We have ... adjusted emotionally after Sept. 11 to the risk of airplane terrorism — even though, statistically, the risk of flying was the same before the attacks as after the attacks

In this case, Abdulmutallab appeared to be just another inept guy who, like December 2001 attempted shoe bomber Richard Reid, couldn't make his explosive work. And whose attempt was not followed immediately by copycats.

"That made this one seem less scary," Ropeik says. "We have also adjusted emotionally after Sept. 11 to the risk of airplane terrorism — even though, statistically, the risk of flying was the same before the attacks as after the attacks."

And that risk is microscopic, statistics show, compared with other death risks faced by Americans, including heart disease and murder.

Because Abdulmutallab's attack failed, it did not acquire what risk analysts call the "dread quality" — one that creates strong feelings of fear and increased perception of risk, says Paul Slovic, a psychology professor at the University of Oregon.

That dread quality, Slovic says, influences efforts taken to prevent such an occurrence from happening again. And it can lead to what some researchers and scholars have called "probability neglect" — reacting with excessive tactics to risks that have a statistically low probability of occurring.

Among the first to apply the concept of probability neglect to terrorism was legal scholar Cass Sunstein, now an official in the Obama White House.

In a 2003 article in the Journal of Risk and Uncertainty, Sunstein argued that when strong emotions are involved, people tend to focus on the badness of the outcome, rather than on the statistical probability that the outcome will occur.

He said that terrorists know to exploit the gap between the real and imagined risks of a catastrophic attack, and argued that the government should strive to reduce — not increase — fears that are statistically unjustified.

Could the administration have been trying to avoid "probability neglect" when it made an early misstep in responding to the Christmas Day event by downplaying potential problems with airline passenger screening systems?

A USA Today/Gallup poll conducted two weeks before Christmas showed that 39 percent of Americans say they are worried that they or a family member will become a victim of terrorism. That number stood at 59 percent after Sept. 11 but has remained in the 35 to 45 percent range in recent years.

Homeland Security Secretary Janet Napolitano's initial assessment that "the system worked" prompted widespread disbelief and criticism. After all, an alleged terrorist got on an American airliner with enough explosive material to take it down.

Napolitano quickly amended her statement, but she and the administration now stand accused by detractors of spinning the incident.

Risk expert Baruch Fischhoff of Carnegie Mellon University says that the accusation is the opposite of criticism leveled at the Bush administration.

"The Bush White House was often accused of hyping the problems," Fischhoff says, "while [Napolitano] seems to be accused of downplaying them."

Bottom line for the Obama administration, Fischhoff says: "People want to know that their leaders know how to do their jobs and are providing the information that the public needs to make the best possible choices."

On Tuesday, the administration may have taken a needed step in that direction – by acknowledging how close catastrophe had been. In strong comments from Hawaii, where he is vacationing with his family, President Obama said that "a systemic failure" allowed the 23-year-old Nigerian to board an airplane with explosives. And he said that it is "essential that we diagnose the problems quickly."

While Americans now seem to be taking the terrorist incident largely in stride, it's too early to predict whether that equanimity will hold.

A USA Today/Gallup poll conducted two weeks before Christmas showed that 39 percent of Americans say they are worried that they or a family member will become a victim of terrorism. That number stood at 59 percent after Sept. 11 but has remained in the 35 to 45 percent range in recent years.

Risk experts like Slovic, who also heads a nonprofit research association, are now looking for what they call the "signal" in the set of events, or evidence that risk may have increased in some way.

"What's the signal in this story — how has the world changed?" Slovic says.

And how, experts are asking, will that affect anxiety and the perception of risk?

In the nation's recent financial meltdown, for example, the perception of risk increased because people managing risk weren't doing a good job, and the public couldn't trust the institutions or government for oversight, he says.

It's not yet clear what the signal will be from the Northwest incident.

Is screening inadequate? Should watch lists be utilized more aggressively? Was al-Qaida involved? Has the nature of the threat changed? Why didn't they catch this guy?

The answer to those questions will either reassure American travelers that the risk of flying has remained the same and that officials are fixing problems, or it will instill fear in those who mistrust the government's ability to respond.

Until then, Slovic says, people will fly simply because they have to fly.

What matters the most right now in people's perception of risk was that "nothing really bad happened" this time, Ropeik says.

"Over the last several years we have gotten used to this as a risk, but a relatively low one," he says. "Let's not forget, that is entirely rational."