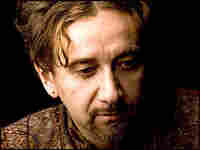 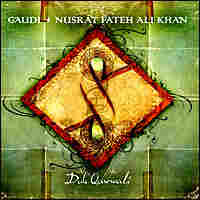 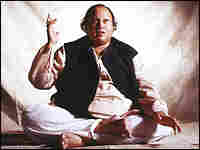 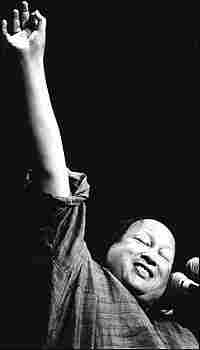 Resurrecting the dead is nothing new in music. Remember Natalie Cole singing and dancing with her late father, Nat King Cole? The latest luminary to be revived is the Pakistani singer Nusrat Fateh Ali Khan. August 16 marks the tenth anniversary of his death.

In his short life, Nusrat was the world's greatest singer of qawwali, a boisterous and passionate music of mystical Islam. He embraced western pop music, teaming up with Peter Gabriel and Eddie Vedder. Now, Nusrat returns with the help of Italian dub reggae producer Gaudi. Their new CD is called Dub Qawwali.

Gaudi is a veteran producer with 11 solo albums over the past two decades. He specializes in dub reggae, a style that often reworks existing material, mixing booming bass and drums with electronic effects.

After dabbling in punk music, Gaudi began experimenting with synthesizers, and was fully steeped in reggae when he first heard one of Nusrat Fateh Ali Khan's records in the mid-1980s. By this time, Khan was already being called the "Emperor of qawwali."

Gaudi displays an appropriate reverence for the emperor, a fact that most likely helped him when he approached Khan's old record label. Gaudi says he was thrilled when they gave him full access to original 40-year-old reel-to-reel tapes of unreleased Nusrat sessions.

"It was incredibly emotive for me, seeing the writing, handwriting and everything, I had goose bumps, really," Gaudi recalls.

He took the tapes and worked some studio magic, removing unwanted instruments and laying the bare vocal tracks over his own beats. It was a daring venture, to be sure, but Gaudi says that in all that tinkering, his aim was not to adapt Khan's music to his own beats, but exactly the other way around. He was even careful to preserve the message of Khan's music.

"I couldn't understand what he was thinking about," Gaudi says, "so I had to employ a translator. And making sure that all the vocals that phonetically for me sounded great, even meaning-wise made sense."

That's part of the reason the record took Gaudi two years to make. He says he spent months just listening, before touching anything. And in the end, his careful study convinced him that he could safely use Jamaican dub beats without compromising the spirit of Khan's music.

"Because the message of that music and the message of reggae is exactly the same," Gaudi says. "It's peace, love, and spirituality. So that was my common denominator for me, just to try and unify the two elements."

Still, as harmonious as it felt to him, Gaudi says sometimes felt he should abandon the project.

"I know already that whatever I do with this music," Gaudi says, "it will not be as beautiful as the original material, and that's for sure. So I was about to give up. And the same feeling happened when I remixed Bob Marley four years ago. It's bigger than me, bigger than anything I did so far."

But he went ahead, trying to imagine that Khan's spirit was there with him in the studio. After all, Gaudi says, the studio is his "temple."